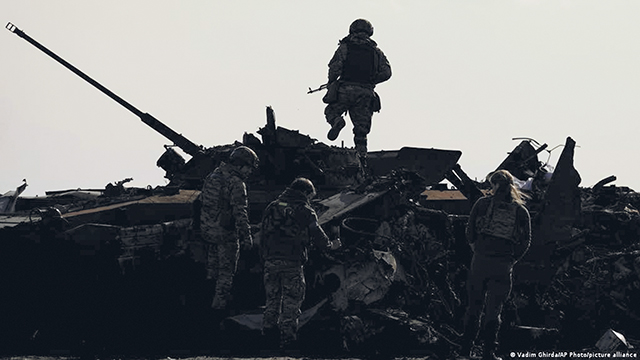 After sweeping through Luhansk, Russian forces are gaining ground in the neighboring Donetsk region. Both are part of the industrial Donbas heartland of eastern Ukraine that Moscow is seeking to control. Donetsk’s regional governor is urging the area’s 350,000 residents to evacuate as Russia intensifies its bombardment campaign, “The destiny of the whole country will be decided by the Donetsk region,” he said.

Russian forces are about 10 miles north of the strategic city of Slovyansk in Donetsk, making it likely to be the next key battleground, according to Britain’s Defense Ministry.

Luhansk regional governor Serhiy Haidai said the recently captured cities of Severodonetsk and Lysychansk are still reeling, with thousands of civilians now living under Russia occupation. “Overall, over 300,000 people have left the Luhansk region” since Russia’s February 24 invasion, he said Wednesday. He vowed: “We will return. We will rebuild everything.”

In the recently captured city of Severodonetsk, “around 8,000” residents remain, while “up to 15,000” are still in the nearby city of Lysychansk, which fell to Russia over the weekend, Haidai said. But he added that evacuating the front lines in Luhansk was the right decision and said Ukrainian troops did a “good job.”

He noted that the robust defense of Luhansk for more than four months also bought time for those defending Donetsk and slowed Russia’s campaign in the strategic region.

The latest developments include:
• The French government plans to nationalize its nuclear giant EDF amid an energy crisis exacerbated by Russia’s invasion of Ukraine.
• Latvia’s Defense Ministry has proposed a return of mandatory military service for young men, citing the Russian threat as among the motivating factors.
• Secretary of State Antony Blinken is heading to Indonesia for a gathering of the Group of 20 Foreign Ministers (G-20) this week that will focus on food and energy security. A traditional one-on-one meeting with Russian Foreign Minister Sergei Lavrov is not on the agenda, according to the State Department.

Blinken speaks to Ukraine’s Kuleba ahead of G-20 meeting
US Secretary of State Antony Blinken spoke with Ukrainian Foreign Minister Dmytro Kuleba ahead of the G-20 foreign minister meeting in Bali, Indonesia.

“With two-thirds of the children in the country on the move, I would say every single child in Ukraine, has had their lives touched by this war. They’ve either lost a family member or they have witnessed trauma themselves,” Afshan Khan, the regional director for the UN Children’s Fund (UNICEF), told reporters.
Khan also said that the staggering number of schools destroyed by Russian strikes in Ukraine presents another grim challenge for child development.