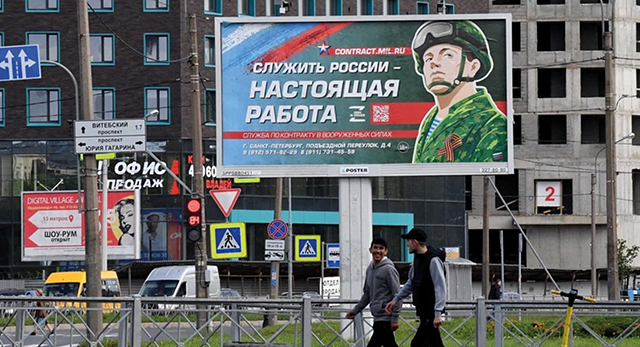 Young men walk by a sign saying “To Serve Russia is the real job” in Saint Petersburg. Source: AFP

Across Russia, men have begun their training in response to President Vlaidimir Putin’s decree ordering “partial mobilization.” According to the order, men with prior military service, younger than 35 years of age, and not currently studying at a university, are required to report to their local recruitment office to fulfill their patriotic obligations. Russian Defense Minister Sergei Shoigu said in an interview that the number of these recruits could number as many as 300,000. This came alongside his admission that they have lost 5,937 service members in the Ukrainian conflict so far.

In a video address, Putin said the act, the first of its kind since the Second World War, was in reaction to Western aggression. He stated that the “goal of that part of the West is to weaken, divide and ultimately destroy our country.” In announcing his order, Putin stated “I find it necessary to support the proposal of the Defense Ministry and the General Staff on partial mobilization in the Russian Federation to defend our Motherland and its sovereignty and territorial integrity, and to ensure the safety of our people and people in the liberated territories.”

However, many have seen this as an unjust overreach and a move that sends themselves, their brothers, fathers, and sons, into an impossible war. Over 38 towns and cities have seen anti-mobilization protests. Russian law enforcement has taken intensive measures to quell this dissent, as videos across social media show batons, pepper spray, and fists being used to subdue protestors.

In addition to this, a mass exodus is ongoing in the country. Lengthy columns of cars and people on foot have been seen at the borders of Georgia, Kazakhstan, Mongolia, and, until recently, Finland. While Finland and other European nations have shut their borders to those seeking asylum from the mobilization order, long wait times still persist at the few remaining nations.

Russia has set the parameters of the mobilization order, but several open sources report that the violations of this are numerous. Old men and pensioners, students with no military service, protesters, and even a journalist have been given summons to report for training. Despite calls from the Kremlin that these oversights would be corrected, even retired commanders have been seen reporting for duty with no idea of what they are being called to do. One notable officer was witnessed saying so to his men, unable to explain what will happen to them, according to a series of videos recorded in secret by a new recruit.

In these new recruits being briefed on their new temporary careers, the commissars giving these introductions are curt. Two weeks of training and a likely deployment to Ukraine are what these impromptu soldiers will expect. While many mainstream and state-owned media have shown images of new uniforms, clean barracks, and hearty meals being given to these men, social media has shown the reverse. Outdated and rusty weapons, leftover Soviet-era kit, sleeping on floors or in prison-like conditions, and rampant alcoholism have been showcased in videos filmed by the recruits themselves.

The plethora of open source information has outweighed the Kremlin’s narrative of a small force being pulled into reserve only to be used in emergencies inside the state. Their deployment in Ukraine, although likely only in defensive roles, would only cause higher casualty rates, sap more resources from the overstretched supply lines, and cause more uproar at home. What small gains could be made by bringing reluctant and under-trained troops to the line are few and far between.

The recent referendums in Russia’s occupied territories in eastern and southern Ukraine coincide with the mobilization order. Despite virtually all countries claiming to not recognize the results of the votes, all four regions have all but unanimously elected to become a part of the Russian Federation. The conclusions of this move and its recognition by the Kremlin are predictable.

According to Russian law, these mobilized men and other conscripts are not able to be deployed outside of Russia proper. While it wouldn’t be unusual for Putin to ignore constitutional requirements, it would be viewed as a grave offense socially across the country, soiling what little legitimacy the operation in Ukraine still has. By recognizing Luhansk, Donetsk, Zaporizhizhiya and Kherson as sovereign Russian territory, it would open the door for these new troops to be sent in to reinforce the battered units there now and still have legal grounds.

300,000 is a significant number in terms of military manpower. For comparison, at the height of operations in Iraq, the United States had approximately 170,000 service members in the country. This high number may be difficult to achieve in a meaningful time period. Summoning, training, and deploying these mobilized troops takes time, even if they are rushed through training as they seem to be.

If this number is attempted, it may have a significant effect on Russia’s already fragile economic and industrial sectors. Reports abound that Russia’s military technology industry has suffered not only by a shortage of microprocessors and materials, but also manpower. Pulling more working-age men from the production line may constrict the ability to produce.

The new group of mobilized troops may also suffer from reliability on the battlefield. It’s easy to note that high hopes and smiles may be on display when reporting for service. However, once the brutal and bloody front inside Ukraine is reached, it’s likely that at least 10% will begin to have second thoughts. The snap of the first round passing by one’s head, or the thundering din of sustained artillery, will most assuredly cull this heart naturally.

Putin and his staff may have already seen this in effect earlier in the war. As a result, some steps may have been taken to minimize the effect of this upcoming “realization sickness.” It seems to be evident and pre-calculated, as Moscow instituted a schedule of specific punishments for activities such as avoiding service and malingering, purposefully surrendering to the enemy, and pillaging.

Those online have made the comparison to the popular “meatgrinder” term to the partial mobilization order. The effectiveness of these new soldiers is unlikely to be anything but a tragic rise in the death toll, increase of single motherhood rate, and future contraction of the economy in Russia. In an obvious flailing attempt to save face, Putin has crossed a proverbial Rubicon with not only Ukraine, but NATO and the West.

In his clear desperation, as the saying goes, one must always be wary when approaching a dying beast. Just as Caesar crossed the Rubicon, perhaps this is the catalyst that will see Volodya’s fate ultimately end at the tip of a dagger, clutched by the hands of his own men.