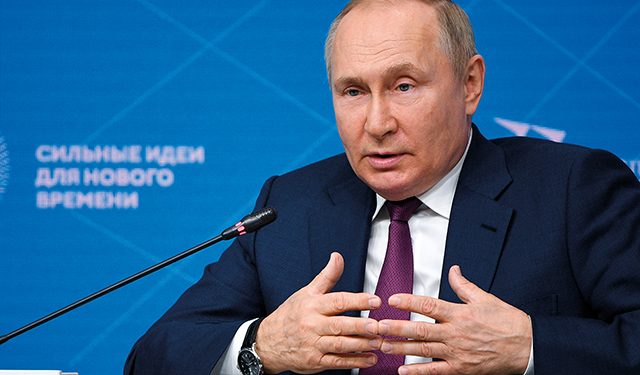 The Lviv region in western Ukraine was quiet overnight, said governor Maksym Kozytskyi on Thursday, with no air raid alerts. 229 people had arrived in the region on evacuation trains from the east of Ukraine, and 787 departed for Poland.

Oleh Synyehubov, Governor of Kharkiv, posted a message to Telegram on Thursday morning saying “The Russians are striking Kharkiv” and instructing people to stay in shelters.

He said Russian missile strikes in the eastern Ukrainian city of Kharkiv killed three people on Wednesday, a man, a woman and a 13-year-old boy.

Vitaliy Kim, Governor of the Mykolaiv region, posted a status update for his region on Thursday in which he said “villages located on the demarcation line remain under constant shelling.”

“Russia is prioritizing the capture of critical national infrastructure, such as power plants.

“However, it is probably also attempting to break through at Vuhlehirska, as part of its efforts to regain momentum on the southern pincer of its advance towards the key cities of Kramatorsk and Sloviansk.”
Russian forces destroyed two schools in the Donetsk towns of Kramatorsk and Kostiantynivka overnight Wednesday, Ukrainian officials say.

Pavlo Kyrylenko, head of the Donetsk regional military administration, shared photos of the destruction in a Telegram post.

“Russian occupiers destroyed two schools today – in Kramatorsk and Kostiantynivka,” he said, adding that an industrial area in Kramatorsk was also hit.

CIA: About 15,000 Russians have been killed
Russian casualties in Ukraine so far have reached around 15,000 killed and perhaps 45,000 wounded, CIA director William Burns said.

“The latest estimates from the US intelligence community would be something in the vicinity of 15,000 (Russian forces) killed and maybe three times that wounded. So a quite significant set of losses,” Burns said.

“And, the Ukrainians have suffered as well – probably a little less than that. But still significant casualties.”
Russia classifies military deaths as a state secret even in times of peace, and has not updated its official casualty figures frequently during the war. Ukraine has also said it will not be releasing the numbers of Ukrainian casualties, however, Kyiv said in June that 100 to 200 Ukrainian troops were being killed per day.

US officials said on Tuesday that it had seen signs Russia that is preparing to formally annex territory it has seized in Ukraine.

“(We) will keep finding innovative ways to sustain our long-term support for the brave men and women of the Ukrainian armed forces and we will tailor our assistance to ensure that Ukraine has the technology, the ammunition and the sheer firepower to defend itself,” Austin said at the start of a virtual meeting with allies on Ukraine.

In a press conference after the meeting, Chairman of the US joint chiefs of staff general Mark Milley said Ukraine had used Himars to hit Russian command and control nodes, logistic network and air defense sites within Ukraine.

Austin said the new package would also include rounds for Multiple Launch Rocket Systems as well as artillery munitions.

The United States has provided $8bn in security assistance since the war began, including $2.2bn in the last month.