Russia, the Middle East and the Changing World Order 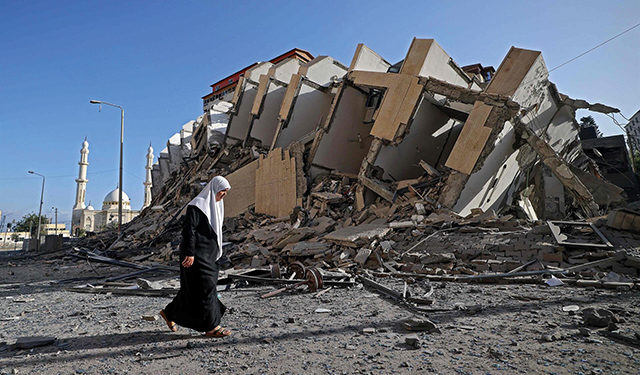 The latest escalation between Israel and Palestine initially seemed to have a local character: another round of violence. But, increasingly, reactions from major global and regional players says a lot about the changing global order. An important actor in the unfolding crisis would be Moscow, which would fortify its bargaining position to extract concessons from the West in other regions of geopolitical interest.

Russia is the player to watch. As rockets were falling on Israel and the latter retaliated, Moscow called on Israel and Hamas to exercise restraint. Russia’s statements not only seemed inconspicous but tended to reflect the thinking of many other states. In reality though, Moscow is a critical player. Putin, in a meeting with government officials, said the latest escalation directly concerns Russia.

Following its involvement in Syria and successful operation of its peacekeeping mission in Nagorno-Karabakh, Russia could position itself as a nimble power to manage intractable territorial crises. To this should be added America’s inability, following Trump’s peace plan, to present a long-lasting solution to the Israel-Hamas stalemate.

Russia has its own calculus. All moves made by Moscow in the Middle East are aimed at strengthening the Kremlin’s position in the region. Another feature of Russia’s approach to the crisis has been its consistent efforts, despite being a member of the Middle East quartet (along with the EU, US, and United Nations) on settlement to consistently try to undermine the role of the other parties. When the Trump administration proposed a peace plan for the Israeli-Palestinian conflict, Russia (as it had with many other American initiatives) flatly rejected it, citing “one-sidedness”. Russia increasingly sees itself as a potential arbiter in Middle East peace negotiations.

But what is more important here, Russian efforts reflect the changing world order, where the collective West is no longer seen as a primary, decisive actor in the resolution of crucial crises around the globe. For instance, Putin urged Israel and the Arabs to cease fighting during a call with his Turkish colleague, Recep Tayyip Erdogan.

“Serious concern was expressed about the continuing clashes and the growing number of people killed and wounded,” the Kremlin said in a statement, adding that Putin had “called on the parties to de-escalate tensions and peacefully resolve the emerging issues.” The Turkish President mentioned the need to have a peacekeeping mission sent to the place to prevent further violence. Erdogan asked Putin to support this initiative, drawing attention to the commonality of views of Moscow and Ankara in the context of the emerging crisis.

The fact that the positions of the two countries are close was proven by the statements from the Russian side on adherence to the UN Security Council resolutions, which relate to the illegality of the expropriation of Palestinian lands, as well as support for the two-state principle, Erdogan said in a conversation with Putin. It is not the first time that statements regarding sending a peacekeeping mission to the Gaza Strip have been floated by the Turkish leadership. Erdogan expressed the idea in 2018 at the summit of the Organization of Islamic Cooperation, when confrontation erupted between Israelis and Palestinians following the opening of the American Embassy in Jerusalem.

The underlying trend is clear: Regional powers working together to squeeze out the collective West. In many cases, in Nagorno-Karabakh, for instance, it was successful. In Israel-Hamas, the case will be tougher, but the efforts by the outside, non-Western powers to act, is nevertheless symptomatic of the extreme fluidity of the international system. Moscow pursues the formation of such a system of international relations, where the “great powers” have more rights and can dictate their decisions to weaker participants in world politics.

Crises create opportunities, and Moscow expects that the more violent the conflict gets between Israelis and Arabs, the more the US will have to be involved in the process and seek Russia’s benevolence. This, in turn, could be used for extracting geopolitical benefits on the Ukrainian front or elsewhere.

Indeed, Russia enjoys a peculiar position in the Israeli-Arab conflict. Moscow historically has nurtured close ties with Hamas. First, Hamas, an offshoot of the Muslim Brotherhood organization banned in the Russian Federation, has not been banned itself. This is all the more interesting as Hamas, according to various unconfirmed sources circulating in the Russian media, allegedly participated in the preparation of the terrorist attacks in Russia during the war in Chechnya.

There is even suspicion that when fighting between Hamas and Israel breaks out, the Russian position has tended to be balanced, signaling that Moscow’s behavior is motivated by a larger geopolitical calculus. Russia’s close ties with Hamas were often a source of friction between Russia and Israel. Even during the latest escalation, Russian deputy FM Mikhail Bogdanov held a telephone conversation with the Deputy Chairman of the Hamas Politburo Moussa Abu Marzouk. As the Ministry of Foreign Affairs of Russia stated, the dialogue took place on the initiative of the Palestinians. This causes concerns in Israel and at times affects its ties with Russia.

Unfolding tensions between Israel and Hamas will not change Moscow’s position: it will keep friendly ties with both sides of the conflict, hoping to strengthen its bargaining position vis-à-vis Israel and the US in particular. Russia will try to increase its influence via cooperating with regional powers which are interested in sidelining the collective West from the conflict resolution. What is crucial is that the unfolding crisis reflects the transformation of the world order and how old norms, bargains and the prestige of the collective West is in trouble, ushering in an area of greater competition from illiberal states with alternative mechanisms for solving vital territorial conflicts.