Russia in the South Caucasus: Between Omnipotence and Fragility 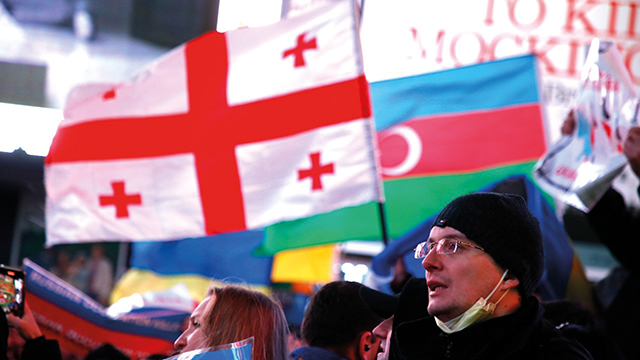 Russia’s position in the South Caucasus is not as solid as is often presented. Image source: cepa.org

Over the past two decades Russia in the South Caucasus has achieved much militarily, but its prestige as a power has been decreasing. This happens at the same time as the reliance on the military elements in formulating its foreign policy toward the region drastically increases. The result is a very shaky position built solely on hard power.

Russia’s position in the South Caucasus is seen as solid, especially following the second Nagorno-Karabakh War of 2020, when some 2000 Russian peacekeepers were stationed in Nagorno-Karabakh. Moscow now enjoys an unparalleled influence: It has four military bases in the three South Caucasus states, leaving little space for outside powers to move in. Here, Russia’s military power puts a particular constrain on NATO and US forces’ ability to play an active role in the wider Black Sea region.

But beneath this seemingly powerful position lurks long-term problems. Some are already visible, while others are likely to be forthcoming. Ultimately, Moscow’s position is far from being well grounded. It is increasingly dependent on the military element and is less interested and in fact is far from being able to use other tools to maintain its position in the South Caucasus.

One of the most striking developments underlying Russia’s rather unstable position is the nature of peace it has introduced, which is essentially a geopolitical peace, meaning that it is highly unstable and probably short-lived. Reasons vary, but critical here is to understand that constructing long-term peace requires genuine political willingness, prestige, and a record of untarnished leadership. Moscow is not genuinely interested in the resolution of the conflict because final resolution would limit its projection of power.

Therefore, geopolitics are driving the Kremlin’s thinking. Military and geo-economic considerations prevail over regional security needs. Then comes simmering tensions between Armenia and Azerbaijan. Discord between Yerevan and Baku allows the Kremlin to utilize benefits which have so far remained elusive. Tensions are a perfect tool to persuade both Armenia and Azerbaijan for the need to prolong the peacekeepers’ stay, and perhaps even increase the number of Russian troops.

Russian peace is geopolitical because it views the railway revival project, announced as part of the November 2020 deal between Russia, Armenia, and Azerbaijan, primarily through a military lens. It does raise the issue of restored economic connections, but the credibility of Russian hopes of beneficial trade with Armenia and Turkey through railway links are far from clear. With Turkey, it is more comfortable to trade through the Black Sea; with Armenia, the Georgian route, though at times unreliable because of weather, has nevertheless worked for decades.

Therefore, Russia is interested more in the military element of the restored railway routes. This would allow Moscow to penetrate the South Caucasus at will to mitigate the blocking power of the Caucasus range. The ability to reach Turkish and Iranian borders are at the heart of Russia’s military strategy.

Another element where Russia might be losing in the longer term is Armenia. Dependent on Russia economically and militarily, Yerevan’s ongoing talks with Ankara seem to be proceeding swiftly, with much ebullience deriving from both sides. The Russian troops’ position in Armenia will not be undermined perhaps even in the longer term, but with the opened border with Turkey, Armenia will have a new market for its products and businesses, allowing the country to diversify its economy, lessening dependence on Russia and the route through Georgia. Thus, economic and connectivity diversification equals the diminution of Russian influence in the South Caucasus. Russia is unable to prevent other powers from entering the region, and Turkey is a fine example.

But perhaps what best reflects Russia’s changing position in the region is what order it might be hoping to shape for the South Caucasus. Here, some thoughts on the global processes could shed light on Moscow’s thinking. As the world will likely consist of two large centers, the US and China, those will be surrounded by several closely aligned countries. The recent Australia-UK-US tripartite alliance agreement (AUKUS) is one of Washington’s steps towards this end. In addition to China and the US, Russia, India, Turkey and Iran will try to build small near-geopolitical zones along their borders. But their efforts will be largely tied to the interests of Washington or Beijing. The future world order is thus likely to be more chaotic. It will also be hierarchical, with China and America playing a leading role, and others having a lesser impact. Nevertheless, this will form the Eurasian order.

The South Caucasus will be at the center of these global changes, as the region is bordered by three major players of the Eurasian continent: Russia, Iran and Turkey, and the three countries are driven by regional ownership ideas. The new world order will lead to the establishment of a new order in the South Caucasus, which Russia is likely to pursue. Cognizant of its limits that it is impossible to create an exclusive order similar to what the Romanovs or the Soviets did before, Russia has to concede some aspects of its ambitions and carry out a more nuanced foreign policy. The order will be based on a closer cooperation with Turkey and Iran. Moscow hegemony will be recognized by Ankara and Tehran. These two powers too will have their major interests acknowledged by Moscow. The order will likely be characterized by a mixture of competition and cooperation, as was the case with these three powers elsewhere. Overall, though, red lines established by the three powers will be largely respected. Regional ownership will be a driving force minimizing disagreements and maximizing incentives to cooperate.
All in all, Russia’s position in the South Caucasus is not as solid as is often presented. It is fluid, and Moscow must constantly adjust to rising challenges to prevent loss of influence. Increasingly, however, maintaining influence in the region is achieved through the creation of a larger number of military bases, a clear example of which is the deployment of Russian peacekeepers in Nagorno-Karabakh. To many, this speaks of power, but it also betrays weakness and inability to manage problems through the prestige so inherent to any aspiring great power.