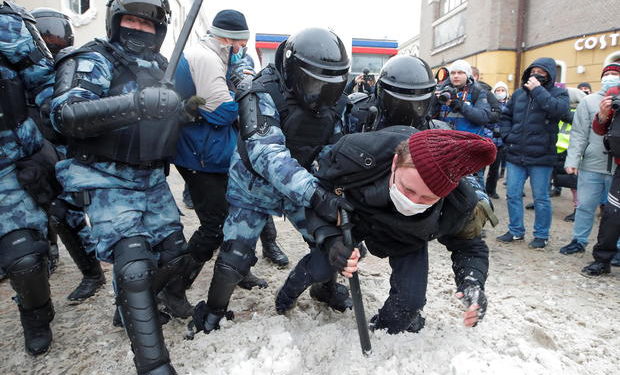 Police detained more than 4,000 people across Russia on Sunday during mass demonstrations, with protesters demanding the release of jailed Kremlin critic Alexei Navalny.

More than 4,700 people were detained by police, a monitoring group said, and some were beaten.

Yulia Navalnaya, the wife of Navalny, was also detained in Moscow on Saturday in parallel with the rallies held in support of her husband.

She was released from detention later on Saturday.

Despite the mass arrests and pressure from the authorities, Navalny’s supporters plan another protest in Moscow on Tuesday, when he is set to face a court hearing that could send him to prison for years.

Navalny himself is currently being held in pre-trial custody. He was detained at the airport late at night on January 17 upon returning to Russia after being poisoned with a nerve toxin and months of treatment in Germany.

The anti-corruption campaigner was nearly killed in the posoning attack in August last year. Navalny, 44, says the poisoning was ordered by Russian President Vladimir Putin. The Kremlin denies any involvement.

Experts in Germany, where Navalny was being treated, concluded that he was poisoned with Soviet-designed nerve toxin Novichok.