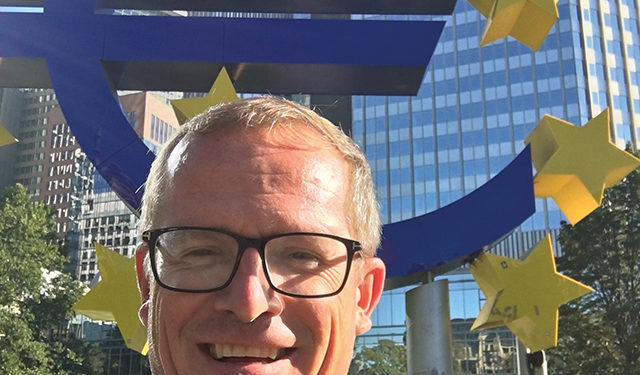 Gunter Fehlinger is the President of Europeans for Tax Reform

The Euro, as currency for Georgia, as a symbol of its European future, will have a big enough impact to make the next EU brokered agreement stick

It is time for Georgia to take on the Euro as currency to show it wants to be an EU Member, to bypass resistance to Georgia’s EU Membership inside the EU, and to make the future of Georgia in NATO and the EU clear to all inside and outside the country. The Euro as a firm currency fundament is better economics than the constantly declining Lari.

Stuck in the Eastern Partnership – a dead-end street for Georgia
EU Council President Charles Michel visited Batumi to witness the formation of the EU Accession Trio, the official pre-EU accession alliance of Moldova, Ukraine, and Georgia, signed by the three presidents of the three Eastern European countries whose EU future is sadly rejected by the EU; three pro-European countries stuck in the failed Eastern Partnership, a parking place for European nations the EU does not know what to do with, and for whose destiny Russia feels ownership over. As the EU is not ready to grant EU Potential Candidate Status to Georgia, Georgia must adopt the Euro to bypass the deadlock.

The Euro for Georgia to back up the April 19 Agreement
Charles Michel’s presence in Batumi was too much for Russia, so the excellent 19th April agreement was canceled the following week in July, and Michel’s only success in his two years of EU Council Presidency evaporated, as he had nothing to offer for Georgia to back him up and make the deal stick, contrary to the Przino Agreement negotiated by Christian Danielsson for a similar crisis in Macedonia in 2015, where the USA and EU had NATO Membership to offer and the start of the EU Candidate Status. The USA, NATO and EU delivered for Macedonia, and Macedonia got a settlement with Greece, joined NATO in 2020, and is now an EU Candidate Country. But, for Georgia, Christian Danielsson, negotiating for Charles Michel, had nothing to offer to focus minds and make the deal stick. No NATO future. No EU future. No EU Potential Candidate Status, No CEFTA or RCC Membership. Charles Michel sent Danielsson empty handed. A bit here and there, but nothing to bind all sides and the public into a lasting consensus for Western integration backed up by real deliverables. The Euro, for Georgia, is the tool for a European consensus. Currency is what everybody uses daily, for all economic transactions; buying selling, saving and investment, and what stronger symbol, highly visible, can there be for the European future of Georgia?

NATO and EU Member Georgia – yes, but the Euro first
NATO Membership based on the BRD 1955 model would be possible, but both NATO and Georgia seem unready for the next step towards membership- NATO. Due to concerns about Russia, Georgia does not want to change its approach to reunification. EU Potential Candidacy is stuck due to similar concerns by Western EU Members. And there is no appetite in Brussels to import the next Cyprus style crisis, and no Greece around in the EU to impose Georgia on a reluctant Western Europe. Not even the Balkans’ back door via CEFTA and RCC is being offered to Georgia. So, we are stuck and Georgia is lost?

The EU could back the European consensus up with a concrete offer – the Euro for Georgia. The Georgian Lari, in relation to the USD, was 1.25 in 1996 and is now at 3.45 today. It is not a disaster record compared to Belarus, Serbia, or Ukraine, but it is far from stellar. Interest rates are sky high for SMEs and even war-torn Kosovo, which was allowed to adopt the Euro in 2002, has reached $4,200 GDP per capita, the same as reform superstar Georgia. The $16 billion GDP of Georgia won’t impress the 13 trillion Eurozone much, though.

The Euro for Georgia will make a major impact on economic and trade integration of the DCFTA. But most of all, using the Euro will make a major difference for consumers, citizens, voters and taxpayers in Georgia, making it very clear for everybody where Georgia wants to belong and where Georgia’s future lies: inside NATO and the EU, once ready for political integration, but clearly inside the European trading, currency, and value system.

Reverse engineering EU enlargement – start with currency adoption
In the theory of economic integration, integration anyhow starts with a Free Trade Agreement, and Georgia already has the DCFTA. Then add a Customs Union, as the EU has with Turkey, then the EU Internal Market, then the Currency Union and then the Political Union into which the EU is gradually developing. Georgia’s adopting the Euro is one of the logical next steps, as is joining the CEFTA and concluding an EU Georgia Customs Union similar to what the EU has with Turkey. But the Euro obviously has the bigger symbolic and visibility impact for every single economic transaction done in and with currency. Investment, buying, selling, saving and planning life and future is done in currency, and once done in the Euro, that is hard to reverse and very clear in which world Georgian wants to and will live: in the European World, the American-backed Free World, and not the Russian World. The Georgian dream – joining the West – starts with the Euro.

The Euro can be done fast and flexibly
Unlike the complicated EU accession negotiation and high-stake defense obligation of unclear borders contested by Russia, the Euro can be done quickly. At the push of a button by the National Bank of Georgia, the highly advanced digital payment system can be transferred to the Euro. Contrary to EU and NATO membership, which requires the ratification of each single 27 EU and 30 NATO Members, the unilateral adoption of the Euro needs no consent of the EU Council or the ECB- just a decision from the Georgian Parliament and Government is enough. The support of one of the central banks of the Eurozone, let’s say Estonia, will help, as will passive support to block some potential angry reaction from Brussels or Frankfurt, possibly from Poland and Slovakia, while Lithuania and Latvia will back Georgia in Brussels, as Austria and Germany helped Montenegro and Kosovo to float the Euro in 2002. A measure opposed by many but so successful for Montenegro and Kosovo, but the precedent is set, so let’s do the same for Georgia, Ukraine and Moldova, and, please, Georgia, lead Europe on that.

The Euro does not replace EU or NATO Membership, but paves the road
Sure, the Euro doesn’t replace full political membership in the EU and NATO, but it is a powerful next step, widely visible inside and outside Georgia, and nobody can misunderstand the symbolic significance. And the Euro as currency for Georgia will further intensify and deepen EU-Georgia economic integration and trade and investment links with the EU, and so will accelerate EU membership potential later in the 2020s. EU and NATO Member Georgia will seem so logical; the argument can be made so plausible. “We even have the Euro as currency, so why not join fully in the Political Union, as we are already fully aligned with EU policy and regulation in all aspects, we even have the Euro, so why not allow our politicians to sit, speak and vote in the EU Council, Commission and Parliament?”

Relaunching the 19th April Agreement into a European Pact for Georgia based on the Euro
The current escalation of the ongoing crisis will require a major new EU mediation effort – this time better coordinated with the USA. Let’s not forget that the whole crisis started on June 20, 2019, with the provocation of Sergei Gavrilov’s visit, a Communist MP of Russia, during the Interparliamentary Assembly of Orthodox Countries, visiting the Parliament of Georgia and taking the Chair the Speaker, speaking in Russian, claiming brotherhood between Georgia and Russian after having voted for Abkhazian Independence in the Russian Duma the week prior. All events since then, the jail term for the opposition leader Nika Melia, the protest against the 2020 elections, the violence and clashes leading to the 19th April EU brokered agreement, are the result of that Russian provocation and are clearly related to the Russian roll-back efforts in their former colonial empire.

The current political escalation will require a second EU mediation effort
Now, with the elections done and the jailing of the former President, clearly there is a need for another EU effort to mediate. What can the EU, backed up by the US, do to make the second effort stick, and not get blocked by a 3rd Russian intervention against it? The Euro, as currency for Georgia, will have a big enough impact on everybody, a symbol of the European future and, yes, that is hard to reverse, actually irreversible, and a big enough thing to make the next EU brokered agreement stick. So, better get ready for the next crisis in Georgia and prepare to roll out the Euro in Georgia as a tool for its peaceful unification with Europe.

Op-Ed by Gunter Fehlinger, President of Europeans for Tax Reform*

*Gunter Fehlinger is the President of Europeans for Tax Reform, ETR, an Austrian economist from Vienna, Austria, and Chair of the Austrian Committee for European Ukraine