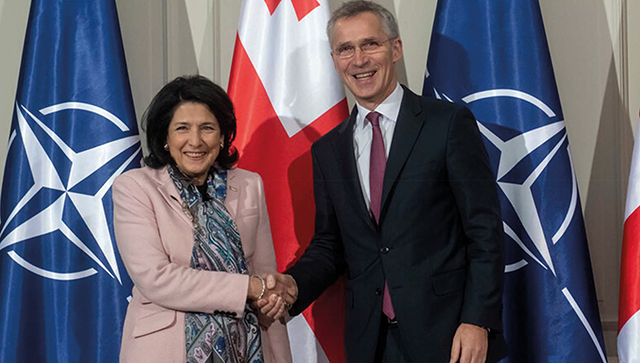 NATO Secretary General Jens Stoltenberg and the President of Georgia, Salome Zurabishvili during a meeting in March 2019. Source: NATO

NATO has been forced to take almost unprecedented action in the wake of the Russian invasion and ongoing war in Ukraine. Finland and Sweden, once rooted in a quasi-neutral position of appeasement with both Brussels and Moscow, are now firmly in the realm of the former. The trio of Moldova, Ukraine, and Georgia that still vie for membership are left wondering if it is a matter of “if” or “when.” With NATO keeping many of its cards close to its chest, it’s hard to tell what the future holds for those eagerly grasping for a seat in Brussels.

Georgia has long sought a warmer relationship with NATO. With joint training centers, combat deployments on NATO missions, and annual training exercises in Europe hosting Georgian soldiers, the relationship seems like a natural path to membership. However, the alliance has been hesitant to extend their invitation to Tbilisi. While it is expected that membership for Georgia would bring a new era of peace and stability to the South Caucasus, it could also backfire in a way both Georgia and NATO never could expect.

Georgia’s commitment to Europe is understandably commendable. While there still remains room for improvement, the nation has set itself apart from many others in the South Caucasus and other post-Soviet nations in Central Asia. This warm relationship has afforded Georgia a special place in the hearts and minds of many European leaders, particularly in NATO.

However, there may be a lesser discussed reason for keeping Georgia at arm’s length of the alliance and in its special “partner” status for the foreseeable future. As Finland and Sweden prepare for the onboarding process with NATO, the side effects of having this duo in the alliance could show what would happen if Georgia took the same path.

NATO expansion has, until recently, been fueled by a desire to become more economically integrated into the European Union markets. Since NATO membership is not solely based on military standards, the accompanying economic and legislative requirements set the bar as many in central and eastern Europe sought to anchor their economy with the West. Having the collective defense against a Russian threat was a secondary or even tertiary reason for seeking inclusion in the alliance.

After Russia’s invasion of Ukraine, massive numbers of citizens in the previously neutral states of Finland and Sweden changed their positions. As the primary reason for membership swayed back to safety from the Russians, a sense of collective defense was the top matter on the proverbial docket. Georgia, with a significant portion of its territory still under illegal occupation from the Kremlin’s forces, remained steadfast in its desire for membership.

Unlike the two Nordic nations, Georgia is in a precarious geographic position with the rest of the alliance. With only Turkey bordering the country, Georgia is significantly removed from the rest of the would be allies that could come to her defense. The simple logistics of rescuing Tbilisi in the event of a renewed invasion would present an immense obstacle, possibly too much to be surmounted in a timely manner.

Another issue is the tug-of-war in the NATO geopolitical focus. Many in the alliance have debated between a northerly and arctic focus of the alliance as others demand a southern and Mediterranean prioritization. Adding Georgia would pull more attention towards the Black Sea and the South Caucasus, and NATO is unlikely to be able to balance all three regions.

With Finland and Sweden pulling the alliance north and expanding the NATO-Russian border contact length even more, it’s unlikely Georgia would get the same amount of attention. In fact, it’s likely that the security news of Tbilisi may prove to be more of a nuisance for many of NATO’s western European members. Georgia, despite its military upgrades and reforms, still has a miniscule military force when compared to many NATO member’s armies.

The matter of eliciting the further ire of the Kremlin is another point of contention that needs to be reckoned with. Having a NATO country in the South Caucasus along Russia’s southern border and further contesting their grip on the Black Sea would likely trigger an exceptionally concerning reaction from Moscow. While another invasion similar to what has been launched against Ukraine is least likely, economic and cyberattacks against Georgia could have the ability to cripple the nation.

While NATO membership is still one of the goals for many in Parliament, it’s unlikely to become a reality in the current geopolitical climate. The alliance is clearly focused on Ukraine, Finland, and Sweden, with little patience for South Caucasus matters. As a result, the priority of having Georgia on course for membership and a designated Membership Action Plan issued is far from being discussed.

The only course for Georgia is to continue to execute the reforms in law, economics, and in the military that will help make the nation look like an even more promising candidate when that time comes. While membership comes with its own set of unique challenges and potential pitfalls, Tbilisi needs to focus on playing the part until the dynamics across the alliance and relations with Russia change for the better.