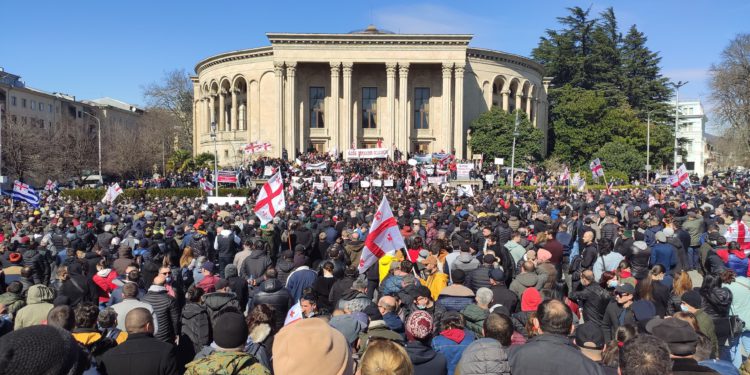 Guardians of the Rioni Valley and their supporters continue the protest against Namakhvani HPP.

The hotspot for the rallies for several days has been the village of Gumati (10 kilometers from western capital Kutaisi), but today the rally moved to Kutaisi accompanied by a convoy of cars going around the city and calling on people to join their peaceful protest.

A few minutes ago, one of the protesters arrested during the clashes at Enka’s warehouse yesterday was released from court and joined the rally. Eight others remain detained. As rally leader Varlam Goletiani noted, two representatives of the guardians will go to court to find out more about the detainees.

Guardians of the Valley demand safe passage to Namokhvani village, where they can set up a new camp zone and continue the peaceful protest against hydro power plant construction.

This is the 172th day of “guarding” the Rioni Valley. Currently, the protesters hold one tent near the police checkpoint in Gumati.

Police fortified the illegal border to Namokhvani with an iron fence today, which irritated the activists and was received as a clear message from the government that they will not back down and will continue police repression.