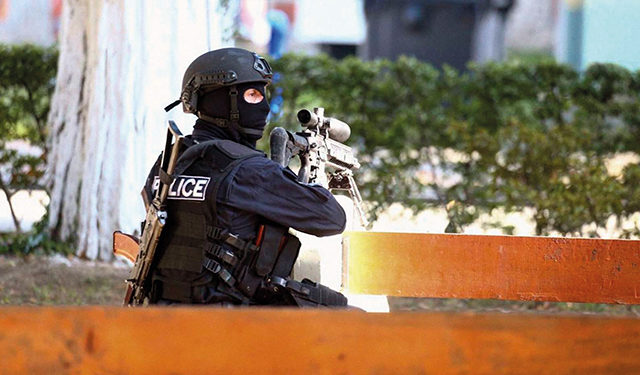 A police marksman maintains an overwatch position across the street from the Bank of Georgia building in Zugdidi. By Zurab Tsertsvadze

Over the past year, Georgia has seen a rise in the frequency and intensity of high profile criminal incidents, particularly with regard to banks. To many, the idea of a bank robbery is something of a relic of the past, perhaps even of the old American West or the spate of bank robberies in the latter half of the 20th century in Europe. The idea that one person, or even a small team, could infiltrate a financial institution and extract an exorbitant amount of cash is typically relegated to the plots of films and novels.

However, Georgia has witnessed these attempts in full display, leaving police on the defensive.

The Georgian police, under the purview of the Ministry of Internal Affairs, have gone through several reformations in recent decades. They have come leaps and bounds from their Soviet predecessors, and, with training from their European and American counterparts, have become a unit of dignity compared to their beginnings. Despite this, there still remain many who resist the advancement of European Union (EU) and American standards in law enforcement, justice, and the laws regarding interaction with both the accused and the innocent.

In their evolution, the Georgian police force has developed a system of standards that mirror that of their Western compatriots. Due process, professionalism, and tactical prowess have become watchwords of the new breed of officers. However, despite this revolution in policing, many have found that the force in Georgia leaves much to be desired.

Some have stated abuses of power, unwarranted physical assault, and wrongful imprisonment. One interviewed individual stated that he was imprisoned without trial and without a formal statement of the charges for which he was being arrested, not only once, but on multiple occasions. In one occurrence, the individual was beaten without reason for five hours, including strikes to the groin and spitting. In one incident, the individual was pressured to receive an injection of an unknown substance, only to be defended by other inmates. With no translating services offered, he was placed under arrest and relegated to the confines of a cell for three months. In summation, the individual stated he has “no faith in anything here.”

In another incident, another individual explained that they were arrested during the process of reporting that a crime had been exacted upon themselves. In addition to scant details about the detainment, the same sub-par inmate services, accommodation, and sustainment standards were present. The absence of legally adequate translation services was evident, according to the individual, as well as protection from other volatile inmates. Paired with a seemingly disinterested attitude from their embassy, the individual was left not only convinced that Georgia had failed them, but with a clear venomous distaste for the nation.

Unfortunately, these examples are far from being just the tip of the proverbial iceberg when it comes to reports of similar activities in Georgia.

With all of this testimony, it is difficult for one to see the proverbial light at the end of the reformation tunnel. Recent issues between members of the press and their inherent right to protection from unlawful and aggressive acts have further highlighted some of the issues in the nation. However, the multitude of bank crimes have greatly raised the police response issue to yet another platform.

Within the past year, bank branches have been targeted by armed assailants taking hostages and demanding exorbitant amounts of money for their safe release. While the reasons for this string of violent crimes is yet to be clarified, it is the police failing to effectively deter the criminals that deserves more attention. Justice and community safety are the foundations of a modern society.

Like any national police office, Georgia has an approximately battalion-size unit of quick response officers able to respond to complex situations. These officers, with tactical uniforms and weaponry fit for a military force, are tasked with handling the most delicate of circumstances. Unfortunately, they have not been able to dissuade the more hardened criminals from attempting their grandiose schemes.

In Zugdidi, despite negotiating the release of all but three hostages, they allowed the man to walk off with $500,000. While it was certainly a highly tense and complex situation, early strike opportunities and interdiction tactics were allowed to slip away. At the time of writing, the man identified as Badri Esebua has yet to be apprehended.

In Digomi, Tbilisi, another bank heist saw robbers make off with a yet to be determined amount of money. Earlier this year, there was another bank incident near Avlabari Station in Tbilisi, though law enforcement was able to secure the individual in this instance. And this is not a comprehensive list of bank-related incidents that have happened in past months. It is, however, a shock to the fabric of not only Georgian society but also the law enforcement community.

The Ministry of Internal Affairs undoubtedly does not want to see these types of events persist, not only for its reputation’s sake, but also as it is in their specific charge to prevent them. The natural heavy-handed response at the street level has yet to provide any results, and as such, perhaps a more nuanced strategy may be needed for the nation’s police force. For the rapid reaction teams, tactical exploitation of opportunities and a more proactive or even aggressive response to these armed and barricaded individuals should be explored.

A key part of the total security picture, which is to say the sovereignty, of Georgia is the establishment of law, order, justice, and peace. If this is compromised, the pillars that thousands worked and others died for to ensure that Georgia, a nation thousands of years old, would last many thousands more would be sacrificed for a momentary hour of security. The broader picture is that Georgia’s future lies with the West, the part of the world responsible for the advancement of modern society. For Georgia to be a part of this, it must shed the old scales of the past that only scar that advancement.

Author’s Note: The Ministry of Internal Affairs did not respond to requests for comments or interviews for this article. 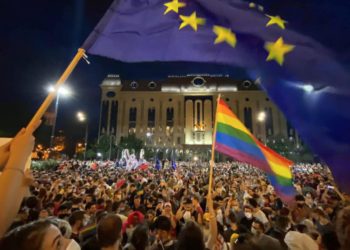 Will we be Asked One Day: Church or NATO?

Nika Melia: We’ll Continue to Fight until Saakashvili is Released