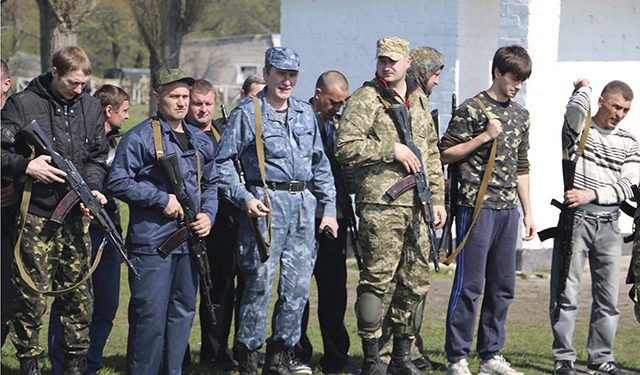 A Ukrainian territorial defense battalion, made up of civilian volunteers, trains at a base outside the city of Dnipro in 2015. Source: Nolan Peterson/Coffee or Die Magazine

As national defense strategies typically go, the unquestioned norm is a standing armed forces organization. This vast force is usually backed with various reserve and national guard or militia units behind it as a type of force multiplier for worst-case scenarios. Depending on the law and constitution of the country in question, the police can also be called into service in certain circumstances. The common citizenry are rarely if ever expected to bear the burden of armed conflict, but rather are protected at every opportunity.

However, with some states being placed under threat from other far larger powers, many commanders have begun to look beyond the pale of conventional warfare. Ukraine, Lithuania, Latvia, Poland, and Estonia have all begun turning to the potential of resistance-based warfare rather than outright battlefield victory as a means to maintain their sovereignty. Resistance takes many forms in the sphere of military strategy, particularly dependent on the observer’s background and training.

Historically, the more famous examples hail from the Second World War and such elements as the French Resistance, the Forest Brothers of the Baltic States, and the various “Partizan” groups that fought across Eastern Europe and Russia. In more recent conflicts, these include a wide range of units from the Mujahideen in Afghanistan in the 1980s to the Ukrainian civilian and foreign volunteer irregular units struggling against the Russian invasion of 2014.

What virtually all of these units throughout the 20th and 21st centuries share in common is several key attributes that have come to define a resistance unit in strategic terms. They are composed of local and native peoples that conduct active and passive, violent and nonviolent, military, political, social, and economic warfare against an occupying aggressor. In terms of Georgia, this will be the next Russian invasion and occupation force.

While the necessity of a standing regular army will never go away, the need for an irregular force of civilian volunteers is a newer necessity. This requirement is one that Ukraine found to be vital to its own national defense throughout the Russian invasion. This ad hoc “national guard” force was even evaluated by some analysts and experts to be the saving grace for the nation when Russian regulars entered the battlefield in the summer of 2014. For Georgia, the same type of force will have to be called upon.

While the composition and organization of this force has already been covered in recent articles (see Citizen-Soldiers: Should Georgia Revive the Home Guard Model?), it is their formalization and implementation in a practical exercise and interoperability with NATO counterparts prior to, during, and after an invasion that need focus.

Not unlike their regular army counterparts, resistance forces will require significant operational literacy with NATO forces, particularly their Special Operations Forces (SOF) components. These components are tasked with the training, advising, assistance, and enabler missions that amplify the effectiveness of resistance units. Having these relationships between resistance leadership and SOF teams is essential to cultivating a healthy opposition to a Russian occupation. As the saying goes, an ounce of (pre-planned training) prevention is worth a pound of (diplomatic and military) cure.

Ukraine, despite already being locked in a luke-warm conflict with Russia, is already implementing this strategy within its citizenry. A cursory search on sites such as YouTube will reveal numerous video reports of local defense and resistance units, termed Territorial Defense Forces, These men and women hail from all walks of life and have agreed to be a part of the underground movement to resist and combat what they see as the coming Russian occupation.

With instructors from NATO as well as their own combat veteran volunteers from the Donbass front, their education goes beyond standard military training. As they are not expected to carry out offensive military operations, their courses focus on improvised forms of defense, asymmetrical warfare, and guerilla tactics.

The primary objective is simple, but drawn out over the long term, as the defenders are quite literally fighting in their home field. Each Territorial Defense volunteer aims to make the political and military positions of the enemy so untenable, so undesirable, and so utterly miserable, that they are forced to withdraw. As one might say, a thousand small cuts brings down even the mightiest of beasts.

Involving allied SOF units in the resistance preparation movement is an essential ingredient not only in the command and control capability of the resistance units, but also in the intelligence, surveillance, and reconnaissance for other NATO elements. This relationship was visible between the NATO SOF units and the Northern Alliance at the very early stages of the Afghanistan operation. Through this close cooperation, they had access to local ISR assets that would otherwise be outside the reach of conventional units.

Unfortunately, this level of cohesion is difficult to attain outside of a national emergency. It’s unrealistic to have NATO SOF units working with civilian militias during times of relative peace. However, maintaining warm diplomatic relationships can go a long way. Types of asymmetric operations like these aforementioned examples should be firmly integrated into the national defense grand strategy. Georgia, like other smaller nations, is in a position that requires this approach to national security; resistance and underground opposition as a form of long term preservation of sovereignty.