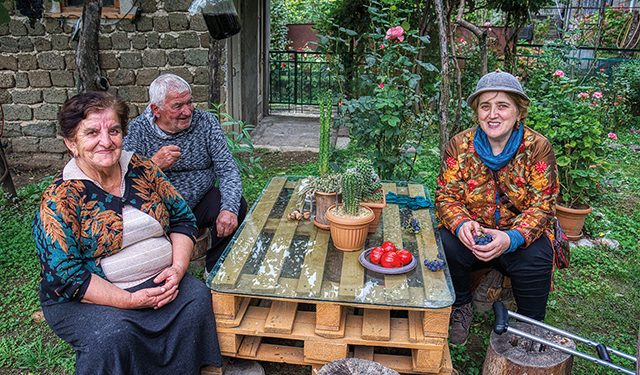 We went because we both had to and could. My wife is now no longer teaching English at Etseri School, which is the “could”. The “had to” was the funeral for a Georgian friend of ours, murdered before his 60th birthday (apparently by a fellow countryman) overseas.

The funeral was first. Tragedy multiplied by the dead man being his parents’ only son, them still being alive, and him not having any children (neither does his unmarried sister). Many questions still unanswered; shock still raw. Witnesses in the hands of police in their country of work but refusing to name the likely suspect, who is still at large. Misplaced sense of honor making them accessories. We hope for answers, pray for peace for the family.

We traveled on from there to Oni, capital of Racha province, where my wife has relatives, and stayed with them for two nights. In between, they sent us off on an excursion with a man who twice weekly delivers bread to two sets of Georgian border guards, up where Racha meets North Ossetia. (Apparently they haven’t thought of getting freezers to keep a supply for their 10-day tours of duty. Their loss, our gain.)

The weather was not looking promising, mostly cloudy with rain threatening, but of course I had my camera gear with me. Our driver was very accommodating with my requests for photo stops in the oncoming autumn landscape. Racha’s wonderfully asphalted roads soon gave in to 4×4-worthy gravel and ruts, but we were expecting this, ready for it. 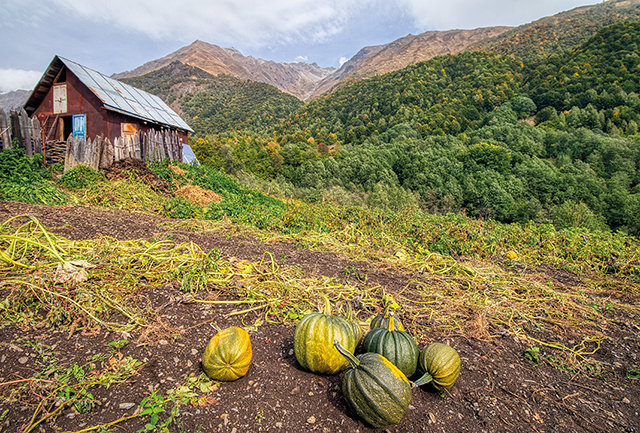 On the way, we crossed some shallow river intersections with the road, and I took the opportunity to describe to my wife the origin of the word “ford”.

The best shots came at our first bread stop. There were a few meters in which I could roam, and 180 degrees or so of allowed coverage, not walking towards or aiming at the Russian border. But all the action was south anyway; and the sky most obligingly gave me gorgeous side-lighting just when I needed it, for a few minutes of magnificent warm-hued forests topped by newly-snowed peaks. Then it went flat again, but I had been ready to shoot, and was thrilled.

On to our next delivery, this one in the nearly abandoned village of Gona, which doesn’t even have cellphone coverage. This border used to be so well used that the village had all sorts of shops, even one for gold jewelry; now only ruins remain for archeologists to speculate over. We stopped here for lunch in a local lady’s yard, buying a bottle of her honey and sharing our k’ubdari (Svan meat pies) in exchange for sour cream mixed with curds. Here, the backdrop was a long mountain with glaciers which reminded me very much of the top of Ushguli, over which Mt Shkhara, Georgia’s tallest, looms. 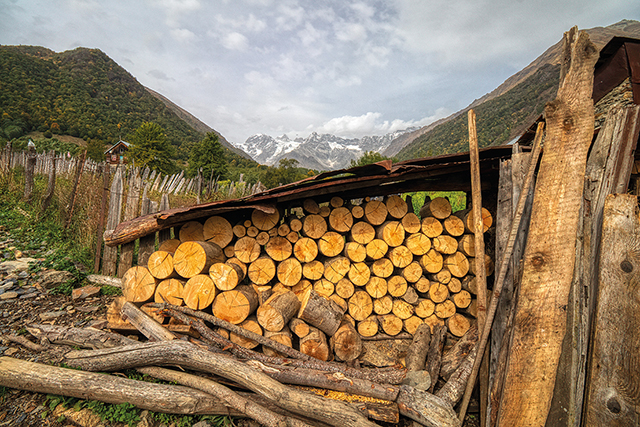 Back down again, noting a couple more nicely named villages on route: Itsa and Sori. String it together and you have: Sori, Itsa Gona… now we just need another Georgian place name which is a verb in English. What can you find on Google Maps, readers? I’ve come up empty-handed.

We ended up in Ozurgeti, capital town of Guria province, for another reunion, this time with a friend who’s been working outside Georgia for nearly five years to clear family debts, a sadly familiar Georgian story. She’s back for a month, having been sorely missed by husband and three sons, now all adults. I picked chestnuts for the first time ever, under a decades-old tree, glad that the spiky outer shells disgorge them before they fall to the ground.

Rather a whirlwind tour, but again, only possible because of shedding the teaching job as we prepare to migrate south-east to Tbilisi for our first ever winter away from Svaneti since moving to our big house 12 years ago. We will enjoy this newfound freedom and take full advantage of it, with more roaming and reportage to come.