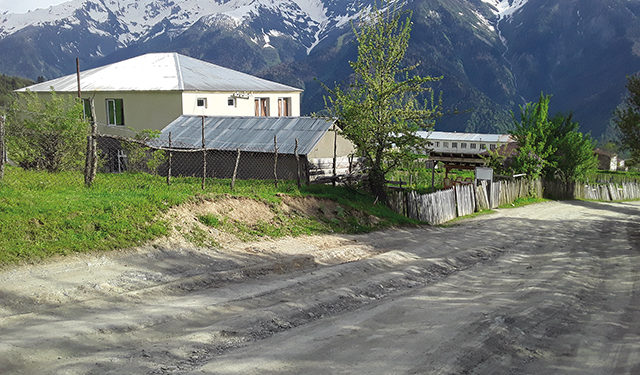 A couple of forewords before I start this week’s main article. One: A neighbor of one of the graduating Latali pupils I wrote about last week called me a day after I had finished editing the 768 photos of their two-day celebrations. At great speed, and with considerable anger (and not a word about the quantity or quality of my images), she let me know that, because I had hitched a ride for the roughly 20 km round trip from Mestia to their final destination (a trip not included in my own petrol calculation), I wasn’t entitled to the remaining 30 GEL of my 60 GEL petrol fee. Having been interrupted by her several times, and being unable to make any headway, I handed the phone to my wife, who got little further despite both of them being native Georgian speakers. Disgusted and furious, all I want now is an apology from someone.

The other thing is that I intended to write this week about the renaming of our Etseri Public School after one of four young men who died on the same day in the war with Abkhazia a couple of decades ago. But that event has been so full of invitations not given or given too late, and numerous other spurnings and intrigues, that I throw up my hands.

Instead, I turn to the long-awaited and now starting renovation of the roughly 2 km road which goes up past our house from the main Zugdidi-Mestia highway. Little rebar posts with red and white ribbons attached (either Georgian or Canadian colors) have begun appearing on the road, which currently resembles nothing as much as a former river bed. The surveyors came; now the workers are paying a local family some 700 GEL/month to host them as they begin. They are digging trenches for water to run along the road, first. I’m not sure of we will get only cement or tarmac as well, but the excitement is considerable. 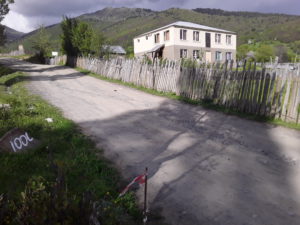 The thing is, as I am taking pains to say to the mayor and others, my wife and I saw a new tarmac road being laid in Ambrolauri, Racha, on our Covid-induced Georgian travels last fall. It was not yet finished… and, even to my untrained eye, was already heartbreakingly badly done, before erosion or other natural factors could begin spoiling it. The 10 km road from the main Racha highway to my wife’s ancestral village of Mravaldzali had also been done in tarmac the year before. And it was also in such bad shape that I, a non-local, was incensed on behalf of those who must travel it regularly. Into whose pockets has the extra money gone, leaving a shoddy, shame-inducing mess behind? Who is standing over them, protecting them from prosecution?

We must do our best to ensure that the same thing is not repeated here. Our workers don’t live in this province; they are from far away, and don’t have to live with or travel on the results of their handiwork once it’s finished. I hope to get to know them a bit, and get their names and company details, and try to get word out in the village that we CAN say and do something to see a good job done. Really, how can any worker do such a poor job and then get any pride for their labor? Do they push down the voice of conscience until it is completely stifled, and go home glad to be getting a salary for their families anyway? I don’t know. A good worker is worth their weight in gold; a bad one, I only want to advertise AGAINST.
So, my mood at the moment is optimistic, forewarned, and cautious. I hope for the best, but recognize that I may have to work, and encourage others to work, to see it happen. I just hope we won’t let ourselves be deceived by what is being done right under our noses and running past our doors. The next few months will say.