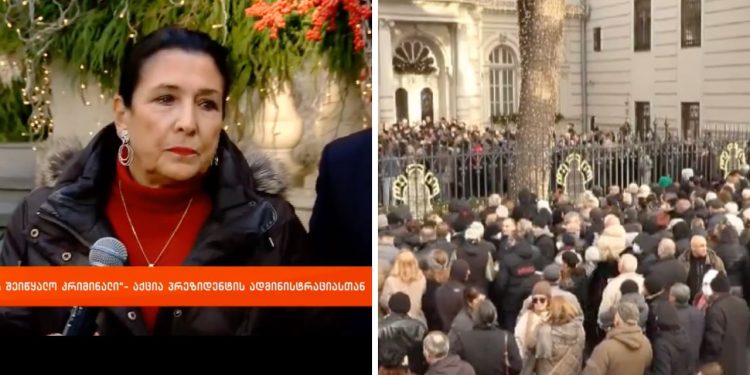 The participants of the rally wanted to remind President Zourabichvili of Saakashvili’s crimes.

Buta Robakidze’s mother, Ia Metreveli, Sulkhan Molashvili’s brother, Tornike Molashvili, and others are among the attendance of the rally.

At the same time, President Zurabishvili came out to the courtyard of the residence and addressed the demonstrators:

“I am very curious, first I have questions – you rushed here because of the rumors spread by some people, I wonder where those people who are spreading the rumors about me were in 2007, where were they when the tragedies of Misha’s time had already happened? Where were they when I was standing in the street? I will tell you where they were – either they were in Misha’s headquarters, or they were well placed in various positions, or they were well placed in “Cartu Bank.” It turns out they know what, when, and why I will do it.

Did I pardng Murusidze, Chinchaladze? Did I appoint them to places where no one can remove them? Isn’t that a pardon? Where are you? When did you protest? Where have you been?” stated Zurabishvili.