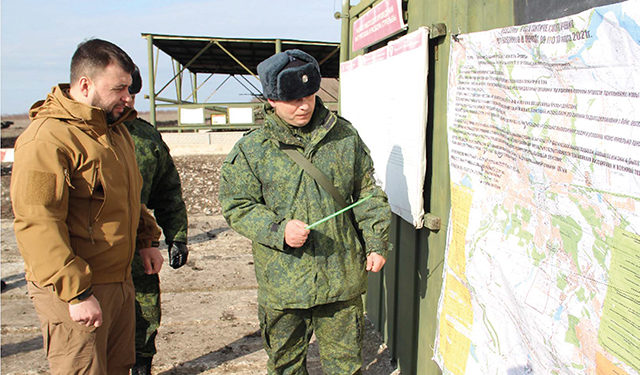 As a significant portion of the Russian invasion force in Ukraine refits, resupplies, and repositions to the east, the momentum in the occupied areas will begin to pick up. Unlike the rapid advances from the south and initially towards Kyiv, little progress has been made by the puppet-government’s forces in the Luhansk and Donetsk so-called “people’s republics.” Just as they did in 2014, Russia has already been seen replacing the leadership in some of the smaller captured municipalities. As more ground is taken, will Russia continue to create more of these micro-protectorates?

To understand this model of territorial gain, an examination of the initial 2014 invasion is necessary. Russian-backed militias, augmented with Russian forces, managed to seize control of the Luhansk and Donetsk centers. Little time was wasted in installing a loose governance structure. However, some of the individuals put in positions of power had little to no political or business background.

In one instance, the “people’s governor” for the Donetsk region had the previous employment of a “Santa-for-hire.” As reported by the BBC at the time of the invasion, they said, “Before developing a reputation as a militant secessionist, Pavel Gubarev cut more of a granddad figure, posing as Grandfather Frost – the Russian version of Father Christmas.” Gubarev was arrested during the early conflict but released as a part of a prisoner exchange.

Another instance highlights this model further. Valery Bolotov, the first head of the Lugansk “People’s Republic,” was plucked from obscurity as a private driver in the region. With little military experience outside mandatory Soviet service, even his own associates had to admit his weaknesses. A Russian source commented at the time of his death in 2017, saying that Bolotov “surfaced out of nowhere and had a reputation as a good military commander, but a weak politician.”

These false starts with Russia’s attempt to legitimize its holdings led to something of a regime of terror in the occupied cities. Multiple weak and hastily promoted leadership were purged, being either arrested, disappearing, or dying in curious circumstances. At the same time, with the use of brutal local security forces and their repression techniques, any popular opposition was removed. Coupled with intense and hyper-focused propaganda campaigns via all media channels, Moscow sealed any cracks left behind.
The Kremlin knew that any minor fracture in the social and political terrain of this territory would spell death for their future ambitions. As a result, leadership could only be chosen based on their allegiance to Russia rather than on any actual management or leadership credentials. This led to the notorious corruption, breakdown in infrastructure, and hostile environment seen in Russia and any Russian-controlled territory. The Kremlin, in typical fashion, funneled incredible amounts of funding to smooth over the issues altogether.

Now, in the newest territory that Russia has managed to seize, the early symptoms of this same formula are beginning to be seen. Reports from Ukrainian military, prosecutorial, and individual private citizen sources have documented these actions. Russian forces, and more often their follow-on troops in the Ministry of Internal Affairs or Intelligence services, are already in motion.

Several mayors of small towns and significant villages have been abducted or detained under house arrest. Poignant examples of this are seen in the Kherson and Zaporozhye regions of Ukraine, as it has some of the most significant Russian gains. As was seen in Donetsk and Luhansk, abductions, violence against civilians, and replacements of the local government bodies have been recorded.

In the city of Melitopol, the mayor was seen being led out of the city administration building by Russian soldiers. For several days he was held captive before being released in a prisoner exchange arranged by the Ukrainian government. During his captivity, new members of an “interim government” announced they would be installing a so-called “committee of people’s deputies” to govern the city. Peaceful pro-Ukrainian demonstrations were dispersed with gunshots and hand grenades.

The major cities are not the only places seeing these effects. The citizens of the small town of Genichesk, north east of the Crimean Peninsula, saw their mayor removed by force. Russian forces announced that Mayor Alexander Tulupov had resigned, however, many noted that this was not a voluntary decision on his part. Beryslav, Hola Prystan, Dniprorudne, and so many other small townships have seen the same treatment, as well as abductions of any local citizens that display opposition to the new Russian leadership or military presence.

However, it is unclear if the Russian forces can maintain their long term presence. Unlike the seizure of Crimea, Donetsk, and Luhansk, the recently captured regions are more unstable. The former regions held more ethnically Russian peoples, with less propensity for resistance or facilitation for anti-Russian support.

Kherson and Zaporozhye regions harbor far more pro-Ukrainian, and even some vehement anti-Russian, sentiment. This can manifest itself in two crucial ways. They can become an active insurgency against the occupation force, or as an enabling and supporting force for Ukrainian special operations to work in the area.

The logistical, economic, and administrative burden of employing the military repression and defensive structures of these areas will be exceptionally onerous. In addition, the immense project of holding some type of rigged referendum in the captured territories, as they did after 2014, would be gargantuan. These steps would be required if Moscow has any intention of truly holding these lands, as it has outlined in its Novorossiya plan.

With their forces already stretched thin, it’s unlikely this would be completed in any timely manner. Ukrainian forces would be offered ample time to destabilize Russian positions and undermine any attempt to plant their proverbial flag on their soil over the long term. European and NATO allies should support this effort through counter-information warfare and underground channels of support for both unarmed and armed resistance organizations in the occupied territories.

The lessons from 2008 in Georgia should be carefully heeded. Allowing Russia to build the necessary infrastructure for long-term occupation has to be countered before they start. Both economic sanctions as well as military support should be angled at making the establishment and support of these areas unsustainable. Russia will most likely attempt to cement their gains through these tried and tested avenues. It is the job of not only Ukraine but NATO, Georgia included, to counter this threat to global stability.