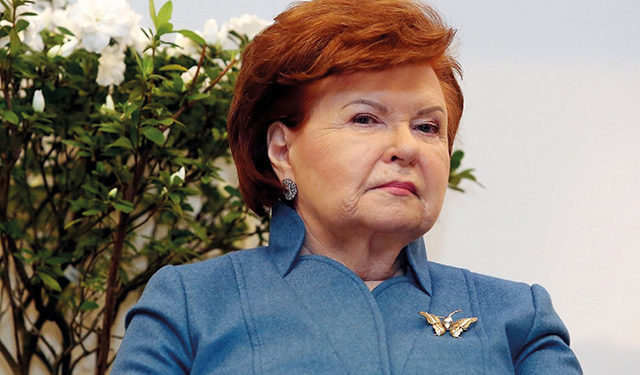 “The demands that President Putin has put on Ukraine, both before the war and now, are totally outrageous. They sound insane, frankly. He wants to destroy everything that has been achieved since 1997. Well, sorry, I’m one of those who spent eight years of my life as president working extremely hard for that, it was our conviction and our choice. So Mr. Putin has no say on it. His pretensions to rule the world, to be the Tsar of the whole European continent are a total madman’s dream” – Told former Latvian President Vaira Vike-Freiberga to Georgia Today. Freiberga holds the historic distinction of being the leader under whom Latvia became a member country of both NATO and the European Union. Our senior correspondent Vazha Tavberidze spoke to her at the Baltic Defense College’s ‘Conference on Russia’ that took place in Tartu, Estonia on March 3-4.
Could what is happening now in Ukraine have been avoided?
Well, again, remember how he claims it could have been avoided. I mean listen to the words coming from his own mouth. The Ukrainians should accept that they are not a nation, that they do not have a language, that they don’t have a history, that they do not have a right to national independence, that the governments that they have chosen and elected are illegitimate, that they are Nazis, that they commit genocide against the Russian speakers and all sorts of insanities. They cannot accept that. These are outrageous and unfounded demands that he is making on them. So, if that’s what it takes to prevent it, then no, it was impossible to prevent. I think he wanted to start a war to demonstrate a show of force and to scare the whole world in order to impose his demands. People have been trying to accommodate Russia, to pacify Russia, not to anger Russia. When we were a candidate country, I often heard the phrase: Russia is not going to be happy if the Baltic countries become members of NATO. President Chirac of France told me – “you should not be playing with the mustache of the bear, you shouldn’t annoy him.” – I said, no, Mr. President, but we do not want to be eaten by the bear either. That is the point.
Putin sees himself as a Tsar of all of Russia and Russians. That is quite a broad domain. When he took South Ossetia and came within 49 kilometers of Tbilisi, the world said, oh, well, it’s too bad, but what can we do? That’s the way it is. Too bad for the Georgians. Then in 2014, he went further, and actually annexed a part of the country. He also denied that Russia was in Eastern Ukraine to start with. It’s sort of an Alice in Wonderland, the world he lives in. Everything he tells his people or the world is a warped image of reality. I remember President Poroshenko, at the Munich security conference, showing a slew of Russian soldiers passports that had been obtained from the prisoners that they had taken. They had Russian passports, these little green men without insignia, but Putin will deny to his dying day and say no, no, they were not Russians. They are Russian. Television tells Russia’s inhabitants that no, they are not shelling Ukraine, that these are lies by foreign newspapers.

What should the West’s response be and what are their limits?
We have heard from Prime Minister Johnson and from President Biden on numerous occasions that we do not wish to have a third world war with nuclear weapons, but at the same time agree that Putin is threatening the world. I think that the borders of the NATO Alliance are absolute red lines that Mr. Putin must not cross. He thinks that by dangling his nuclear weapons in front of us, he is going to impose his completely unjustified and unreasonable will on the rest of the world. We cannot go on accepting that. I think people are beginning to realize that his demands are unreasonable and are to appease Russia. This has been the song and dance that we’ve been hearing ever since our renewed independence – appeasing Russia, not making them angry, not annoying the bear. Western powers were not willing to give a Membership Action Plan to Georgia, nor to Ukraine at the 2008 NATO Summit. As soon as they did that, Georgia was invaded. They should have given the Membership Action Plan and let both countries proceed with the necessary reforms and to declare and accept their readiness. But they were weak. They did not want to annoy the bear. Russia took this as a sign. Our hands are free, they’re not going to oppose us. I think that the West has to draw a line in the sand and show them where the limits are. So far the borders of the NATO Alliance are definitely the limit.

No limits outside NATO borders then? Let’s take the worst case scenario – what happens if Putin decides to use nuclear strikes on Ukraine?
Then Western powers will have some very serious thinking to do. Frankly, I would not advise Mr. Putin to test the resolve of the West or to push them too far. They of course do have a responsibility towards their citizens. Using nuclear weapons is considered a taboo – then again, attacking a country without reason is also a taboo, but he has done it.

How satisfied are you with the sanctions that we have seen so far?
They’re much better than before. This time, a decision was made very quickly. An agreement was reached and the results were felt amazingly quickly because the next day the ruble tumbled down and, if the ruble tumbles down in value, every citizen of the Russian Federation, no matter what kind of propaganda you feed them, is going to go to bed hungry. They’ll be told that it’s the fault of the West, but they need to start wondering about the decisions that their own leaders have actually been making. Some of them will probably continue thinking that they’ve been wronged and nobody loves them, because they’re so wonderful and better than anybody else. But there will also be people who start wondering, what on earth is this? Is this the direction we’re being given by our leaders?
This is why more sanctions should be added.

On Russia & Ukraine negotiations- when facing an existential threat, what is acceptable for Ukraine to negotiate on?
That’s a good question. I think that what they are hoping for is that at some point a ceasefire, at least, could be agreed on, as the humanitarian crisis is getting bigger by the day. If a ceasefire could somehow be agreed, that would be the first step. Then one could start thinking about how Putin can withdraw without losing face, and how Ukraine can accept some potential conditions, for instance, neutrality for the next 20 years. They could potentially offer that sort of thing, but I doubt Mr. Putin would settle for that. Austria, Finland, Switzerland, Sweden and Ireland wish to remain neutral but then again, if my country’s example is anything to go by, Latvia tried to be neutral. Before the Second World War, it didn’t do it any good. We were occupied first by the Soviets, then by the Nazis, and then annexed by the Soviets and stayed that way for 50 years against our will, and against international law. So in our case, having a collective defense alliance was crucial for us, extremely important for our sense of security.
That is where the West should come in: priority number one is a ceasefire. The second priority would be to get the Russian army out of Ukraine. That’s what should happen. Ceasefire first, withdrawal of troops later. I’m sure that NATO, who Mr. Putin claims to be threatening Russia, can give him written assurances that they do have no plans whatsoever of attacking him. Latvia, with our huge army and our massive population, can promise the Russian Federation that we are not about to attack them. So if he is so scared, and if Mr. Lavrov is shaking in his boots, I am sure that written assurances can be given that there is no intent to attack Russia on anybody’s part.

When some sort of agreement is reached, will the doors of Western capitals still be open for Mr. Putin for a lovely chat with European leaders?
I think that Mr. Putin has lost more than he counted on with this adventure; his prestige is forever damaged. He has been labeled as a war criminal, as somebody committing crimes against humanity. As such, he will have difficulty reintegrating with what is called polite international society, he will have very, very few friends left outside of his own country, Belarus and, possibly, Venezuela.