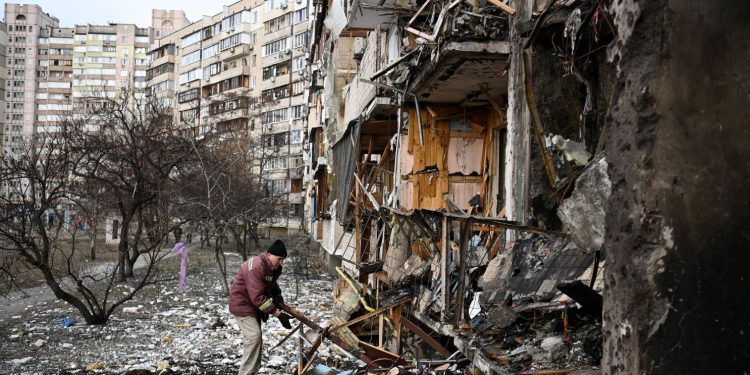 After missiles hit at least 10 Ukrainian cities, President Vladimir V. Putin warned in a televised address that “no-one should have any doubt” that Russia will defend itself.

President Vladimir V. Putin of Russia ordered a far-reaching series of missile strikes against cities across Ukraine on Monday morning, hitting the heart of the capital and other areas far from the front line in the broadest aerial assault against civilians and critical infrastructure since the early days of Moscow’s invasion.

Russia’s attacks killed at least 11 people nationwide and wounded 64 others, the Ukrainian State Emergency Service said, and knocked out power and other key services in multiple cities. Mr. Putin said the strikes were in response to a blast that hit a key Russian bridge over the weekend, which he called a “terrorist attack.” He threatened further strikes if Ukraine continued to hit Russian targets.

The barrage of strikes — from Lviv in the west to Mykolaiv in the south and Kharkiv in the northeast — slammed into civilian areas and apparently also sought to cripple energy facilities as winter approaches. The explosions blew out the windows of buildings in central Kyiv, set vehicles ablaze and sent residents scrambling for shelter at a time when many were heading for school or work.

The attacks demonstrated that Russia still has the ability to strike deep into Ukraine and terrorize civilians, even as Moscow’s forces struggle on the battlefield in the eighth month of their invasion. Ukrainian troops have reclaimed more than 1,200 miles of territory in the east and south in recent weeks, and Mr. Putin has faced mounting criticism of his army’s performance and growing opposition to his call-up of hundreds of thousands of civilians into military service.