Pulling the Yarn: Popular Discontent & the Future of Georgia 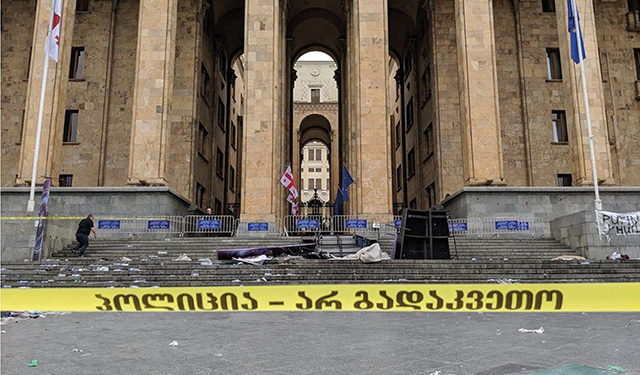 While a moderate discontent with government is healthy, keeping authorities on their proverbial toes, it is the rapid growth and widespread displeasure with their activities that amounts to a forcible change in leadership. Only those who have absconded to the hills or abided to exist under rocks have been aloof of the growing socio-political tension in the nation. Now, with questionable electoral practices, poor economic management, and now accusations of imprisonment of political opponents, some have begun questioning the future of Georgia.

For months now, groups of people have been seen outside government offices voicing their concerns. Thankfully, thus far, there have been only small and isolated incidents of violence with none of them resulting in any serious injury or death. However, it is well within reasonable extrapolation that something has to be done between the two polarized sides before things become too far gone.

The October elections in 2020 were the epicenter of much of the turmoil, with supporters of the opposition claiming that bribes and fraudulent voting took place. As people took to the streets to make their voices heard, the response by law enforcement was met with heavy criticism. Sporadic violent incidents took place, with things coming to a head with the resignation of several key members of the political leadership, most notably Prime Minister Giorgi Gakharia. The ultimate capstone has so far been the raid on the political offices of the opposition party by special police teams, and the arrest of key opposition leader Nika Melia.

This raid is what has brought Georgia front and center in the international stage, with international voices from Europe, the US, and the UK drawing a line. The attack on the United National Movement headquarters was also the first executive action taken by the new Prime Minister, Irakli Garibashvili. His cohorts within the Georgian Dream party, the dominant party in power now, all lauded the attack as the government’s finest hour and an “execution of law.”

Ongoing rallies and protests have plagued the government ever since, with letters and missives coming in from embassies and international partner organizations. Largely centered around an opening of dialogue and a deescalation of force against political opponents, the people however have begun to liken this to the return of the Soviet Union and its brand of political repression. Slogans going out such as “Georgia will not return to the USSR” and others have begun emblazoning signs and banners outside parliament, even becoming a filter on Facebook.

However, all of this does show signs of a regressive movement into an oligarchy and a stagnation of general social progress. Already, there are meetings and discussions in the halls of the European Union about how this could affect their relationship with the Georgians, as well as any hope for near-future integration. In addition, NATO officials are concerned as the movement shows signs of halting, even if only temporarily. This change is also measured numerically, as Georgia’s Freedom House score fell a point in 2021, from 61 to 60. For reference, in 2017 Georgia’s score was 64.

Cumulatively, much of the socio-political activity could easily be dismissed as a temporary disruption brought about by a group of hotheads in key places, and that cooler heads will prevail and relative peace will be restored naturally. However, this ignores many of the peripheral factors such as economic fatigue from 2020, Russia, and the recent release of an interesting conversation between the new Prime Minister and the son of a particularly controversial individual.

First, the recently released audio tapes seem to back a growing narrative that many in the ruling party have been pressuring those who speak out against them and their members. The instance cited on the tapes alleges that Bera Ivanishvili, son of Bidzina Ivanishvili, and Prime Minister Irakli Garibashvili discussed a plan to intimidate a minor who had posted disparaging remarks about Bera on social media. Bera admits that these comments were made, albeit in 2011 when he was also a minor, but stands by his stance and insists that those who speak against him or his family should be punished.

Russia also has a quiet interest in the growing discontent, as the destabilization of Georgia only furthers their control of the South Caucasus and Black Sea regions. Their increase in deployments to Armenia and in Nagorno-Karabakh have strengthened the total tactical presence in the region. A weakened Georgian state would allow for further influence to be asserted and a gradual dismissal of The West’s grip. What’s more is that the normalization campaign, the Kremlin has been waging against Georgia to solidify their hold in Abkhazia and South Ossetia would finally be complete.

Finally, the economic fatigue the country has been in since the closure of so much commerce and industry in the nation has put much of the social, political, and security infrastructures in a precarious position. All that is needed is the proverbial straw to break the Georgian camel’s back and begin a sequence of dangerous events moving in a very fast downward angle.

Georgia, as it has been for thousands of years, is still key territory politically, socially, economically, militarily, and culturally. The defense of the nation rests with the people and those in office that still value a democratic state and the freedoms it affords. However, this must all come at a cost. The American politician and a man who is widely revered as the father of modern political freedom movements Thomas Jefferson once said, “The tree of liberty must be refreshed from time to time with the blood of patriots and tyrants. It is its natural manure.” In Georgia, this “blood” is the social and legal pressure to keep straight the aim of the state towards democracy and a free and open society.