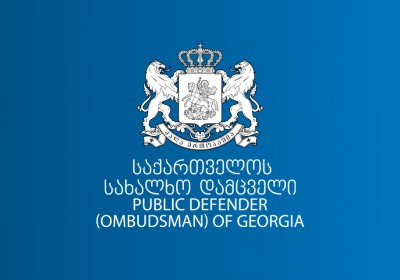 As is known to the public, on December 14, 2022, the Special Penitentiary Service released footage showing prisoner Mikheil Saakashvili in a ward of a medical facility. According to the Service, the footage was made public due to high public interest and shows the condition of prisoner Mikheil Saakashvili in different periods. The agency also pointed out that the footage showed Mikheil Saakashvili’s simulated actions, the purpose of which was to hinder the administration of justice and to mislead the public and international partners,” reads the statement published by Public Defende.

Public Defender’s Office considers that the legitimate purpose of the release of the footage, including the satisfaction of the high public interest, or the proportionality or adequacy of that decision, cannot be proved, adding even when there is a legitimate purpose, it is important to strike a balance between the public interest and a person’s privacy, personal data protection rights, when disclosing health information.

“Considering the public explanations made by the Service, the release of the footage cannot be considered proportionate or adequate due to the following circumstances:

As is known to the public, the Public Defender’s Office has been involved in the monitoring of Mikheil Saakashvili’s treatment. The 7th report issued by the group of specialists/experts set up by the Public Defender was published on December 6, 2022. According to the assessment of the group, compared to the previous period, encephalopathy, sensorimotor neuropathy, anemia have worsened, and newly discovered autonomic neuropathy has been added with a significant drop in blood pressure upon standing up. Anorexia has transformed into life-threatening cachexia, which had been repeatedly predicted by the group of experts, and at the time of the evaluation, the patient was in a phase of active catabolism (self-digestion), which was proved by a very rapid weight loss.

The expert opinion of December 6, 2022 contains an additional diagnosis, which was not made public due to its sensitive nature (information about the above has been provided to Tbilisi City Court). On December 6, 2022, the group of experts assessed the general condition of the patient as serious.

The release of footage by the Ministry of Justice on December 14, 2022 questions the validity of the medical diagnoses of patient Mikheil Saakashvili. The mentioned reasoning categorically contradicts the medical assessment made by the group of experts. It should be noted that the patient’s aggressive behavior is considered one of the possible characteristics of the diagnoses identified. Based on the above, it is not allowed to use medical condition against a prisoner. The State is obliged to help the imprisonered patient, to provide appropriate help to him and not to use his medical condition against him,” reads the statment.

ThePublic Defender’s Office also points out, as dates indicated, the majority of the recordings reflect the periods at the beginning of October 2022 or earlier. Public Defender’s group of experts note, the prisoner’s health deteriorated sharply in October-November, adding as the doctors note treating the patient, October 4, 2022 (the day shown in the most of the video recordings) is a day when there was an attempt to hold a trial in Mikheil Saakashvili’s ward, which resulted in his special emotional reaction and the sharp deterioration of his medical condition began right after that day.

“Mikheil Saakashvili was much weaker as of December 6, according to the experts’ assessment, and this is proved by the last episode of the footage. Accordingly, public interest in the current condition of the prisoner cannot be satisfied by disclosing the footage of the past period. At the same time, the footage does not contain any clear evidence of simulation by the patient, while the current condition of the prisoner, as already mentioned, does not exclude possible aggressive behavior.

According to the evaluation of the Public Defender’s Office, at this stage it is necessary to take adequate medical and legal measures focused on the real needs of the prisoner/patient and oriented to the full protection of national and international human rights obligations.

The Public Defender’s Office also calls on the Personal Data Protection Inspector, taking into account the high public interest, to conduct the examination initiated by its service relating to the mentioned case in the shortest possible time and to have an appropriate legal reaction,” reads the statement.