Prof. Alexander Etkind on Russian Defederalization and the Expected Outcomes 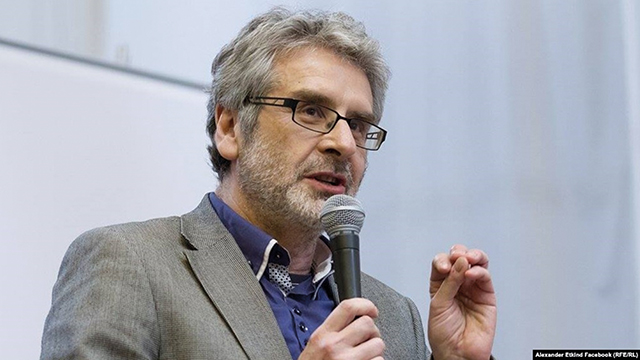 I predict Russia’s defederalization. It’s going to happen, but I can’t predict when. It could happen in a year, or decades from now, – Prof. Alexander Etkind, Russian historian and cultural scientist, Professor of History and the Chair of Russia-Europe Relations at the European University Institute, tells Radio Free Europe. “The key issue is the political economy of oil. All that comes from Siberia goes to Moscow, and Moscow redistributes it. When and if Moscow can’t do it, they will not have these billions. Then people in Chuvashia will be surprised, and people in Chechnya will be protesting, as this is their bread and butter and weapons. And if they don’t have it, they will have to find some other source of existence. It will change things for everyone. Whoever has a river, whoever has access to the sea, railway; whoever has national resources or manufactured goods, or educational facilities to attract foreign students, they will try to get by with that.

“The trigger for this defederalization is the war, which has triggered a chain of events which almost unavoidably leads to the collapse of the Russian Federation. The most important people in this development are the locals, the native peoples of Tatarstan or Bashkortostan, Siberia, northern Russia. They have not been listened to for a very long time, because they had no relevance. Some of them are almost extinct, like the Khanty-Mansy, but some of them are numerous and prolific like the Tatars.”

You claim this disintegration could have been avoided by simply not starting the war. Why was that such a fatal mistake?
There are people who believe that if Russia wins, everything will go back to the status quo of February 23, back to “business as usual”. The “rational elite” hope the damage will be undone and the trade partners will come back to the table, and everything will be fine. There will be losses, but acceptable losses. But even if Russia wins, and I don’t believe it can possibly happen, it will take at least three generations, some 50 years, to create some kind of civil peace with Ukraine. Though technically the sanctions could be stopped or reversed, they will be connected to the reparations of Ukraine. And then of course, there is the tribunal of war crimes, of genocide. It will have material consequences, but people cannot be resurrected; someone who is has been raped cannot be unraped.

Do you expect this defederalization to happen peacefully?
No. The mammoth Soviet Union dismembered itself peacefully, there was not much blood on the streets, but then came war in Chechnya, followed by war in Georgia, and then the war in Ukraine. The violence was delayed, but it happened nevertheless. When it comes to Russia, the best scenario for the dismemberment process is if it follows the established administrative borders and structures. The existing administrations have only rudimentary powers, because they have been curtailed by Putin’s government over decades. They may take power and start negotiating amongst themselves, but, of course, these borders would not satisfy everyone, as they were drawn by Soviet officials.

And Russia will do everything to prevent this development, allowing it only when it is unable not to. But 85% of all the Russian troops are deployed in Ukraine, and they came there from Siberia, Sakhalin, Ossetia, from the Chinese border, where they were stationed for a purpose: the disputed Chinese border has had to be patrolled since the times of the Russian Empire. If something happens, Russia will have either to stop the hostilities in Ukraine and send the troops back, or have no troops available at all. Of course, there is always the nuclear option, although, as Russia hasn’t used them in this major, existential war on the territory of Ukraine, people in all those federal subjects, on the territory of the Russian federation, will have good reason to believe that they won’t be used against them either.

The Russian federation has over 20 federal subjects. Who would you expect to leave if defederalization really happened?
The ethnic republics, especially those with borders with foreign countries. They will have better chances of survival than those who are landlocked within Russia. Sea routes, river routes will also help. Foreign borders, transportation, natural resources, goods to trade with. And, of course, having coherent ethnicity will be a major determinate. In Tatarstan, for example, there are fewer Tatars, because they started viewing themselves as Russians. Identity is changing. Religion will play a role – Islam is blooming. Language issues are critical.

What would happen with Russia’s nuclear arsenal?
That will be a major concern for everyone, despite the treaties of non-proliferation. We know from the Budapest Memorandum that the Ukrainian case has given a very bad example of how it should not work. One scenario will reproduce 1991, where all the missiles and nuclear pride would stay with Moscow, and everyone would sign whatever was necessary and it would be Budapest 2.0. There could be other scenarios, but to talk about them now would be pure speculation.

With 80% of Russian forces being deployed in Ukraine, which neighbor might be tempted to exploit the situation?
It’s an issue of cost-benefit analysis. China would benefit most, but also Japan. Japan has been trying to get the Kuril Islands back for decades, and now we’re reading that some of the submachines and artillery battalions from Kuril that Russia redeployed were killed in Ukraine. Kuril is a disputed territory, there was no peace agreement, so if the Japanese land there, they won’t violate any international law.

China is another issue – can they afford it? For American observers, wouldn’t it better if China showed some interest in Siberia rather than Taiwan? There is much more to gain in Siberia. If there is a new Henry Kissinger sitting somewhere in the depths of the State Department, if they really wanted to do something new, original and creative, they’d strike a deal with Russia – go to Siberia, leave Taiwan. But maybe there are no such people in the State Department.

What would it mean for Georgia and its two Russian-controlled enclaves?
Georgia would have to see how to use this new configuration to its benefits. They would probably be interested in new border concepts with the new neighbors. As for Abkhazia and Ossetia, clearly Russia has more important things to do, seeing as more than 80% of the troops they had there have gone to Ukraine. Ossetia and Abkhazia will feel the heat once things start happening, and they would have to decide, unable to rely on the military power they are used to. The people of those two “republics” will also have their say, with not that much to fear.