Pride, Media, And Supporters Make a Stand Outside Parliament 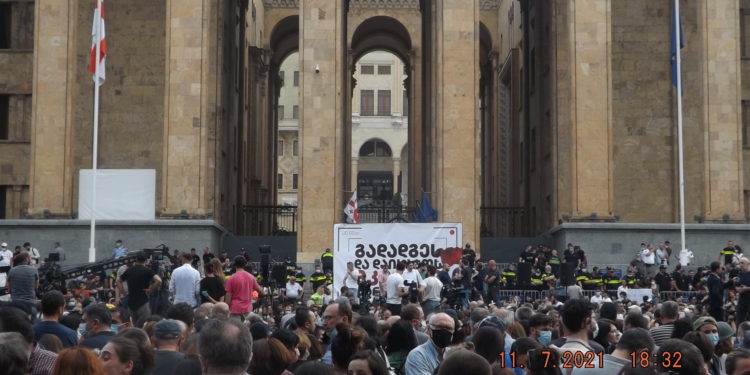 In the wake of the death of TV Pirveli cameraman Lekso Lashkarava, multiple media outlets and Pride organizers gathered on the steps of Parliament on the afternoon of July 11. With hundreds of supporters and squads of journalists, including much of Georgia’s mainstream media outlets present, the gathering filled the square. However, as the protest continued, it was apparent that a significant sector of the group were less impassioned than others. This piece, and it’s photo components, encompasses the experience of the author deployed on the ground during the core of these events.

The majority of supporters began gathering ahead of the advertised time of 18:00. As time passed, more supporters and journalists began to filter in and develop the large group seen around 19:00, but with many on the outskirts minding little to the vigorous speeches being made on the stage. Multiple socio-political figures took to the microphone to make impassioned, intense, and at times volatile cries for action from the people and the government.

Vakho Sanaia, a television reporter from Formula, opened the rally and introduced many of the prominent individuals. Inga Grigolia, another television personality from the popular media outlet Formula, took the microphone next, complimenting the calls of Prime Ministerial resignation. Eka Mishveladze from TV Pirveli, Nika Gvaramia as director of Mtavari network, Giorgi Targamadze from Formula, Diana Trapaidze from TV Pirveli, Eliso Kiladze as owner of the newspaper “Qronika +”, Misha Mshvildadze from Formula, and Paata Iakobashvili from Mtavari all made spirited and emotional speeches from the organizations pulpit.

With overt approval from the crowd, the speakers were direct in their demands from the government. While it could be argued that the demands of resignation are unlikely to be heeded, the zealous calls for action were lauded even by many of the media present. However, information from inside Parliament has pointed to influences, including that from foreign entities, that the ruling Georgian Dream party intends to make changes. The current Prime Minister, Irakli Garibashvili, may have a sooner than expected exit date.

Kakha Kuchava, according to inside information, is slated to become the next Prime Minister should this transfer occur. The former mining executive retains much of his businessman visions and is seen as somewhat of a moderate in his position as a leader in Parliament. However, it is noted that his mining operations in the deeply historic area around Bolnisi caused concern, despite the operations being pushed by Bidzina Ivanishvili. While it is uncertain what will happen, even if there is a transfer of power, the push on the ground is determined.

Following the orations, the movement was directed to move to the front of the government administrative building as they waited for their demands to be fulfilled. Police maneuvered quickly to establish a line of defense, with some special units being organized in the center of the formation. Protestors took positions around them, many of the youth simply sitting on the steps in front of the police, but some making statements to the police about their activities.

Nika Melia, chairman of the United National Movement, made an appearance. Surrounded by television media, he made statements regarding the division being made in recent days. While many of the people began to disperse as the night went on, some firmly held their position along the police line. Slowly, the protest began to reduce in energy and intensity.

Much of the overall protest seemed to be loosely organized, with the aforementioned portion being slightly dissociated from the vehement energetic statements by the leadership. Compared to the movement and tactics of their opposition in previous days, there seems to be less vigor in the heart of the movement. The head of Tbilisi Pride, Giorgi Tabagari, recently made statements accusing the state’s intelligence and security services of aiding their opposition.

While unconfirmed, it is without the proposition that many of those involved in those organizations most likely have the professional experience to exploit this avenue. A notable portion of the opposition groups of Pride consist of individuals that previously served in military and security roles. These individuals are proficient in their use of open-source intelligence, or OSINT. Using this publicly available data and gathering information is something they are efficient at, and when used against an opposing political group, can allow for faster maneuvering and countering their opponents scheduled events.

Despite this, the developing combat between the two groups is dividing the population and is destructive to the social fabric of the nation. In addition, the obvious observance by Russia is drawing a disconcerting grin on the faces of their intelligence groups directors, as well as the Kremlin. While both sides of the growing issue need to make concessions and come to agreements, their continued aggression is a threat to the national security framework. Division and instability, regardless of the promulgator or instigator, must be extinguished to prevent foreign enemy actors from exploiting this and operating with further freedom in the country.