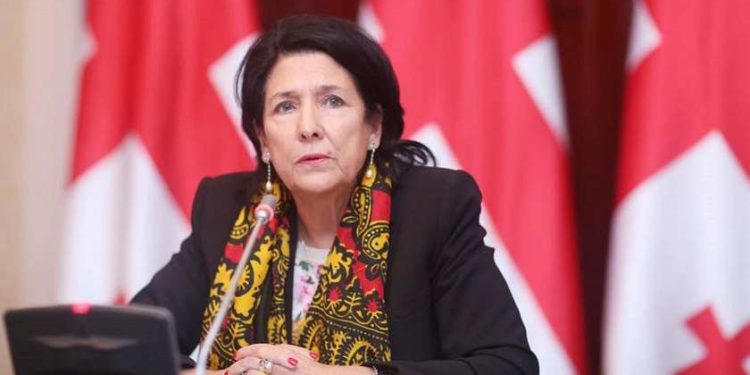 “We have lost a lot of time and we are still losing it today in endless controversy and polarization.” – President Salome Zurabishvili

“We have lost a lot of time and we are still losing it today in endless controversy and polarization. The only way forward is to move towards unity and our common goal in a coordinated manner,” said the President of Georgia Salome Zurabishvili at a solemn sitting dedicated to the 100th anniversary of the first Constitution of Georgia.

She pointed out that despite the fact that the ongoing national and democratic processes in the country have been hindered constantly, internally and externally, no one could take away the country’s basic democratic values, which were strengthened by the 1921 Constitution.

“One hundred years ago today, the Constituent Assembly of the independent Democratic Republic of Georgia adopted the country’s first Constitution.

“Because of the Soviet occupation, that Constitution lasted only four days, but it became a symbol of what an independent and democratic Georgia should have been.

“The first Constitution of Georgia reflected at that time such progressive and democratic provisions that were mere theories before: parliamentarism and a balanced system of government, universal, equal, direct, secret and proportional elections, abolition of the death penalty, the introduction of the institution of juries, freedoms and rights of citizens, their equality before the law, regardless of gender, nationality or status, the free socio-cultural development of national minorities, universal suffrage – electoral equality for women and men. Already in 1918, the election of woman MPs, including the first-elected Muslim woman in the world, was a legal echo of society.

“Although internal and external hindering of the national and democratic process of Georgia were constant, no one could deny us our core democratic values, enshrined in the 1921 Constitution.  One hundred years ago showed clearly how important for the country’s progress – from independence to the present – the unanimity of the nation has been. The Constitution is the axis and backbone that preserves the State and strengthens its foundation. Thus, the Constitution, on the one hand, is our spiritual, historical and legal connection to our country’s past. At the same time, it is a true pillar of our modern State and the foundation of our future: “The present born from the past is the parent of the future!”

“It should be clear from this that the violation of our legal basis is also a violation of the State. The overthrow of Zviad Gamsakhurdia’s legitimate government was a direct disregard of the Constitution. Any such attempt today (even when using the names of Zviad Gamsakhurdia and Merab Kostava) contradicts the fundamental democratic principles enshrined in the first Constitution and, therefore, against our statehood.

“We have lost a lot of time and we still lose it today in endless controversy and polarization. The only way forward is to move toward unity and toward agreed steps to a common goal.

“We can all be proud of the latest version of the Constitution. This new edition is based on the idea of ​​human dignity as a supreme value. It establishes a sophisticated, new type of European parliamentary government, with a strong parliament, strong leverage in the hands of the opposition, an effective government, an independent judiciary and a President above partisanship. It introduces a number of new rights – social, public, ecological and health, thus enshrining the document in the ranks of leading constitutions.

“I am proud to belong to the emigration who lived by the 1921 Constitution and believed in its restoration till the end. I am proud and feel a great responsibility, as the highest obligation of the President is to protect the Constitution and adhere to its principles.

“I believe that with unanimity and unification around our core values, Georgia will become a strong European state – exactly the country our ancestors dreamed of when they adopted Georgia’s first Constitution. Exactly as our Constitution dictates.

“Congratulations once again on this day!”, the President stated.

The event dedicated to the 100th anniversary of the first Constitution of Georgia was opened in the Parliament with the Georgian National Anthem today.

Chairman of the Parliament of Georgia Archil Talakvadze and President Salome Zurabishvili addressed the audience.

“We can boldly say that today our constitutional order is not endangered, this is the consensus of the Georgian people,” nominee PM Irakli Garibashvili said.

Irakli Garibashvili recalled February 25, 1921, and said that “100 years after these events we still see the enemies of statehood, the modern neo-Bolsheviks, whose target is the law and the constitution.”

He added that “The typology of neither internal nor external enemies of Georgia will not change.”

“I believe that at this important stage of the democratic development of the Georgian state, when we are preparing to apply for EU membership, the Constitution of Georgia will again connect the past and the future of our country,” said the Speaker of the Parliament Archil Talakvadze.

On 21 February 1921, facing the onset of Soviet aggression, the Constituent Assembly of Georgia adopted a constitution of the Democratic Republic of Georgia, the first modern fundamental law in the nation’s history.

The Constitution adopted on February 21, 1921, counts 100 years. Tragically, soon after its adoption, Georgia was occupied by Russia again and the constitution was suspended. Public figures who played the leading role in the development of the constitution were: Noe Jordania, Pavle Sakvarelidze, Sergi Japaridze, Giorgi Gvazava, Mikheil Rusia, Levan Natadze, Ioseb Baratashvili, Akaki Chkhenkeli, Giorgi Naneishvili and others.

Despite its short existence, the 1921 constitution is considered a fundament of Georgia’s independent statehood. The constitution also formalized basic subjects for the country, such as state language.