President of Georgia Awards Pilots, Rescuers and Doctors Who Died During Gudauri Tragedy with Medal for ‘Civil Dedication’ 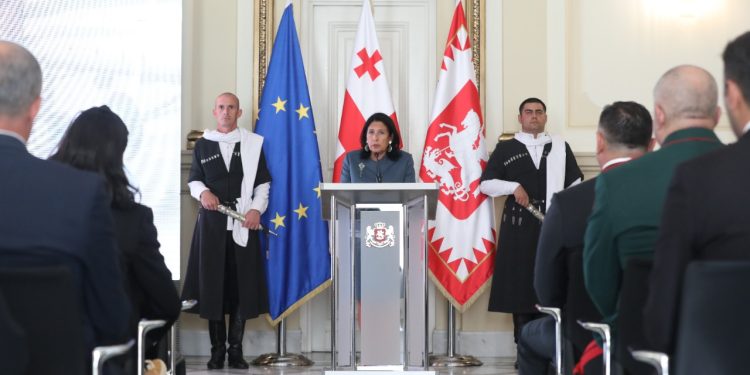 The President of Georgia awarded the pilots, rescuers and doctors who died during the Gudauri tragedy with a medal for “Civil Dedication.”

“I would like to greet the families of the fallen heroes, I share your grief: It is not only your grief, it is shared by the whole country. I would like to greet the Minister of Internal Affairs, the Minister of Health, and the honorable guests. We have gathered here to honor heroes. This is called self-sacrifice when you sacrifice yourself to save someone else. This is probably the highest human virtue when you can sacrifice yourself for someone else’s life. We should never forget this,” stated Zurabishvili.

At the ceremony held in the presidential palace, the Minister of Internal Affairs once again expressed his deepest sorrow over the tragedy and made a promise to support the family members of the deceased.

Gomelauri expressed gratitude to the President of Georgia -for rewarding the deceased employees. The minister also thanked the Prime Minister Irakli Garibashvili, His Holiness and Beatitude – Ilia II, the announced patriarchal “Locum Tenens” Archbishop Shio and the entire Patriarchate for their support.

“During this operation, 8 people died – 4 pilots, 2 rescuers and 2 doctors who tried to save other people’s lives. It was an ordinary rescue operation; however, unfortunately, it ended in an enormous disaster. We have lost our heroes, professionals. I would like to stress once again, we will always be by your side as much as possible to ease this great pain. Today’s event is the clear declaration for this, and I would like to express my sincere appreciation to you, Madam President. It is a great appreciation for everyone, the entire Ministry of Internal Affairs, and I want to thank you on behalf of everyone.  I would like to thank Mr. Prime Minister for his support and appreciation. I’m also grateful of our Patriarch, His Holiness and Beatitude – Ilia II, Archbishop Shio, other Archbishops and whole patriarchate for the support and sharing this pain,” stated Gomelauri.

The Minister of Internal Affairs made a decision, four pilots and two rescuers who died during the tragedy that took place on July 29, were awarded with the first degree medals of the Ministry – “for special merits.”

With the decision of the Prime Minister of Georgia, Irakli Garibashvili, the families of tragically deceased pilots, rescuers and doctors received 100 thousand GEL as material aid.