President: No-One Should be Able to Harm our European Path Inside or Out 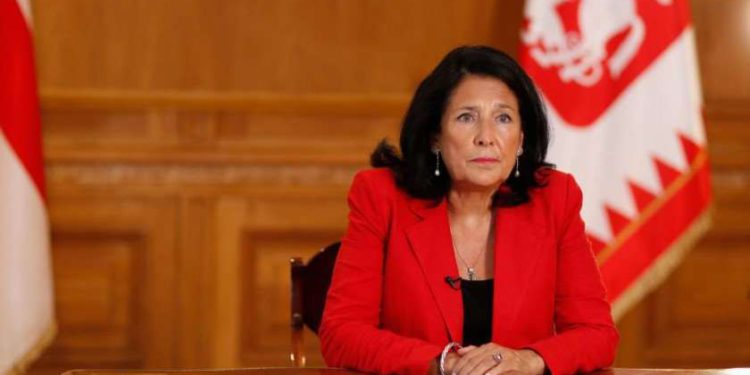 “Democratic and fair elections must be held in this country and no one should be able to harm Georgia’s European path inside or outside,” – President Salome Zurabishvili stated when discussing the challenges the country is currently facing.

She noted that Georgia is at a crossroads, just as it has been more than once in its history.

When commenting on the upcoming local elections in October, the President pointed out that in the face of pandemics and economic crises, in the face of regional challenges, the only way is to finally end polarization.

“Today’s pandemic numbers should worry us. Opponents of vaccination need to understand that their behavior is neither a question of personal choice nor of freedom of expression, but rather a direct threat to others, to their family members, their neighbors, their friends, but also to the population of this small country, to its health, to its life. Thus, a threat to its future. True patriotism is not in bragging or violence, it’s not in muscle play. Patriotism and courage go through vaccination, self-awareness, and a sense of responsibility as members of society.

“Our second challenge concerns our European path, a path that I have considered since the day of my arrival in this country as its one and only path. In this, my predecessors were Ilia Chavchavadze and Niko Nikoladze, Sulkhan-Saba Orbeliani and Ekvtime Taqaishvili, and not because they worked for foreigners, not because they did not defend their selfhood or cared less about their identity than we do: They were my predecessors because they could not imagine a better model of economic and social development and partner than Europe. Attempts to convince us that Europe is not a land of freedom, solidarity and Christianity but a path toward perversion only work to try and separate us from our only path… And we understand well in whose interest this falls.

“Just as in the fight against the pandemic, true patriotism requires that we put the interests of our country above all else. Patriotism means protecting the country. It means taking care of our country like we do our own reputation and name, as nobody will be able to deprive us of respect. This applies to everyone. We demand respect from foreigners and say we are annoyed by their instructions, their criticisms, their remarks. But to be respected, and I’m convinced that Georgia deserves it because of its past, we must respect ourselves and we must respect our word. This means fulfilling our obligations, a must for gaining and maintaining trust. It also means that we should not undermine our country on the outside, we should not engage in a campaign of active discrediting to achieve narrow party goals. It’s shameful to see your own citizens work to tarnish the image of the country or even demand that the country be punished in different ways.

“Independence cannot and should not mean any form of isolationism, because as soon as you are left alone, weakened, exhausted, you naturally become the target of those who have a constant desire for expansion and your subjugation. Everyone must understand the current reality in our region and in the world and particularly what it means for our small country with occupied territories. This was well-understood by our ancestors. This is how they brought this country to this day, by constantly searching for real partners to avert the greatest danger of their time. It was called diplomacy and we possessed this art at the highest level. Even today, our chosen partners and our close cooperation with them are our best foothold, the foundation of our development and our path to de-occupation with no alternative.

“That is why I believe, and I even told the representatives of the ruling party, that the process of preparing the [Michel] document was extremely positive, because the involvement in Georgia, in the Caucasus, in the EU’s neighborhood of the President of the European Council, one of the main political figures in the European Union, is very important for us. This is a real bridge between us and Europe. It must be understood, valued, used and taken care of!

“I personally take some responsibility and I am even proud to have supported the involvement of the European Union at a time when the political crisis in the country was at a standstill. However, I cannot take responsibility for certain elements of the document that were agreed between parties, nor agree with its “annulment”. However, today, the post-facto ‘discovery’ is that it turns out we gave up something that was unacceptable and that might harm the country is incomprehensible. In my experience, red lines are crossed before signing. I believe that the process behind this document, the goals that this document pursues and the principles on which this document is based on are not exhaustive and represent the path that this country must go through and that I support.

“I listened to everyone yesterday and I would like to emphasize the responsible attitude of the parties that entered Parliament on the basis of this agreement, worked and still work today, on creating a model for the depolarized Georgian political spectrum. I want to thank each and every one of them. I also share their view that the document has fulfilled its original purpose: the political crisis is over, stability has been strengthened, a multi-party Parliament has been formed and the political process has shifted from the street to Parliament, and we have adopted a new election code (I also hope that we’ll see an agreement on lowering the barrier, which is a must for the appearance of new parties). The result of this document is that some opposition forces failed to take to the streets, lost all resources of destabilization and, by not signing, marginalized themselves. This is why I disagree with the ruling party’s assessment that polarization has not been reduced, an argument used for their leaving the document. The document reduces this polarization, weakens it, and I am sure that this process will continue in spite of everything. This is the only way to strengthen the stability and independence chosen by the society of our country.

“In the face of pandemics and economic crises, in the face of regional challenges, our only way is to finally end polarization. We have local self-government elections ahead of us, the appointment of which I signed August 3. These elections should be exemplary, the rights of all subjects should be protected, which excludes violence, hate speech and insults, use of personal data, calling competitors “traitors”, obstruction of professional activities for the media, spreading of fake news and other applications of pressure.

“Our population expects such elections and such an election environment from us. I, as the guarantor of democracy, stability and Europeanness in this country, call on them to be involved and active, as our partners expect, and we ask these partners to appoint numerous observation missions: democratic and fair elections must be held in this country. This is what I came for and this is what I’ll be here for,” the President stated.