President: In Order to Move Forward, It’s Necessary to Be United 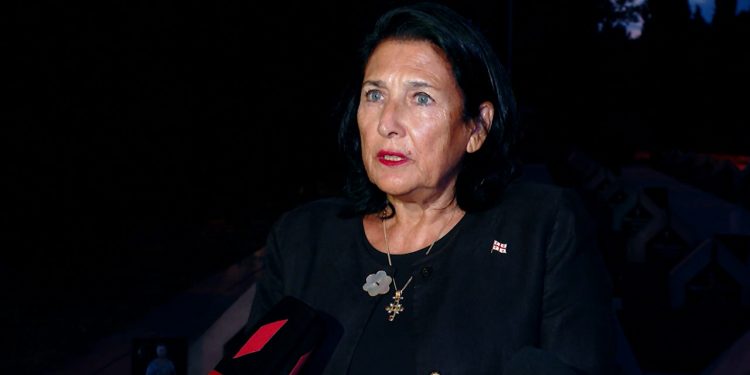 “In order to move forward, it is necessary to be united. Without unity, we will not be able to walk this road and we will not be able to reunite with the citizens who live in Abkhazia or Tskhinvali,” President of Georgia Salome Zurabishvili said at the Mukhatgvedi Brothers’ Cemetery, where she laid a wreath at the memorial of the fallen heroes.

Zurabishvili pointed out that the August War, which resulted in occupied territories, is not a victory, but Georgia still won, because today its independence, democracy and the path to Europe are stronger.

“I want to share the great importance of today’s day with the whole of Georgia. We should not turn everything into a tragedy, these are important days and battles that resulted in the occupied territories, this is not a victory, but Georgia still won, as today our independence, democracy and the road to Europe are stronger. We must take care of the people living in the occupied territories, we must not forget them or put up with this situation. For this, we must forget hatred and move forward towards the final victory. No one in this country is in favor of a new war or a second front. I don’t understand these topics, everyone in this country is in favor of Georgia becoming stronger and independent,” said Salome Zurabishvili.

Two Georgian regions, Abkhazia and Tskhinvali, remain occupied by Russia up to now and Russia continues discrimination and violence against ethnic Georgians, restrictions on the right of education in the native language, the right to property and even the right to life. Meanwhile, hundreds of thousands of internally displaced persons and refugees are still prevented from returning to their homes.