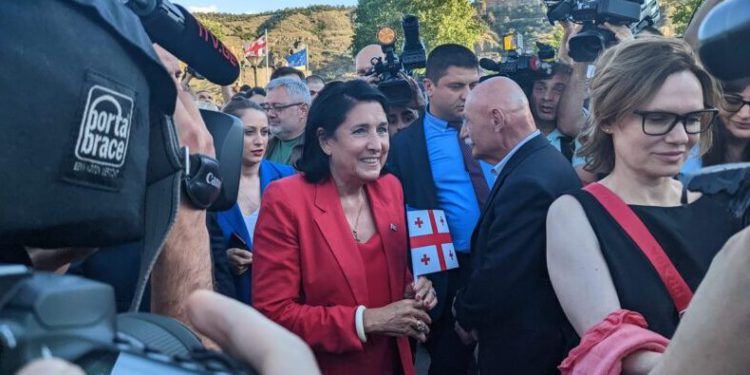 Citi­zens gathered in Europe Square for a rally in support of the European course. President Salome Zurabishvili, who initiated the gathering, arrived in Europe Square, along with politicians representing various political parties.

The ruling team refused to join the rally. The ambassadors of the European Union, France and Germany did attend.

Lelo, Citizens and the political party For Justice also joined the rally from the opposition, while the United National Movement (UNM) refused to join, as they are organizing another rally on June 20 on Rustaveli Avenue.

Politicians did not deliver speeches at today’s rally, following the President’s will.

“For me, organizing does not mean bringing people by minibuses, gathering activists, and so on. It is about an expression of the free vision of a free nation. This is what we need to learn. We will learn it slowly,” she noted.

The President said that she has no blind optimism about the results.

“It is very important that no one interferes with this process. We have not chosen this date to compete with anyone. I knew there would be the first recommendation on June 17. Tomorrow, there will be a recommendation from the Commission, after that the European Union will make a decision on June 23-24. The fact that I came here is an indication that I am not blindly optimistic about the results, but I believe that Georgia has the right to be where its people want it to be. We all have to do everything for that. The responsibility lies with the Government, which must take steps, and tomorrow’s recommendations will show us the direction in which the steps should be taken,” she claimed.