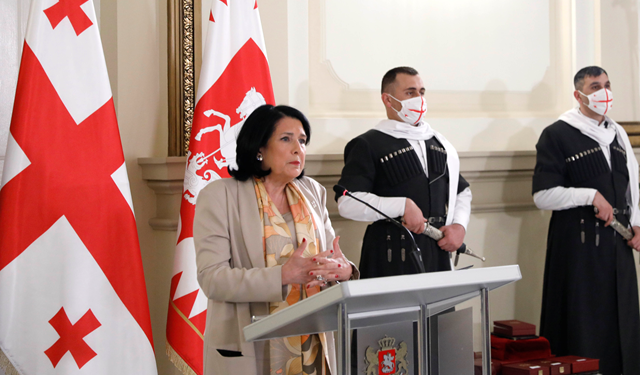 “The role of women in our country is special and it follows us from history as a characteristic feature of this country. Equality that is talked about a lot today and that which is a goal for many countries is a given for us.” – President Salome Zurabishvili

The President of Georgia Salome Zurabishvili awarded eight women working in the field of culture with the Order of King Tamar in a ceremony held at the Orbeliani Palace.

Among the awardees is art critic Elene Kavlelishvili. She was awarded (after her death) for outstanding personal contribution to the research and protection of the Georgian national treasure, for outstanding public work.

Opera singer Medea Amiranashvili was awarded the prize for the development and popularization of opera art.

Actress Natela Machavariani was awarded the order for her outstanding personal contribution to the development of Georgian theatrical art.

Art critic Ketevan Kintsurashvili was awarded for her outstanding personal contribution to the research and popularization of Georgian art.

Director Keti Dolidze was awarded the prize for the development of Georgian theater and cinema.

Rusudan Mirzikashvili, Advisor to the ICOMOS International Secretariat, was awarded the Prize for the Protection of Georgian Cultural Heritage and for promotion Abroad.

“The role of women in our country is special and it follows us from history as a characteristic feature of this country. The equality that is talked about a lot today and that which is a goal for many countries is a given for us.

“This does not mean that everything is fine. There are still many steps to be taken, even on issues such as equalization of wages and the involvement of women in politics.” Zurabishvili said.

The President also spoke about violence against women, noting that it is related to the current social situation in Georgia and that violence “is not part of Georgian culture.”

“It is unfortunate that so many women have left the country to help their families financially and to send the necessary assistance from there. This means separated families, separated children, and mothers, which in itself poses a serious problem for family education, which is an integral part of a full education. If there is no family that first educates the child, then we are dealing with very serious social and psychological problems.

“Therefore, it is a challenge for our country, which we must take care of. This should probably be one of the main political priorities,” she suggested.

The President went on to note that the country should not waste time in political controversies and polarization, and should instead take care to solve the problems that the country is facing.

“We decided to select eight women from different directions in the field of culture for March 8, and this would be a symbol of what Georgian women can do.

It is also symbolic that we are giving the Order of King Tamar to these women, which is a reminder of the past that strong women are not new in Georgia and this is historically confirmed,” the President said.