Political Roundup of the Week 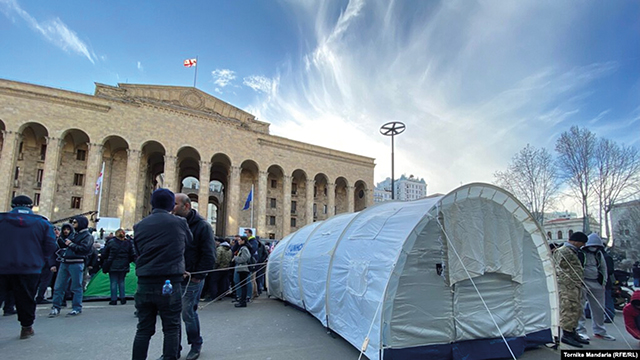 European Council President Charles Michel released a new proposal on April 18, suggesting electoral and justice reforms and offering a pardon for all violations and convictions stemming from the 19-21 June 2019 protests. The ruling team and a part of the opposition parties signed the new agreement presented by Michel on April 19.

Based on the mediators’ document, the persons assessed as political prisoners had to be released within a week after the signing of the agreement between the government and the opposition. In addition, based on Michel’s proposal, early elections should be called in 2022 if the Georgian Dream party gets less than 43% of votes in the local elections.

To date, only the United National Movement and European Georgia parties have refused to sign the EU Council’s updated compromise document. Yet, Charles Michel said he is convinced that the assumed obligations will be fulfilled.

After a 6-month boycott, opposition parties that had signed the EU-mediated agreement with the ruling Georgian Dream party entered Parliament on April 27 to submit an amnesty bill, which President Salome Zurabishvili had agreed to sign, and to take part in the plenary session of the spring session. United National Movement (UNM) supporters greeted the opposition on arrival at the parliament building with jeering, protesting their “betrayal.”

UNM, one of the biggest opposition forces in the country, is expected to sign the Michel agreement and enter Parliament once their party chairman, Nika Melia, is released from custody. His trial will take place on May 13.

To ease the situation, the European Union proposed to pay the 40,000 GEL bail imposed on Melia. The party chairman agreed, but stipulated that the proposed GD amnesty bill be withdrawn.

“Withdraw the amnesty bill, and in this case, I, Nika Melia, take full responsibility to agree to the bail offered by the European Union and leave prison,” he told the opposition parties who had signed the Michel document.

The currently imprisoned UNM Chairman, who stands accused of organizing group violence during anti-government protests in June 2019 (so-called ‘Gavrilov’s Night’), publicly asked the opposition parties “not to take part in this attempt to rewrite history, this ‘amnesty’ for Gavrilov’s Night.”

“We will pardon abuser Melia anyway. This is our decision,” Irakli Kobakhidze, the Chairman of the Georgian Dream party, told journalists this week, noting that Melia can leave prison whenever he wants.

“We hear that sometimes Melia doesn’t want bail, sometimes doesn’t want amnesty. He can come out any time, but he is choosing not to do so. Whether through bail or amnesty, in both cases, it is up to Melia to decide. He may or may not accept the amnesty law. This possibility is also reflected in the law on amnesty.

“If he does not agree to bail, we will pardon him anyway. This is our decision. And he can enter parliament if he wishes,” Kobakhidze said.

The GD Chairman added that if the opposition did not support the amnesty bill, it would be against the agreement which was signed by both sides.

This political week in the country was memorable for yet another unexpected move by the ruling team management: on April 24, Chairman of the Parliament of Georgia Archil Talakvadze resigned. He will continue his political activity as Vice-Speaker.

Talakvadze noted that after reaching an agreement with the opposition, there was a need for a rotation in the parliamentary majority, which is why he “gave up the speaker seat and moved to the parliament hall.”

Following Talakvadze’s resignation, the Georgian Dream nominated Kakha Kuchava, the former Deputy Speaker, for the position. He was elected as Parliament Speaker on April 27. As a result of a secret ballot, 86 deputies supported Kuchava’s candidacy, while six MPs voted against.

Before the vote, Kuchava addressed the MPs, expressing hope that the rest of the opposition will also enter parliament.

On the same day, as part of Michel’s agreement, the President of Georgia, Salome Zurabishvili, pardoned the convicted Giorgi Rurua, a shareholder of the opposition-minded ‘Main Channel.’

“I welcome the fulfillment of the first stage of the agreement! For my part, I kept my word and signed the pardon act. Congratulations to Kakha Kuchava on his appointment as the Speaker of the Parliament. Congratulations to all the MPs who used the mandate given by the people for the first time today and entered Parliament. I wish you all success,” the President stated.

His release was one of the demands made by the opposition as a precondition to enter Parliament.

He left the penitentiary facility the same day, April 27. After his release from prison, he commented on the amnesty bill and noted that if the victims of June 20 will forgive the accused, he will not oppose the pardon.

“In general, it is important for me that a general national amnesty is announced, it is very important. Now, when the case is not being investigated, what kind of amnesty should we talk about? The key is to conduct an investigation, then the victims will make the appropriate decision whether to forgive or not. After that, if they forgive those accused, I will not oppose a pardon,” Rurua said.

Regarding the possible release of convicted UNM Chairman Nika Melia, Rurua noted that if he “was in Melia’s place, he would accept the bail offered by the EU.”

Melia’s trial and the court’s decision regarding his case is expected to have a serious influence on future political developments in Georgia.