Political News of the Week at Home and Abroad 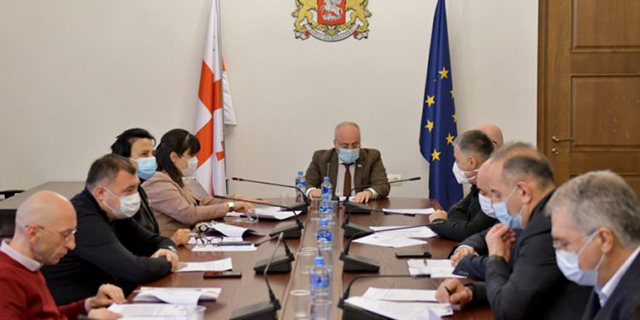 Possible aggression by Russia toward the sovereign nation of Ukraine has been one of the most actively discussed topics in the panels of global affairs and international relations of late.

President Zelensky and the Ukrainian people have been in the global spotlight in messages of solidarity to prevent a devastating war and maintain peace at the very borders of NATO and the European Union.
Chairman of the ruling Georgian Dream (GD) party, Irakli Kobakhidze recated to the global issue by noting that while they support Ukraine, Georgia’s response will depend on how events unfold.

“The starting point for us is the sovereignty and territorial integrity of Ukraine. These are the principles by which we will be guided. We will observe the events as they unfold and take respective steps,” the GD Chair said, adding that he has no current plans to visit Ukraine. “I am not going to visit Ukraine. We are watching events and depending on how they unfold, we will make a specific decision. We will decide on any step according to the developments, be it a visit or a statement. We have expressed a very loud position in our resolution regarding the current events in Ukraine,” he said.

The GD Chairman also noted that all efforts were being made to ensure the security of Georgian citizens in Ukraine.

“Yesterday, the Ministry of Foreign Affairs issued a statement addressing Georgian citizens in Ukraine. Of course, we will do our best to ensure the safety of our citizens when needed,” he said.

“Given the high probability of further escalation in Ukraine, the Embassy of Georgia in Kyiv and the Georgian consulates in the cities of Odessa and Donetsk (with residence in Kyiv) have switched to an emergency working regime. A hotline has been set up for the citizens of Georgia in Ukraine: +380 (63) 376 77 68; +380 (93) 761 17 17. Georgia’s diplomatic representations keep constant communication with Georgian citizens in Ukraine and urge them to take into account the difficult security situation on the ground.”

At the same time, the US and the EU member states have called on their citizens to leave the territory of Ukraine.

The Russian Military
Russia on Wednesday said military drills in Moscow-annexed Crimea had ended and that soldiers were returning to their garrisons.

“Units of the Southern Military District, having completed their participation in tactical exercises, are moving to their permanent deployment points,” Moscow’s defense ministry said in a statement.
State television showed images of military units crossing a bridge linking the Russia-controlled peninsula to the mainland.

It comes a day after Moscow said it was pulling back some of the troops deployed at its neighbor’s borders.

However, Western leaders, including US President Joe Biden, remain concerned that Russia could still launch an attack on Ukraine.

The document prepared by the Communist Party was supported by 351 deputies, 16 went against, one abstained. The version submitted by United Russia was supported by 310 deputies. As a result, the document of the Communist Party was selected. As such, the appeal of the chairman of the lower house of the Russian Parliament, Vyacheslav Volodin, for recognition of the independence of the so-called Donetsk and Luhansk people’s republics will be sent directly to the Russian President.

Georgian Delegation Visits the UK
A Georgian parliamentary delegation paid a visit to the United Kingdom this week, and on February 11, participated in a Round Table of the Council on Geostrategy in London to discuss the situation in the region and the cooperation between Georgia and Great Britain.

“At the meeting with the British experts on defense and security issues, and with the academic circles and analytical organizations, we overviewed the situation in Ukraine, in the wider region, and the risks in the Black Sea basin. We discussed the Britain-Georgia cooperation prospects in defense and security and regional cooperation in general. We will introduce these recommendations to the Georgian Government and consider them upon the planning of our further activity,” the First Deputy Chair of the Foreign Relations Committee, Giorgi Khelashvili, stated.

During the visit, Georgian MPs met with the Chief Executive of the London Chamber of Commerce and Industry, Richard Burge.

According to the Chair of the Foreign Relations Committee, Nikoloz Samkharadze, the parties discussed the investment potential and capacity of Georgia.

“London is one of the key financial hubs of the world with more than 400,000 businesses registered and paying VAT. It is a city of the greatest opportunities and, hence, we discussed the investment capacity of Georgia and informed Mr. Burge about the tax remissions Georgia established for foreign investors. We agreed to host the Delegation from the Chamber of Commerce as the pandemic allows, to introduce the investment potential of Georgia,” he stated.

The Parliamentary Delegation is composed of MPs Nikoloz Samkharadze, Nino Tsilosani, Giorgi Khelashvili, and Teona Akubardia, and the Chief of the Speaker’s Cabinet, Levan Makhashvili.

Ukraine: Saakashvili is a “Victim”
Former president of Georgia, Mikheil Saakashvili was also the topic of the news this week. Nika Gvaramia, Saakashvili’s lawyer, said the third president had been recognized as a “victim” by the Ukrainian Prosecutor General’s Office.

He noted that they are thus investigating the actions of Georgian law enforcers against Saakashvili, and says they already confirmed what was done to him, and now the only thing left is to identify the accused.

“Mikheil Saakashvili is recognized as a victim by Ukraine, with excessive use of force having been used against him. There is a fact, there is a victim, the only step that needs to be taken is to identify the accused, and, most likely, it will be the Georgian law enforcement agencies and maybe not only the law enforcement agencies, high officials and not only high officials,” Gvaramia said.

Mikheil Saakashvili, a citizen of Ukraine, was arrested in October last year after returning to Georgia.

The NSC Office provides information, analytical data, and organizational support to the National Security Council of Georgia. Identification, assessment, analysis, and forecasting of threats and challenges are among the key directions of the Office.

The PM wished success to the newly-appointed official and highlighted the significance borne by the effective performance of the NSC.

Givi Tumanishvili served as Head of the Analytics Directorate at the Intelligence Service of Georgia from 2019, while working in various positions within the Military Intelligence Department of the Ministry of Defense of Georgia.

“We will have questions for both candidates concerning their professionalism and experience, as well as their plans and visions. This process is maximally transparent and allows our society to observe the hearings,” Chair of the Committee Anri Okhanashvili stated.

After the hearing, the candidates will be voted for at the plenary session. Pursuant to the Rules of Procedure, the Parliament elects the SIS Chief with a majority of full composition to a term of 6 years.

For Georgia Member Made City Council Chairman in Zugdidi
Giga Parulava, a member of Giorgi Gakharia’s party “For Georgia,” became the chairman of Zugdidi City Council this week. 25 deputies of the Council took part in the vote. The candidate was also supported by the United National Movement. The Georgian Dream party did not take part in the vote.

Members of the party “For Georgia” also became chairmen of the Rustavi, Chkhorotsku and Tsalenjikha City Councils.

“This is a process of ending the one-party rule of the Georgian Dream in the municipalities. Chairs and high positions are not a priority for us. The election of Giga Parulava in Zugdidi is good for the people of Zugdidi in the first place because he is a representative of a party that can compromise for citizens,” said Natia Mezvrishvili, member of For Georgia.

“With consistent politics of compromise, our political party ‘For Georgia’ has begun changes and the end of Georgian Dream’s one-party rule in Georgia by winning chairmanship in four municipal Councils- proof that doing politics without radicalism and boycott is possible and brings change,” she added.

Kakha Kuchava, the Former Speaker of the Parliament, had his mandate terminated on the basis of a personal statement.

The grounds for termination of the mandates of Elene Khoshtaria and Shalva Natelashvili was their absence from plenary sessions, while Badri Japaridze lost his mandate due to the guilty verdict against him issued by Tbilisi City Court.