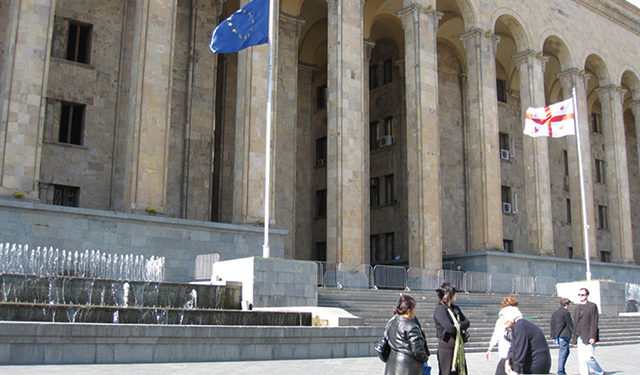 The vast majority of people in Georgia have come to loathe the entire political class. For many, the recurrent crises are more about the GD-UNM struggle than about democracy and the economic development of the country. Source: EUobserver

If democracy-building is about constantly finding intra-party consensus, it is also about addressing the needs of the people.

To get a real sense of what the internal Georgian crisis is, we need a longer-term perspective. Since the elections, the crisis has been more about inter-party fighting than a search for the resolution of the long-term problems associated with the economy and political system. There is also a growing disillusion within wider sections of the public with the political establishment. As the last several elections showed, there is also a gradual drop in support for the governing party, Georgian Dream (GD). General apathy also explains the large abstention rate of voters since the 2016 elections.

The present internal political instability can be related to GD founder Bidzina Ivanishvili’s distancing from politics in late 2020, which emboldened the opposition and set the scene for a struggle among various power groupings within GD, a trend that saps energies and the effectiveness of the ruling party.

Furthermore, Giorgi Gakharia’s resignation, occasional demonstrations, and opposition parties calling for snap elections all point to continued turmoil and protracted uncertainty in Georgian politics. Gakharia’s successor Irakli Garibashvili, renowned for his harsh rhetoric against the opposition, added to the increasingly polarizing political climate. The opposition and a significant part of the population is openly against his style of rule.

Reasons for the protracted crisis are also rooted in the unstable economic situation: despite the expected GDP growth of 4.3% in 2021, the national currency has slid significantly and is expected to depreciate further against the US dollar. Wages and the level of FDI remain low, and inflation is on the up, facilitating the outflow of the population abroad. This also means that in the long-term, Georgia will be increasingly dependent on inflows of money sent from Georgian immigrants – a clear sign of a weak economic situation in the country.

These troubles will continue to undermine GD’s third consecutive term and will complicate its bid to remain in power until 2024, the crucial year the next parliamentary elections will be held and the government will make an official EU membership bid, while the results of the 2021 municipal elections may see GD having to hold snap elections.

There is a larger disillusion with the whole political class in Georgia. General apathy with the ruling and opposition forces emanates from the premise that promises made for decades by various political parties to establish a solid base for an independent judicial system in the country have failed to be fulfilled. What is worse, this failure is usually precipitated by the purposeful maneuverings of a ruling party, whether it is UNM (2004-2012) or GD (since 2012) to extend their hold on power.

But the roots of the internal troubles could be more far reaching. Ultimately, it could be about how detached the political elites of Georgia have become from the ordinary population. The opposition is hurdled by larger antipathy from wider sections of the public. The governing party is also witnessing a sharp decline in the number of its supporters. Long-term economic problems exacerbated by the pandemic make up a major challenge for the Georgian political class. But little has been offered over the past years to salvage the situation.

The vast majority of people in Georgia have come to loathe the entire political class. For many, the recurrent crises are more about the GD-UNM struggle than about democracy and the economic development of the country. No wonder that most people consider their social and economic human rights to have been violated for years, no matter which party is at the helm. This explains the large abstention rate of voters during elections in Georgia: large sections of the population do not see a preferred party with a fitting program amidst this highly polarized political situation. Additionally, what Georgia lacked throughout its post-Soviet independence period was a long-term policy planning to re-boot its fragile economy, heritage of the troubled 1990s, but more shifting attention from inter-party politics towards the needs of the economically poor population.

Democracy is struggling, and it is not only about whether the arrest of the opposition leader was a lawful act or even an urgently necessary move. We deal here with what the Georgian public has been accustomed to since the country regained independence: the belief that the ruling party always stands above the law. This was the case with Eduard Shevardnadze and Mikheil Saakashvili, and this is the scourge that befell GD, whether it wanted it or not. For ordinary citizens, there has been no break in the near cyclical actions of Georgian political elites in 30 years.

Ultimately, these internal problems are tied into what Russia needs: internal differences in Georgia, weakening of its international standing, and hopes for NATO/EU membership dashed. In the age of reinvigorated efforts for Trans-Atlantic partnership between the US and Europe, and Washington’s larger support for NATO, Georgia’s woes are a boon for Moscow. It makes sense geopolitically, and the Kremlin watches gleefully how the Georgian parties are ruining the country’s prospects by failing to attain not only deeper Western engagement, but general internal economic development and stability, so vital a detail for being attractive to the outside world.

A larger regional outlook too might shed some light. The South Caucasus is a region housing two small and extremely fragile democracies, Armenia and Georgia. The former took a major hit last year when its dependence on Moscow grew exponentially following Yerevan’s defeat in the Second Nagorno-Karabakh War. Now, Russia is more capable of backtracking the reformist agenda of the Armenian leadership. Protests are staged, and the ruling PM is weak and challenged. Russia is playing the long game, navigating and killing the last vestiges of Armenia’s independent foreign policy.

External circumstances are converging on Georgia’s internal troubles. The country is not solely experiencing a crisis because of the missteps of certain political parties; we might be dealing here with the wider problem of growingly unfitting political elites which have become detached from the problems of ordinary people. If democracy-building is about constantly finding intra-party consensus, it is also about addressing the needs of the people. The success of this policy could ultimately serve as a backbone of Georgia’s NATO and EU aspirations.