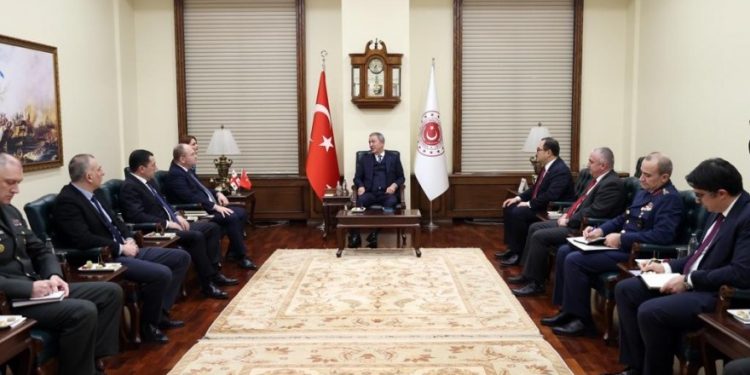 The Georgian Parliamentary Delegation, led by the Chair of the Defense and Security Committee, Irakli Beraia, met with the Minister of Defense of Turkey, Hulusi Akar in Ankara to discuss the regional security environment, the security challenges of Georgia, the importance of strengthening the strategic partnership between the two countries, as well as cooperation in the field of defense and security.

The parties attached particular attention to the security of the Black Sea and Georgia’s Euro-Atlantic integration.

The host country’s defense minister expressed his strong support for Georgia’s sovereignty, territorial integrity, and integration into the EU as well as for Turkey’s and its agencies’ full cooperation in enhancing Georgia’s defense capabilities during a meeting between the Georgian delegation and the Turkish delegation, according to the chairman of the defense and security committee.

“As the head of the Defense and Security Committee, I found it particularly heartening that the Turkish Defense Minister highlighted their close connection, teamwork, and trust with Minister Burchuladze of Georgia,” Beraia commented.

The Georgian delegation thanked the Minister of Defense of Turkey for supporting Georgia’s sovereignty, territorial integrity, Euro-Atlantic integration, and development of defense capabilities.

The meeting was attended by Deputy Chairs of the Committee, Aleksandre Tabatadze and Vladimer Chachibaia, Committee member, Alexander Elisashvili, and the Ambassador Extraordinary and Plenipotentiary of Georgia to Turkey, Giorgi Janjghava.