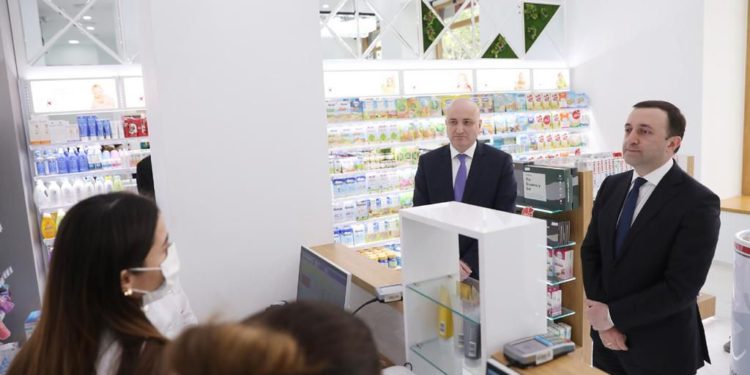 Georgian Prime Minister Irakli Garibashvili familiarized himself with sales and practical electronic and generic prescriptions for affordable pharmaceuticals imported from Turkey. Together with the Minister of Internally Displaced Persons from the Occupied Territories, Labor, Health and Social Affairs Zurab Azarashvili, the Head of Government visited one of the pharmacy networks in Tbilisi.

The Prime Minister inquired into the level of public demand on medications imported from Turkey, also into the practical adoption of electronic and generic prescriptions system.

Garibashvili spoke with pharmacists and citizens, pointing out that the Government’s priority is to maximize access to medications for citizens while ensuring quality, the reason why, he said, all pharmaceuticals imported so far and to be imported from Turkey meet GMP standards.

Turkey’s pharmaceutical market opened on January 17, Consequently, almost 250 types of medications, including for chronic diseases, are now available 60-70-80% cheaper than previously. Affordable medications from Turkey are available for sale in various large pharmacy networks across Georgia, and the list of pharmaceuticals and providers is constantly growing.

Pharmaceutical companies are actively cooperating with the Turkish side to enhance the diversity and affordability of the medications on the list. The Health Ministry has also proactively registered hundreds of medications, a step further simplifying the process of exporting medications into the country.

In addition, the Health Ministry is implementing a pharmaceutical reform to enhance access to quality medications. As a result of this reform, physical (paper) prescriptions will no longer be issued. Instead, they will be given electronically. In addition, to maximize access to medications for the population, a system of generic prescriptions was launched on April 11, meaning that physicians indicate the generic, that is, the international name of the prescribed medication. At pharmacies, pharmacists offer to citizens the three most affordable options from the “positive list” of generic medications developed by the Health Ministry. As a result of these changes, it is up to citizens to choose medications from particular manufacturers, at prices acceptable to them. The pharmaceutical reform seeks to reduce amounts paid by citizens from their own pockets and to enhance access to quality medications.