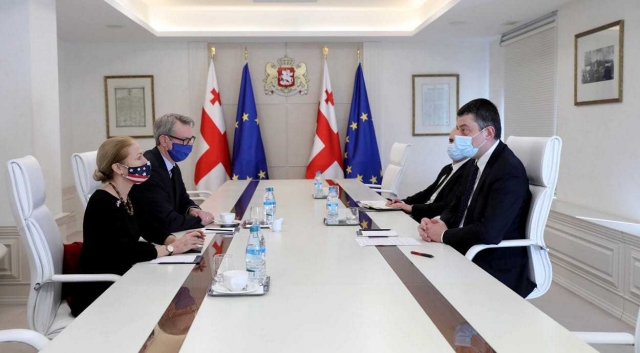 Georgian Prime Minister Giorgi Gakharia met with the Ambassadors of Georgia’s most important strategic partners the United States of America and the European Union to discuss the recent extension of the unlawful detention of Georgian citizen Zaza Gakheladze in occupied Tskhinvali.

“We discussed with US Ambassador Degnan and EU Ambassador Hartzell the Russian occupation regime’s provocative actions and the illegal detention of Zaza Gakheladze,” said Gakharia after the meeting with the diplomatic allies. “Our strategic partners reiterated their commitment to raise the issue at the highest levels of international platforms.”

Gakheladze is yet another Georgian citizen and victim of the occupation regime. He was shot and illegally detained by Russian occupation forces near the boundary line with Tskhinvali on Tbilisi-controlled territory in July 2020. On Friday, Gakheladze was sentenced to 12 years and six months in prison.

The US Embassy in Tbilisi harshly condemned the actions of the occupation regime: “The recent sentencing is yet another example of Russia’s attempts to illegally control and exploit the Georgian regions of Abkhazia and South Ossetia. Russian actions threaten the lives, human rights, culture, and personal freedoms of people living in and near these Georgian territories, and deny them the ability to exercise rights and access opportunities that should be available to all Georgian citizens. Russia must reverse its recognition of the so-called independence of Abkhazia and South Ossetia and fulfill its obligation under the 2008 ceasefire agreement to withdraw its forces to pre-conflict positions and its commitment to provide unfettered access for the delivery of humanitarian assistance. We express solidarity with Mr. Gakheladze and his family, and all families who have had to endure Russia’s oppressive occupation.”

The meeting emphasized the importance of making use of diplomatic and legal mechanisms on an international level, and the recent ruling of the Court of Human Rights, including raising this issue at the highest level under the Geneva International Discussions and the Incident Prevention and Response Mechanism, for putting an end to illegal detentions and blatant violations of fundamental rights along the occupation lines.

The Georgian Government has called on the international community to increase pressure on the occupation regime in response to its provocative actions to prevent the illegal detention of Gakheladze and other citizens in Tskhinvali.

Commenting on the Gakheladze case, Head of the EU Delegation to Georgia Carl Hartzell said, “It raises a lot of concern. This is a case we have been following for months now, and we have been working through various instruments: the IPRM, the hotline, the Geneva Talks. This verdict, the follow-up to the illegal detention, is clearly a bad signal, something we take very seriously. We are urging for the immediate release from illegal detention. And we will be continuously following up on this issue. I am very grateful for being called to the Prime Minister’s Office to have a chance to discuss the situation. We are in full agreement on the need to continuously follow this issue very closely, because it is a concern.”

The meeting discussed steps taken by state institutions within their purviews to ensure the timely and safe return of the Georgian citizen illegally detained in occupied Tskhinvali.

The representatives of relevant agencies received instructions from the Prime Minister. The meeting emphasized that all diplomatic and legal mechanisms have been set in motion, and this issue will be raised on the highest level of all relevant international formats, including under the Geneva International Discussions, so that kidnapping and blatant violations of fundamental rights and freedoms along the occupation lines may be uprooted.

The Government of Georgia continues active efforts toward the mobilization of the international community, also urging its partners to provide an adequate response to yet another provocation by Russia’s occupation regime and take effective measures toward the immediate release of the illegally detained Georgian citizen.

Tskhinvali “Court” convicted Gakheladze on two counts of charges – Article 317 of the Russian Criminal Code (encroachment on the life of a law enforcement officer) and Article 322 (illegal crossing of the state border).

The Russian military detained Gakheladze on July 11, 2020, near Skhvilo Fortress. During the arrest, the Georgian citizen was shot in the leg.

Moscow and Tskhinvali claim Gakheladze “Tried to hide and fired about 10 shots towards the Russian servicemen.”