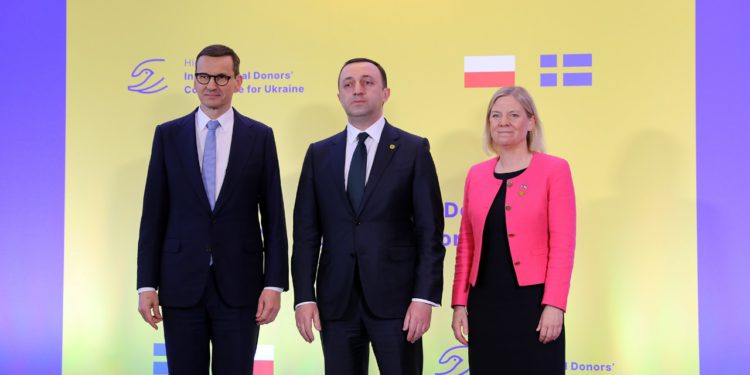 Irakli Garibashvili, Prime Minister of Georgia, participated in a High-Level International Donors Conference for Ukraine within the scope of his visit to the Republic of Poland, along with numerous other leaders of participating nations.

Garibashvili arrived at the national stadium of Warsaw, which was a designated venue for the high-level conference. He was greeted by Mateusz Morawiecki, Prime Minister of Poland, and Magdalena Andersson, Prime Minister of Sweden.

The High-Level International Donors Conference is co-hosted by the prime ministers of Poland and Sweden, in partnership with the presidents of the European Council and the European Commission. Participants of the conference reviewed the consequences of the war waged in Ukraine and discussed the solutions to the humanitarian and economic crisis.

The prime minister of Sweden, Spain, Ukraine, Lithuania, Latvia, Albania, Croatia, Iceland, Slovakia, Slovenia, and Norway were among the participants of the high-level conference.

Garibashvili addressed the participating leaders of states at a Pledging Session of the conference.

International Financial Institutions (IFIs), World Health Organization (WHO) and UN system institutions were engaged in the session along with various leaders of the world.

Georgian attendees of the High-Level International Donors Conference included Ilia Darchiashvili, Minister of Foreign Affairs of Georgia and H.E. Zurab Beridze, Ambassador Extraordinary and Plenipotentiary of Georgia to the Republic of Poland.