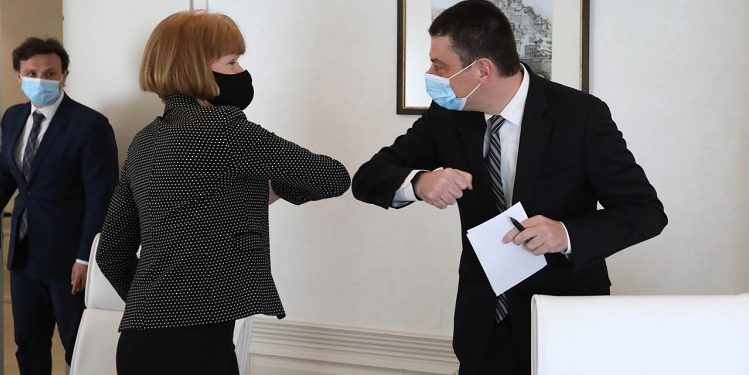 The PM expressed his gratitude to the British dignitary for visiting the country, and noted the significance of further active engagement of the UK

Issues related to the occupation, regional development, and the role of Georgia in a wider Black Sea region were key topics discussed by Giorgi Gakharia, Prime Minister of Georgia, and MP Wendy Morton, UK Parliamentary Under-Secretary of State for European Neighborhood and the Americas, at a meeting today.

The Georgian PM spoke about the harsh humanitarian situation witnessed at the occupied territories of Georgia, provocative actions demonstrated by the occupying power, including the detention of local residents in the vicinity of the occupation line, the “atrocious confinement” of Georgian citizen Zaza Gakheladze by Russian occupation forces, and his unlawful sentencing by the de-facto court of Tskhinvali.

Focus was put on the role of Georgia within the wider Black Sea region, and the special importance of British support towards this end. Discussions were also related to the need for further deepening of the bilateral cooperation between Georgia and the UK at the post-BREXIT phase. Interaction between the UK and Georgia was praised in areas like cyber security and the fight against the hybrid threats.

Challenges arising from the pandemic were also noted at the meeting. The PM highlighted the role of the UK in ensuring global accessibility to the vaccines.

The PM then expressed his gratitude to the British dignitary for visiting the country and noted the significance of a more active engagement of the UK, especially by taking into account the developments in the region.

After her meeting with the Prime Minister of Georgia, MP Wendy Morton, accompanied by the Head of Government Administration, visited the National Center of Crisis Management, which was established with British support.