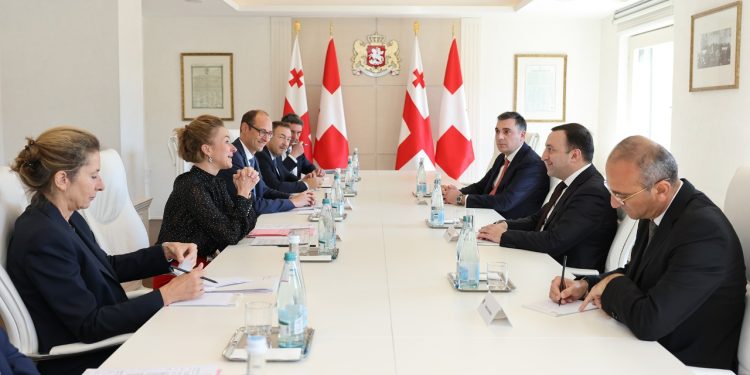 The parties discussed the close and friendly relations between Georgia and the Swiss Confederation in both bilateral and multilateral formats. The partnership between the two countries across a variety of areas-including close political, economic, and people-to-people contacts-was pointed out.

Garibashvili thanked the Swiss side for strongly supporting Georgia’s sovereignty and territorial integrity. The Prime Minister reaffirmed the Georgian Government’s commitment to the comprehensive policy of peaceful conflict resolution.

The conversation revolved around prospects of future cooperation and the importance of high-level meetings. In this context, the parties pointed out the recent meeting between Garibashvili and President of the Swiss Confederation Ignazio Cassis, held in September 2022, on the margins of the UN General Assembly in New York.

Special attention was paid to the importance of the programs of the Swiss Agency for Development and Cooperation (SDC) in ensuring Georgia’s socioeconomic and institutional transformation.

The meeting at the Government Administration was attended by Foreign Minister Ilia Darchiashvili and Georgia’s Ambassador Extraordinary and Plenipotentiary to the Swiss Confederation Revaz Lominadze from the Georgian side, and by Martin Candinas, First Vice President of the National Council of the Swiss Federation, also Second Vice President Eric Nussbaumer, Head of the International Relations Claudio Fischer, Political Advisor Sophie Lachat Rohrer, and the Ambassador Extraordinary and Plenipotentiary of the Swiss Confederation to Georgia, Heidi Grau, representing the visiting side.