PM Meets with Minister of National Defense of Romania, Discusses Future Ties in Area of Defense 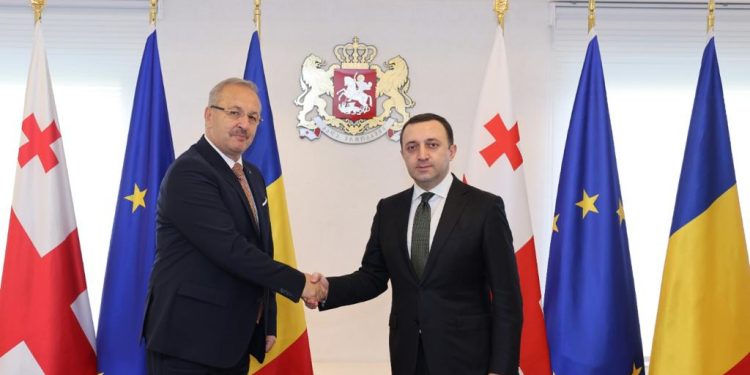 Georgia-Romania cooperation and relations with the EU and NATO were the key topics discussed at today’s meeting between Georgian Prime Minister Irakli Garibashvili and Vasile Dîncu, Minister of National Defense of Romania.

Special attention was paid to future ties in the area of defense. It was noted that the recently signed Declaration on the Establishment of Strategic Partnership will give fresh impetus to the close relations between the two countries across a variety of directions.

Garibashvili thanked Romania for its firm support of Georgia’s territorial integrity and sovereignty, and the country’s European and Euro-Atlantic aspirations. Romania’s considerable contribution to the EU Monitoring Mission was underlined.

In addition, attention was paid to the historic decision on granting the European perspective to Georgia, pointing out that the country’s authorities are committed to fulfilling assumed obligations in order to achieve rapid progress on the path to EU membership.

The conversation also touched on Georgia’s integration into NATO, with emphasis on Romania’s significant contribution to the implementation of the Substantial NATO-Georgia Package. The parties also discussed issues pertaining to Black Sea security.

The meeting at the Government Administration was attended by Defense Minister Juansher Burchuladze, the Head of the Directorate of International Cooperation at the National Defense Ministry of Romania, Vasile Ionescu, and the Ambassador Extraordinary and Plenipotentiary of Romania to Georgia, Răzvan Rotundu.