PM Meets with Delegation of US Congressmen 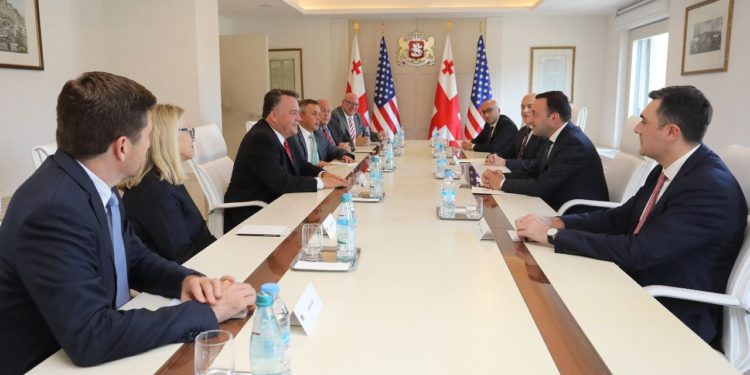 The congressmen are co-sponsors of the “Georgia Support Act” initiated by the US House of Representatives, for which the Prime Minister thanked them.

At the meeting, the US support for strengthening Georgia’s institutions, increasing its defense capabilities, and democratic reforms was underlined.

The Prime Minister thanked the congressmen for the US bipartisan support for Georgia’s sovereignty and territorial integrity, as well as for the peaceful settlement of the conflict, the policy of non-recognition, as well as Georgia’s Euro-Atlantic aspirations.

The meeting focused on the local self-government elections and underlined the readiness of the Government of Georgia to hold free, fair, and transparent elections. It was noted, the government welcomes the active involvement of observers from international organizations in the election process.

The security of the Black Sea was discussed at the meeting. It was noted that Georgia remains a reliable partner of the United States in the region.

The conversation focused on the situation in the occupied territories of Georgia. It was noted that the visit of the congressmen is especially important in the context of the difficult situation in the region, the illegal occupation of Georgian territories by Russia, continuous provocations, and “borderization.”

Georgia’s important role in international security and peacekeeping operations was underlined. The important role of Georgia in the implementation of the emergency evacuation process from Kabul was especially noted.

It was noted that further strengthening of trade and economic relations with the United States, as well as the start of free trade negotiations between Georgia and the United States, is one of the priorities of the Government of Georgia.