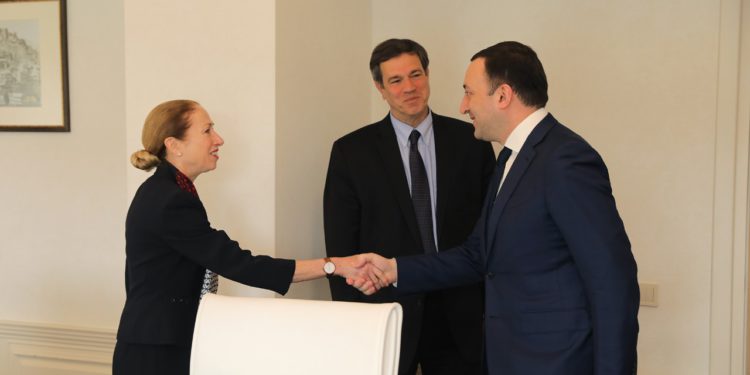 The war being waged in Ukraine, the security position in the region, and intensifying partnership between Georgia and USA were among the key topics discussed by Irakli Garibashvili, Prime Minister of Georgia, and H.E. Kelly C. Degnan, Ambassador Extraordinary and Plenipotentiary of the United States of America to Georgia today.

Garibashvili noted that Georgia firmly stands by the side of the international community and continues to provide political and practical support to Ukraine both in bilateral and multilateral formats, while the diplomatic corps of Georgia never stopped working in Kyiv, Odessa, or Lviv during the military activities.

It was noted at the meeting that the Government of Georgia has been providing vital humanitarian support to Ukraine from the very beginning of the war. Over 500 tons of humanitarian cargo have been sent to Ukraine and this process continues, while every possible support has been rendered to Ukrainian citizens fleeing to Georgia from every respective institution of the country.

The Prime Minister noted that Georgia is vigorously standing by Ukraine in multilateral formats and serves as a co-sponsor of international resolutions in support of Ukraine.

The meeting held at the Government Administration was attended by Ilia Darchiashvili, Minister of Foreign Affairs of Georgia.