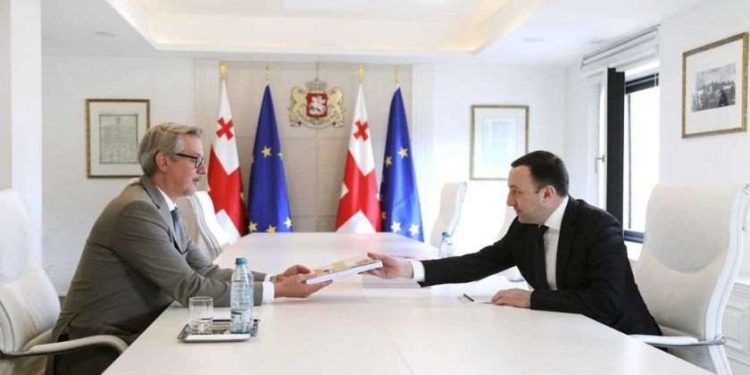 The Prime Minister of Georgia Irakli Garibashvili handed over the second part of the European Commission questionnaire to the Head of the EU Delegation to the EU Administration, Carl Hartzell.

“I am pleased to present the answers to the questionnaire. We have completed the filling, a total of 7 books have been published, and I am happy to give them to you. We look forward to understanding the decision of the European Commission and its member states,” he said.

The Ambassador thanked the Prime Minister of Georgia and noted that the questionnaire will greatly assist the European Commission in its assessment.

“Mr. Prime Minister, I am grateful to be here and to receive the results of your and many other people’s hard work in the second and final process of the questionnaire. It will help the European Commission determine the outcome,” Hartzell noted.

The second, sectoral part of the European Commission questionnaire includes 33 chapters, up to 2300 questions in all sectoral directions, and its delivery date was set by the European Union as 13 May. In order to fill the volume of the questionnaire effectively and in the shortest possible time, all relevant state agencies were involved, and the process was personally supervised by the Head of Government.

As the Prime Minister noted, the European choice of Georgia is the choice not only of the government, but also of the Georgian people.