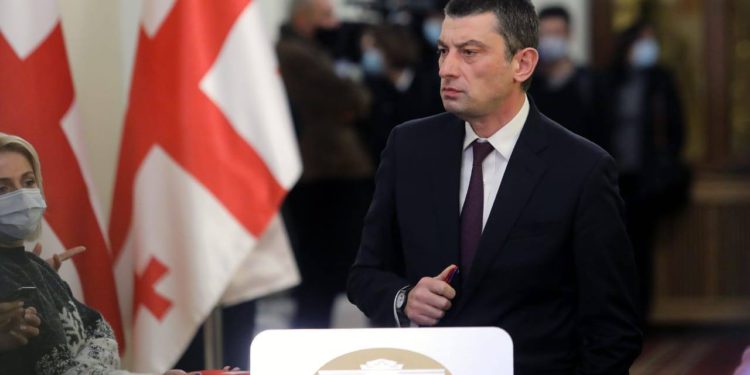 Prime Minister of Georgia Giorgi Gakharia spoke in detail about the Government Program labeled as For Building a European State at the Plenary Session of the Parliament.

“Government Program For Building a European State includes 4 key directions. The first one is economic advancement, the second one is social policy and human capital management, the third one is foreign policy, security, conflict resolution and human rights, the fourth one is among the most important – public administration. We need to underline here that these are the structural challenges and problems of the State, which will need to be addressed by anyone in the authorities. These are big changes. These challenges within this program will not be witnessed by anyone. The first and most important part of our program is the economic advancement of the country. When we talk about economic development, we all understand that the current structural challenge and problem of the State is to overcome poverty. One of the healthiest methods for doing it is job creation, of course. Free and strong Georgian business should create jobs and one of the natural and effective environments of operation is a free market,” he noted.

Giorgi Gakharia underlined that the private sector is the driving force, which should maintain jobs during the pandemic and then create new, additional employment opportunities.

“Nevertheless, we have said on numerous occasions that the social responsibility of a successful and strong Georgian business and private sector at large is the main and significant component, which should attract more and more attention. Macroeconomic stability is one of the most important components of an environment supporting the development in the private sector and businesses. It is currently seriously challenged under the global pandemic and resulting global economic crisis. You may well be aware that macroeconomic indicators of the State Budget of Georgia are seriously challenged and we need to do our best to make sure that they get back to the starting point and standard existing in 2020 within the next 3-4 years. Fiscal consolidation will be utterly important to achieve this goal, thus assigning a huge responsibility to the Ministry of Finance and its qualitative and effective performance. The same applies to the legislature, as we will have to take certain legislative measures to make our taxation system more effective,” he said.

In his opinion, legislative initiatives will be required to make the taxation system more effective in the country.

“We will have to take legislative initiatives to make our taxation system more effective. We currently have a lot of concessions, which are no longer effective. We will need to revisit them with greater scrutiny so that they make them stronger wherever possible and get them voided in the majority of cases, as the effectiveness of these tax concessions is questioned nowadays. Also, we will have to revisit some Tax Agreements together with this parliament. We may say today that steps need to be taken against the malpractices. When the legal framework of taxation is streamlined, when all the opportunities exist for businesses to use the tools of dispute resolution, mediation and others, the time has come to seriously revisit the Tax Agreements in the prism of effectiveness and fairness of relations between the State and businesses,” the PM noted.

At the same time, Giorgi Gakharia noted that a program ensuring access to universal healthcare will be continued further and its ultimate goal will be to make sure that socially vulnerable and needy citizens no longer pay out of pocket for treatment or medication under the healthcare management system of the country.

The second part of the Government Program is all about social policy and human capital management. It is not accidental to collate these two directions under one umbrella, added the Prime Minister.

In his opinion, this domain covers healthcare, social security and education, as the prime duty of the State is to care for the socially vulnerable and needy, elderly and all others, who require support.

“That is why the state policy towards the healthcare and social security of our citizens will be consistent and a logical continuation of what was launched in the last 8 years. Nevertheless and in parallel with this, when we refer to education and human capital management, we need to understand that every person able to feed and develop his or her family with decent work, should get equitable and competitive conditions by the State. It is our most important duty. Of course, it starts with the right of education and that is why reform in the education sector is one of the most important components of human capital management” he added.

Regarding healthcare and social security, Giorgi Gakharia believes that the main task of the Government of Georgia will be to continue the policy, which was started and resulted in universal access to healthcare.

“This program will be continued and its ultimate goal will be to avoid out-of-pocket payments by our citizens, particularly the socially vulnerable and needy. This applies to medication and healthcare management. Thus, universal healthcare will remain to be a priority and its reform will be continued in the part, which requires it. Primary healthcare is particularly important towards this end and it was clearly demonstrated in the fight with COVID pandemic, whereby primary healthcare turned out to be utterly important if not the most important in the fight with this challenge. Social allowances will remain a priority in terms of improving the assessment methodology and payment of such allowances. The Ministry of Health has already started to work towards this end. Sadly, the pandemic has delayed its completion. Nevertheless, this goal will be fully accomplished in 2021 and our citizens will witness a more accurate methodology for defining the degree of targeting the socially vulnerable population. Improved measurements will be used as well for setting the volume of support and we are already discussing it,” he noted.

In his opinion, the most important duty of the State is to care for its elderly. Gakharia added that the Government of Georgia managed to assure the increased pension payments at the legislative level, avoiding it to be an issue of political speculation.

The PM noted that 13 000 new units in residential blocks will be granted to internally displaced households in coming years.

“When we talk about social security programs, we should never forget our internally displaced persons. Irrespective of the fact that housing in dozens of thousands have been allocated to them in recent years, 13 000 new units within residential blocks will be granted to them in coming years. It is our duty shared between each citizen and State and we will take care of our IDPs wherever required” he added.

Giorgi Gakharia focused in his speech on the significance of education and human capital.

He paid particular attention to the occupation and stated that rational policy tailored to the interests of the country is the only opportunity to reinstate the territorial integrity of the country in a peaceful manner and no development of a country is complete without it.

Giorgi Gakharia spoke about a key chapter of the Government Program, which is the foreign policy, security, conflict resolution and human rights.

“Apart from being a duty, it is also a necessity to start this chapter with the occupation. Democratic development of the country, its security and human rights are the basis and foundation for the practical implementation of further European orientation of Georgia and occupation is one of such prerequisites. Thus, we should all understand that a rational policy tailored to the sovereign interests of the country is the only possibility for reinstating territorial integrity in a peaceful manner. Without it, the development of Georgia will be limited in any direction. Moreover, when we talk about occupation, we not only refer to the occupation of Georgian lands, we talk about our citizens and their human resources, their development prospects. Our country is limited in development in any area and any sector – starting from the economy and continuing with culture – with that 20%, which are occupied in Georgia. Hence, any format acceptable for the political interests of the country – bilateral or multilateral – should be deployed with a full engagement of our international partners to achieve the main and prime goal of ours and ultimately reinstate the territorial integrity of Georgia. First of all, we should increase pressure on Russia to make sure that it honors the internationally recognized commitments and extension of the EU Monitoring Mission mandate throughout Georgia. Primarily I mean the occupied territories, as it is the only opportunity to basically establish a tool of human rights protection for our citizens living on the other side of the occupation line,” he added.

The PM also focused his attention to the peace-keeping missions. He noted that work on the peace initiative will be continued and primarily for restoring the bridges and trust between our citizens, with our Abkhaz and Ossetian brothers.

He believes that international partners should be fully engaged in the restoration of territorial integrity in Georgia and in policymaking towards this end.

The Nominee Prime Minister of Georgia focused his attention on the significance of compatibility of the Georgian army with NATO forces and noted that availability of mobile, effective military forces in the country is the goal, which is effectively pursued by the Ministry of Defense of Georgia.

In his opinion, politically neutral and effective police, independent prosecution, army and state security service is the infrastructure, which ensures the security and safe environment in the country.

“Politically neutral and effective police, independent prosecution, army and state security service is the infrastructure, which ensures the security and safe environment in the country. We all need to understand that socially secure and assured policemen, fire-fighters, army officers are the backbone of the state, which should serve as a basis for national security,” noted Giorgi Gakharia.

The Prime Minister of Georgia paid special attention to the European and Euro-Atlantic integration of the country.