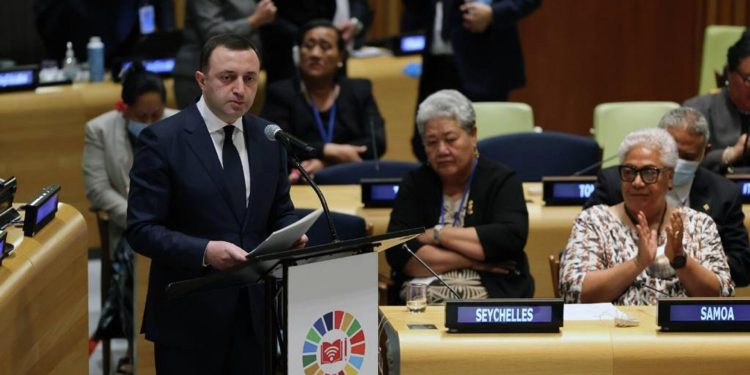 The Prime Minister of Georgia Irakli Garibashvili made a speech on September 22 at the 76th session of the UN General Assembly, underlining Russia’s efforts to undermine Ukraine’s territorial integrity and Georgia’s support for Ukraine.

“War is waging again, not far from the doorstep of my country. Russia’s full-fledged war in Ukraine undermines Ukraine’s territorial integrity and sovereignty, as well as the UN Charter and fundamental principles of international law,” said Garibashvili.

The PM also noted the actions taken by the Georgian government to issue political, humanitarian, and financial support to Ukraine.

“Georgia stands with Ukraine. Since the start of the war, our government has provided substantial humanitarian assistance to Ukraine, including the allocation of more than 1,000 tons of humanitarian aid. Georgia provides financial assistance and accommodation to over 32,000 Ukrainians currently residing in our country,” the PM
highlighted. “The Georgian education system has enrolled more than 1500 Ukrainian students, many of whom receive general education in the Ukrainian language according to the standard Ukrainian curricula,” he continued.

By sponsoring, joining, or supporting nearly 400 resolutions, statements, joint statements, and other initiatives in support of Ukraine at all major international organizations and institutions, Garibashvili further emphasized the Georgian government’s political support for Ukraine in the face of the Russian invasion.