PM: Euro-Atlantic Integration of the Country a Choice Made by Our Citizens 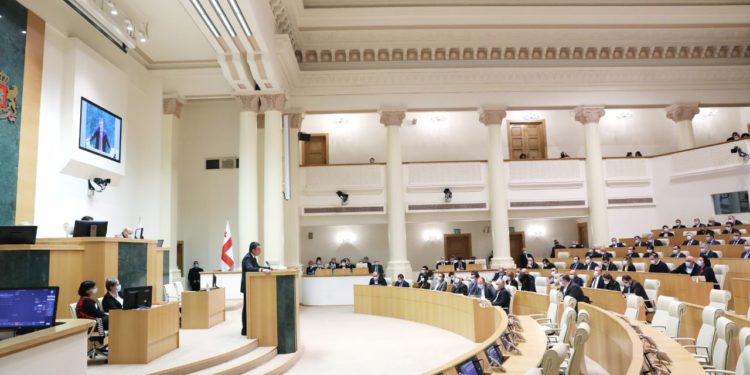 “When we talk about the European and Euro-Atlantic integration of the country, it is a choice made by our citizens,” Prime Minister of Georgia Giorgi Gakharia said at the Plenary Session of the Parliament when speaking about the Government Program labeled as For Building a European State.

“When we talk about the European and Euro-Atlantic integration of the country, it is a choice made by our citizens. They have been indicating this choice in social opinion polls for years. Most important here is that it is a value-based choice made by our citizens. It is what gives us a possibility to say that European and Euro-Atlantic integration of Georgia is an irreversible direction and choice. Hence, we all understand it well that cooperation with NATO in every format until the full-fledged membership into the alliance will be a top priority of any government in Georgia.

“I mean European and Euro-Atlantic integration and we need to do our best to make sure that within this cooperation Georgia acquires greater importance in various dimensions. Currently, such a crucial dimension is the  Black Sea Security and role of the country in the security dimension at large, within the security infrastructure of the Black Sea region,” noted Giorgi Gakharia.

The Prime Minister believes that strategic partnership with the US makes the security of the country stronger, enables our defense forces to improve their capabilities and supports the process of democracy in Georgia.

“When we talk about the European and Euro-Atlantic integration of the country, the main focus should be made on our strategic partnership with the USA. We all need to understand that this strategic partnership makes the security of the country stronger, enables our defense forces to annually improve their capabilities and supports the process of democracy in Georgia. These are most important and crucial. They need to advance to a higher level in the coming years to grow into the economic dimension. Cooperation in this field and the Free Trade Agreement will be utterly important. We may confess that initially, it will be more a political message for the region and the country, but let me assure you that gradually this agreement and economic dimension of strategic partnership will be increased more with the time,” he noted.

He also noted that when irresponsible politicians fail to conceptualize their share of responsibility and when they do not engage in the development of the country, the public sector should protect the interests of citizens and stay politically absolutely neutral.

Giorgi Gakharia noted that 2021 and especially its second half will be for recovering the economic potential of the country when Georgia will succeed in making its important message in the global post-COVID economic competition both within the region and globally.

“We have to work, perform, take action in an unordinary environment. Global pandemic and development of events in the region, global economic crisis and all those political challenges and process of democracy, which is witnessed in the country in a rather difficult manner are all part of it. Our voters have instructed us to jointly respond to all these challenges,” added the Prime Minister.