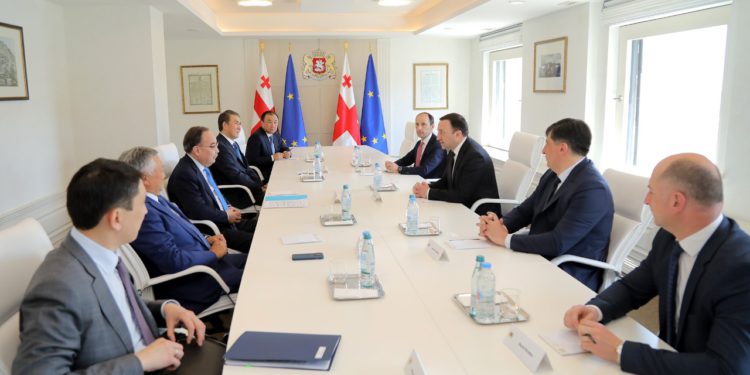 Irakli Garibashvili, Prime Minister of Georgia met the Kazakh Delegation led by Yerzhan Kazikhan, Special Representative of the President of the Republic of Kazakhstan for Foreign Affairs.

The dignitaries discussed the close partnership existing between Georgia and Kazakhstan, along with prospects of future cooperation. Special attention was made on the trade and economic cooperation and the significance of the 11th Session of the Intergovernmental Economic Commission of Kazakhstan and Georgia to be held in Tbilisi in the nearest future within this context.

It was noted at the meeting that trade volumes in the first three months of the current year and past year have been sharply increased, though as Garibashvili noted, huge potential exists in parallel with the positive trend towards further boosting the trade and economic relations. The significance of the effective deployment of the transit potential of Georgia and the wider region of the South Caucasus has been underlined. Also, it was noted that Georgia welcomes Kazakh investors. Discussions were also related to prospects of future cooperation in the fields of agriculture and transport.

Garibashvili expressed his gratitude to the Kazakh side for supporting the sovereignty and territorial integrity of Georgia and for the non-recognition policy. Primer Minister reiterated the commitment of the central authorities towards a peaceful conflict resolution policy.

Current military activities witnessed in Ukraine were also discussed. It was noted that Georgia is supporting Ukraine in a political and diplomatic manner, inter alia within the vital international formats, thereby providing humanitarian aid to the people of Ukraine.

At the meeting, reference was made to the fact that 2022 is a special year in the bilateral relations of Georgia and Kazakhstan, as the nations are celebrating the thirtieth anniversary of diplomatic relations.

Meeting held at the Government Administration was from the Kazakh side attended by: H.E. Baurzhan Mukhamejanov, Ambassador Extraordinary and Plenipotentiary of the Republic of Kazakhstan to Georgia; Asset Issekeshev, Assistant to the President of the Republic of Kazakhstan; Magzum Mirzagaliev, CEP pf KazMunayGas and Nurlan Sauranbaev, CEO of Kazakhstan Railways. Attendees from the Georgian side included: Levan Davitashvili, Deputy Prime Minister and Minister of Economy and Sustainable Development; Ioseb Tkemaladze, Adviser to the Prime Minister of Georgia and David Peradze, CEO of Georgian Railway JSC.