PM: Anaklia Port is to be Built with Co-Participation of State, whereby 51% will be Owned by State by Our Decision 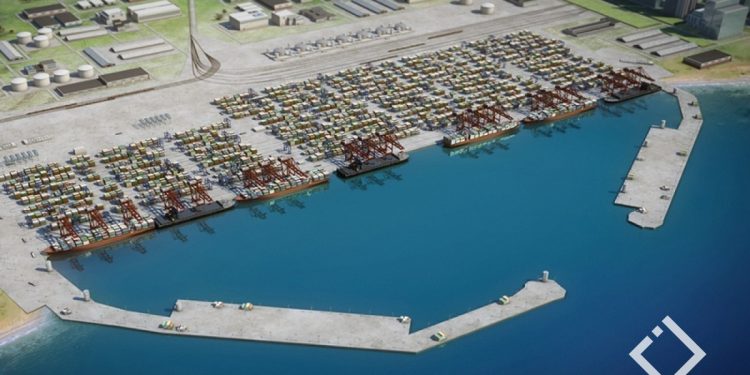 “Anaklia Port will be built with co-participation of the State, whereby 51% will be owned by the State by our decision, while the rest will be tendered internationally and partners, partner companies will be selected,” stated by Irakli Garibashvili, Prime Minister of Georgia.

He spoke about the current situation at Anaklia Port and noted that since signing an agreement with an investor in 2016, no commitment was honored by the latter and the port never got built, which is a classic example of larceny.

“Second agenda item, which I wish the general public to know about, is related to Anaklia Port. Back in 2016 we made a decision to build the port. You all witnessed that. Prior to that, during my first tenure in the capacity of the Prime Minister of Georgia, we openly spoke about this topic everywhere. Every rostrum and platform was used, including that of the UN HQ to make our expressed interest and priority known in building the port and agreement was signed in 2016, investor was selected and you are all aware who is this so-called investor, who failed to deliver his commitment, i.e. he failed to build this port. Though, in line with the assumed commitment, we should have admitted first vessels in 2020, if I am not mistaken. Government deferred the deadlines for the commitment several times – 3 or 4 times, if I am not wrong. Nevertheless, the investor failed to attract further investments. Messrs. Khazaradze and Japaridze have in between them as partners spent 3 MLN USD. To my knowledge, the rest has been raised from investors – about 20 or 25 MLN USD. In return, they were seeking assurances from the Government on guaranteed cargo volumes. Land was our and we were requested to hand it over. We did. Roads and railways were built to the site. Hundreds of millions were to be spent by the Government to receive nothing in return. In real terms, this was expected to be a gift to Mr. Khazaradze. After dropping this project and failing to implement it for 4-5 years, these individuals decided to rob our country and why do we have this assumption? They sued against the country and took the case further to the court of arbitrage. They are currently claiming 1.5 BLN USD. Imagine what is happening? These individuals failed to deliver on their commitment, failed the project, could not build the port and are now demanding 1.5 BLN USD from our country and people. This is a classic scheme of Larsen and we all know it, of course. No genuine, sincere or honest goal or intention was ever backing this port construction and it was simply a way to make them rich through theft.

That is why, we are now – and you may well remember about it – working actively towards this end, as I instructed the Ministry of Economy several months ago and we are preparing a new tender – a competitive selection – but the main news is that we decided to build the Anaklia Port with co-participation of the state, whereby 51% will be owned by the state and international contest will be announced on the rest. We will select partners – partner companies. This is the significant news, which I wanted to share with our public. The site itself is abandoned and derelict. You may well be aware of what is happening now in Anaklia. Site has turned into a bowl of dust. It is categorically unacceptable and we need to select the international partner companies now and we also need to start investing in this project. It will be implemented with our co-participation. State will carry out this endeavor in partnership with foreign or other companies. It is our decision,” added the Prime Minister of Georgia.