PM: After our Ruling Party Came to Power, Unprecedented Period of Peaceful and Stable Development Has Existed in Our Country 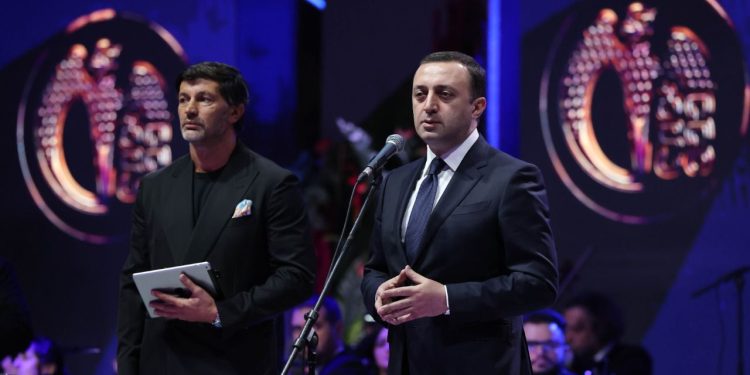 “Tbilisi is distinguished by its history, culture, and multiethnic and multiconfessional community. Indeed, Tbilisi sets a unique example of tolerance. Here in this city, representatives of various religions, ethnic groups or nationalities have coexisted in love for centuries, and this is what this amazing city has created,” Georgian Prime Minister Irakli Garibashvili stated in his speech at awarding ceremony of Tbilisi’s honorary citizens.

“Good evening, dear friends, esteemed audience. It is a great honor to be celebrating the Tbilisoba town festival together with you.

“I would like to address you with a few words and express what an honor and joy it is to be one of the special countries with a unique history, and our capital, Tbilisi, is distinguished by its history, culture, multiethnic and multiconfessional community. Indeed, Tbilisi sets a truly unique example of tolerance.

“Here in this city, for centuries representatives of various religions, ethnic groups or nationalities have coexisted in love, and this is what this amazing city has created. From this stage, I would like to join you and thank my friend, Tbilisi Mayor Kakha Kaladze. Kakha has done and is doing a lot for our city indeed, and we are confident that he will do more for our capital. It is a great honor to be attending this ceremony. On behalf of the Government and of my own, I reassure you of our respect. I once again greet our honorary citizens, honorary Tbilisi residents. Please accept the assurances of our respect and love,” the Prime Minister said.

As he noted, on October 1, they marked the 10th anniversary of the Georgian Dream’s coming to power. After the ruling force’s coming to power, he added, a period of peaceful and stable development started in the country.

“On October 1, we celebrated the 10th anniversary of our ruling party’s, the ruling force’s, coming to power, marking the beginning of an unprecedentedly continuous period of peace and stable development in the country. Dear friends, what we need today is peace, stability, and development. Our people need greater prosperity, and we will do more to make our biggest dream come true and achieve our main goal, which is our country’s unification. Our country, its significant portion, is temporarily occupied, but I am convinced that Georgia will be united. Thank you very much!” Garibashvili stated.

The event’s guests were also addressed with a speech by Tbilisi Mayor Kakha Kaladze.

Within the scope of the events planned to celebrate Tbilisoba 2022, an awarding ceremony of Tbilisi’s honorary citizens was held at the Ceremonial Palace of Georgia.

The awarding ceremony of honorary citizens was attended by representatives of the executive and legislative branches, and of the diplomatic corps.