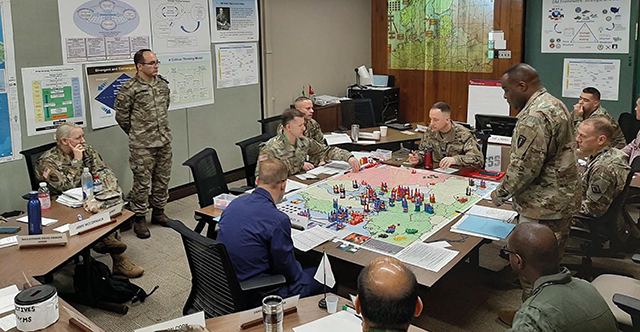 Few people today can ignore the incredible popularity of video games. Whether a fan, a parent of a young gamer, or simply a casual observer, visual entertainment and games are clearly everywhere. Video games have an over $90 billion market size and are slated to grow at approximately 2.3% over the next few years. However, youth and the young-at-heart are not the only ones getting in on the action.
Military organizations and educational institutions have not ignored this form of media. From tactical simulation programs that replicate combat situations to traditional board game style platforms that are designed to make the player balance military strategy with political consequences, commanders are embracing wargaming.

For many of the more senior, or seasoned, defense and security observers, wargaming is an old pastime. Entire weekends spent around a table with friends, snacks or beer in hand, engaging in global conflict and political intrigue on a board. Starting with the classic “Risk” to some of the more in-depth and complicated games such as Axis & Allies, these games have carved out their own niche in the gaming industry.

Using this approach to leadership and command education is nothing new. The idea of “gaming” the possible strategies against a notional foe is almost as old as warfare itself. However, with technology comes new opportunities to use this to advance the level of education for our military leaders.

To date, military leadership has been using both the board and computers to help hone their skills. As modern warfare becomes far more nuanced than centuries past, critical thinking is just as much a part of warfighting as weaponry and doctrinal tactics. Despite this, many senior command leaderships are rooted in outdated or ineffective methods of instruction, particularly those with a foundation based in Soviet military doctrine.

Before these commanders envelope themselves in tabletop battlefields, it is important for those with apprehensions to assess them. These exercises are not what many associate with the board games sold in stores or the likes of Dungeons & Dragons. The wargaming programs used today blur the line between reality and training. As a result, commanders come out with experience in potential real world scenarios and planning skills that encourage them to think outside of the proverbial “box” of doctrine.

Encouraging this level of autonomy in brigade, battalion, and even company commanders is invaluable, particularly against fast-moving and cunning foes such as Russia. The new and upcoming Georgian military commanders are also from a generation that embraces such technologies. Pairing the new talent with the wargaming solutions that amplify their decision making abilities is a natural match.

Just as chess is a game of forethought, so should the focus of wargaming in military education be. It is not different from the comparison of amateur chess players and chess grandmasters. Amateurs have been studied and found to typically think 3 to 10 moves deep when preparing to make a move. Comparatively, some of the greatest players around the world, chess grandmasters, have been noted as planning up to 30, 40, or even 50 moves deep.

Plans are worthless, but planning is everything. – Dwight D. Eisenhower

Eisenhower’s quote above outlines this perfectly. The ability of a leader to simply have plans ready does nothing, but planning the repercussions, subsequent actions, the consequences of those actions, and so on pushes leaders to a deeper plane of thought when making tactical decisions. The next generation of Georgian military leadership will need to begin thinking less like the high school chess champion, and more like the global grandmasters.

For implementation, the aforementioned reluctance for senior commanders will need to be addressed. For them to gather around a conference table littered with tables and charts, game pieces and dice, and a large game board with terrain features and flora, would potentially seem beneath their status.

It is for this reason exactly that they need to confer on the matter of strategy and tactics on the notional battlefield. Just as with the lowly private soldier, training and honing their skills with the fundamentals of rifle marksmanship and maneuvering, so too must these battle staff officers hone their skills on the basics.

However, wargaming brings many advantages. The first recognizable benefit is the greatly reduced cost of exercises at the higher level. Naturally, buying or developing a wargaming simulation is far more cost effective than mustering entire battalions for a large exercise off in some remote space of the country.The ability to conduct this on an “ad hoc” basis is another potential benefit. Wargame organizers can create and execute a training session on short notice. In addition, the objective, scenario, or narrative of the simulation can be drawn either from historical events or from the potential future, created by the experienced staff hosting the wargame.

With existing examples of this being used at the United States Army War College and the Modern Warfare Institute at West Point, Georgia has the template to create their own “school of war.” For Georgia to create this new department of military education, there are some key notes the dean of this school should keep in mind.

Whereas traditional household wargames focus on the military objective and a “red versus blue” bilateral model, modern military wargames must take into account many more factors. Rather than simply having two sides facing each other down, the socio-political components must be included, and out of the direct control of the players (military officers in training). Civilian populations of various ethnic groups, political parties of both sides, Non-Governmental Organizations (NGOs), paramilitary groups of both hostile and friendly disposition, as well as many others, depending on the specific scenario, are all realistic parts of the modern battlefield.

Each one of these third parties has their own objectives and effects on the primary plates in the scenario, influencing decisions and reacting consequentially to their actions. As a result, each third party begins to outnumber the “enemy” force each player initially perceives as the primary objective of the game. This introduces another facet of wargaming that sets it apart.

Modern warfare is not simply taking objectives and winning battles, but is also information driven and narrative centric. Each third party will begin to develop a narrative of the environment being simulated. This narrative is the basis for how they view each other player, how they choose to aid or impede their progress in the game, and ultimately dictates the potential for success of the primary players being tested.

Combining the depth of thought with the multi-layered and multi-faceted environment of military wargaming builds the strategic minds of commanders. When executed together, the exercise begins to look like something not dissimilar to that of a traditional field training exercise. Complete with multiple days spent in seclusion, a complex and rich wargame scenario, and a rapidly changing tactical environment, this is where the next strategic geniuses are born.

To do this as a multi-day exercise, with each primary team composed of various battle staff officers, would be an excellent experiment in mental flexibility in military leadership. The time spent in between wargaming sessions would act as an incubator for the creativity of the battle staff involved. This creativity is the petri dish of new military schools of thought and a place to revolutionize military doctrine.
In addition to these two primary teams, tertiary teams controlling various other elements of aforementioned civilians, NGOs, and others will be organized and instructed to simulate their respective peoples. When available, these tertiary teams can even be represented and controlled by players who are or experienced in working in those roles; a former NGO executive, a foreign aid worker, a retired politician, etc.

This new endeavor is not without its challenges. To truly replicate the vast complexities of the modern and near-future battlefield is virtually impossible. However, to give senior commanders a glimpse into what could be, or what is most likely for the country, is to give them increased mental acuity and elasticity. This is to aid in foreseeing the effects of their decisions on a grand scale and on multiple affected parties, rather than just the enemy.

Georgian commanders have had the friendship and partnership of many of the West’s greatest resources, both from individuals and from institutions. Some of Georgia’s leading commanders have even spent much of their military education abroad in Europe and the United States, expanding their capabilities. This can easily be brought home and expanded by the use of advanced wargaming regimens. Georgia’s schooling for both new and seasoned commanders lends itself to this new age in military strategic education.