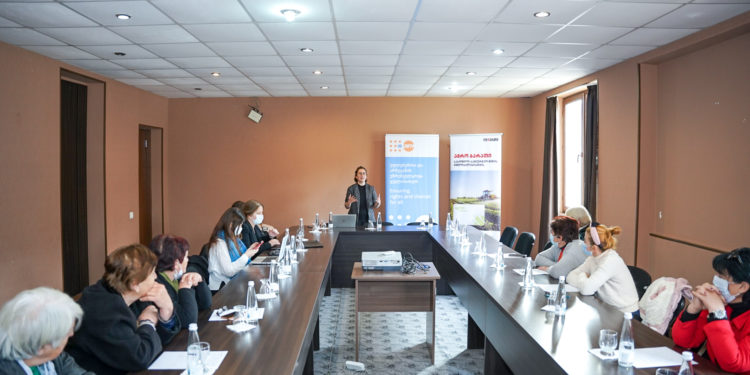 A new series of meetings launched at the joint initiative of the Food and Agriculture Organization (FAO), the United Nations Development Program (UNDP), the United Nations Population Fund (UNFPA) and Liberty Bank in the regions of Georgia is in progress. The purpose of the meetings is to raise the awareness of gender equality, reproductive health and rights, community participation, women’s economic empowerment, as well as of banking services among rural women, that will benefit women involved in agriculture. 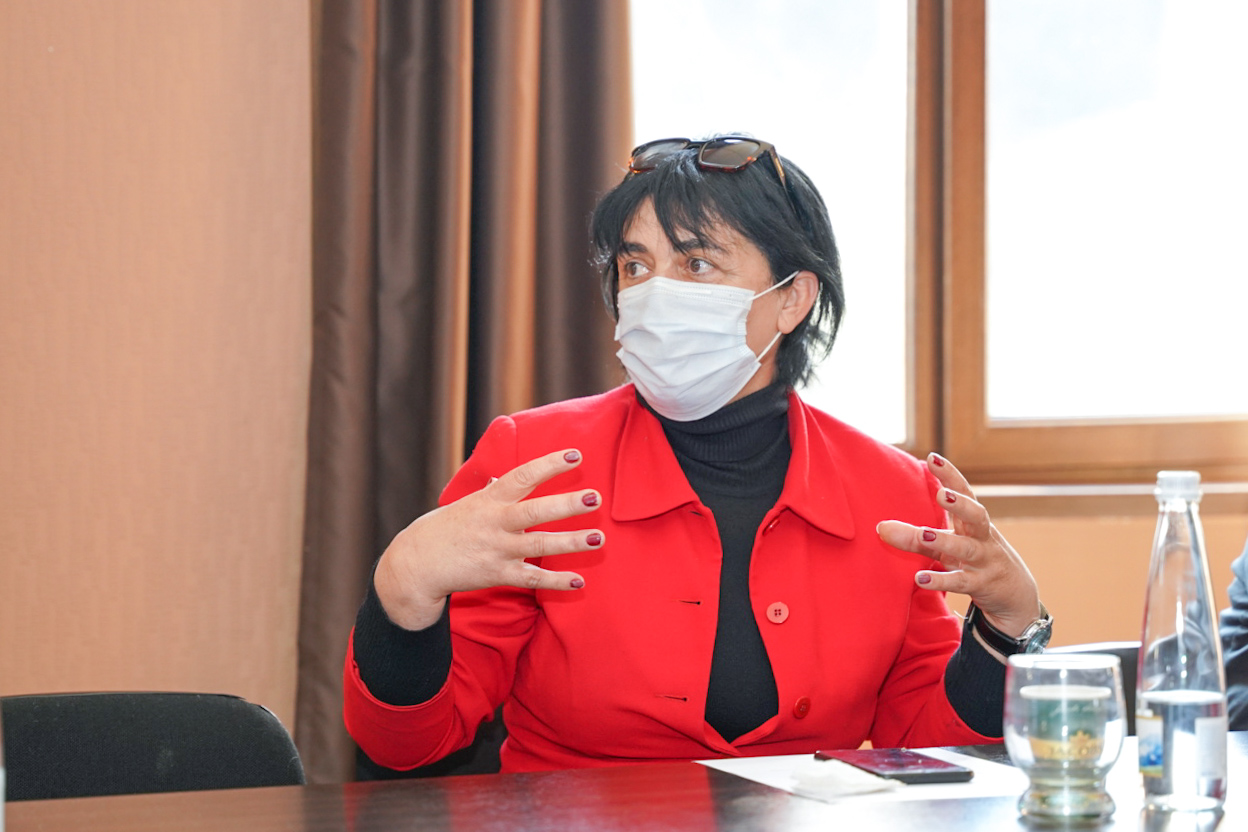 “I am really pleased that, as part of the 16 Days of Activism against Gender-Based Violence, UN agencies have joined forces and, in partnership with the private sector, have planned awareness meetings. These meetings aim to increase men’s engagement in ensuring women’s economic empowerment and gender equality,” says Ms Ia Mirazanashvili, Gender Focal Point of FAO Georgia.

On December 16, 2021, the next awareness meeting took place in Hotel Metekhara in Ambrolauri. Women living in Racha and Lechkhumi region and involved in the FAO Agriculture and Rural Development Project (sponsored by the Austrian Development Cooperation (ADC)) attended the meeting. They were informed about the issues such as family planning, prevention of uterine and breast cancer, domestic violence, harmful practices (early marriage, gender selection), the role of gender equality in the development of business and agriculture, financial planning and banking services offered to women involved in agriculture by Liberty Bank. The event was opened by representatives of the Food and Agriculture Organization of the United Nations (FAO), the United Nations Development Program (UNDP), the United Nations Population Fund (UNFPA) and Liberty Bank.

According to Ms Mariam Bandzeladze, Gender Analyst at the United Nations Population Fund (UNFPA) Georgia Country Office, “Achieving gender equality remains a significant challenge for Georgia, so the joint effort of UN agencies to reach as many women and men as possible across the country is crucial. Ensuring women’s reproductive health and rights, empowering women and adolescent girls, as well as increasing men’s involvement in the process of building a more equal society remain among UNFPA’s top priorities. We continue working actively to increase the number of our partners, both institutions and individuals.”

“The United Nations Development Program (UNDP) actively supports rural women in acquiring and developing the skills necessary for economic activities and active participation in the labour market. At the same time, we believe that such awareness meetings also play an important role in empowering women, as raising awareness and sharing experiences is important for strengthening their collective representation,” says Ms Natia Tsikvadze, Policy and Capacity Development Specialist at United Nations Development Programme (UNDP) in Georgia.

The meetings have been held in partnership with Liberty Bank for two years now. “Our new strategy “New Liberty for a New Life” involves offering a number of innovations to customers. We will continue to support women and create affordable products for their empowerment. In addition, one of the important directions of the new strategy of Liberty Bank is to use our largest banking infrastructure, offer services tailored to the needs of customers and develop agribusiness in the region,” says Mr Irakli Abashidze, Deputy Director in Direction of Small and Medium Business at Liberty Bank. 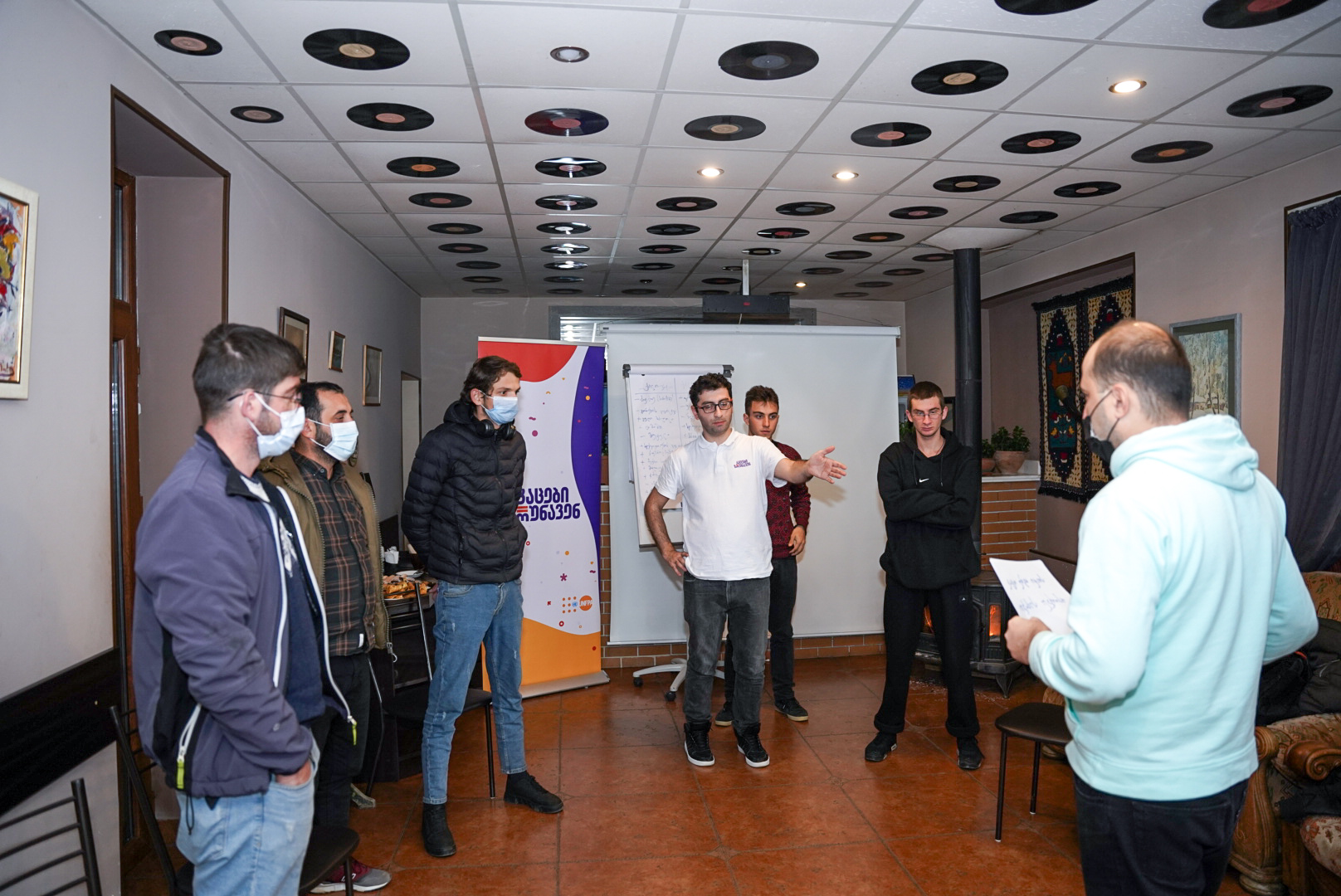 At the same time, a training session “Men Talking to Men” was conducted as part of the cooperation between the UNFPA and FAO. “Men Talking to Men” is a campaign conducted by the United Nations Population Fund (UNFPA) since 2016 to help increase the engagement of men in the process of achieving gender equality.  Integrating “Men Talking to Men” campaign in the joint initiative is a good opportunity for men, who are in business and agriculture, to understand the importance of gender equality in the field they are involved, which will have a positive impact on productivity, teamwork and output, and will reduce the risk of men stirring up gender stereotypes.