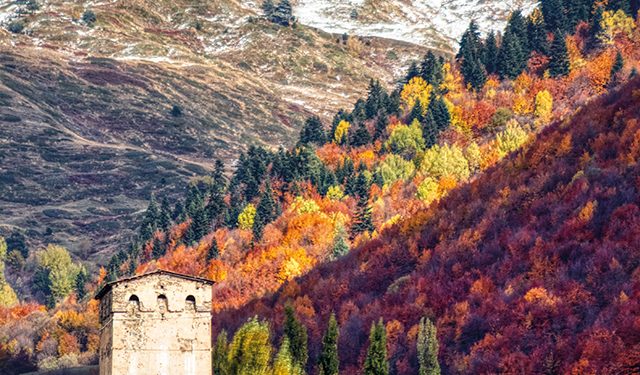 What, for me, goes into the making of a photo which I would call one of my landscape masterpieces? Quite a lot. The photo with this article is one such.

I have photographed this scene many, MANY times over the past 12 years from the upstairs windows. Different seasons, different lightings and weathers, times of day, compositions. This last one, taken just a few days before we leave Svaneti to winter in Tbilisi for the first time, was a nice farewell for me.

Landscape pictures have two main elements in their making: the scene itself, and the lighting of it in one or more variations. You can notice the first element and then decide that now is the time, or at least take a shot for reference and keep on returning for as many versions of the second element as you like or need. You might also say that a third element will come later: your post-processing of each frame in various different ways.

We had stayed long enough in Etseri to catch the full glory of autumn here, and to boot, I drove a guest all the way through Becho, Mestia and Ushguli the week earlier. So I got to see everywhere the magnificent combination of early winter snows settling lightly on top of the fall leaf colors.

Now, while I have been inspired to shift most of my photography in the last year or two to black and white, I do find it really hard to capture the glories of autumn without color. So I abandoned my monochrome purism in most cases these last weeks and went with what the landscapes were telling me.
Ansel Adams, America’s best landscape photographer ever, shot mostly in black and white and mostly using sheet film of large sizes, up to 8 by 10 inches. His important trilogy of books on his craft is called The Camera, The Negative and The Print. He still has much to teach us today, though no longer alive. His idea that a finished photographic print, worthy of exhibition, may well convey more of what the viewer expects to see than “actual reality” resonates with me. Who, except the truly color-blind, sees the world all in black and white anyway, for example?

As for color photos: they may represent idealized versions of what is actually there. It can be easy to over-saturate them or perform other tricks to move them away from “reality”. In these cases, we may be producing work which is better suited to being called photographic art than “pure” photography (all boundary lines here admittedly being blurred and very subjective). I usually aim for something which is saturated enough, if in color, to be true to what people see in general.

The shot of the Dadeshkeliani tower, tallest in all Svaneti, happened because I noticed the view from downstairs, first. I often look for it and a few other favorite shots. It was a day of mixed cloud and sunshine, which can mean lighting conditions changing even by the second, so I grabbed my camera and raced upstairs before things could be altered much. This is more my style than waiting for hours for weather conditions to line up just right: I simply don’t have the time for that at the moment!

Already familiar with various horizontal- and vertical-format compositions of the scene, I chose the vertical one based on colors and lighting. I know exactly where to stand to minimize the distraction of house roofs or other architecture, obscuring them as much as possible with trees in front. The diagonal slashes of color running through the scene were also key, as was the fairly plain light blue sky. Almost the whole spectrum of visible colors is present, which I admit is rare for this scene. The sprinkling of snow adding inter-seasonal drama was a perfect bonus: hours later it had receded considerably in the heat of the day.

I emphasized the colors with some light color correction and HDR (high dynamic range) processing, and it was done. Well, it only took a few seconds, plus 12 years of waiting and trying. 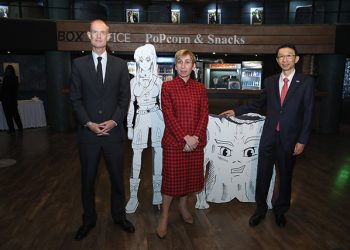