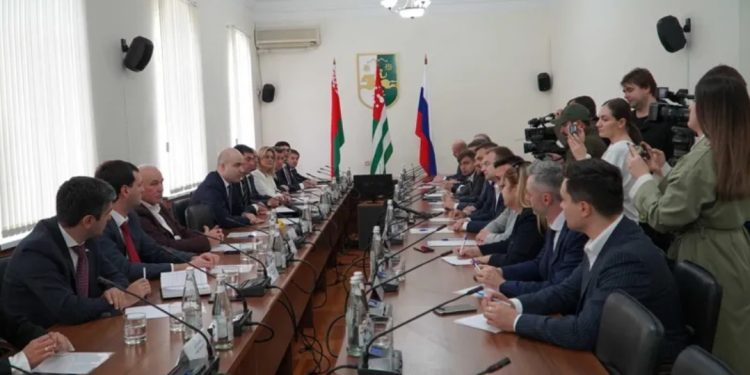 The Parliamentary Assembly of the Union of Belarus and Russia, led by Artyom Turov, the chairman of the Youth Policy, Sports and Tourism Commission, arrived in occupied Abkhazia, Abkhazian and Belarusian media reports.

The delegation includes the deputy chairman of the commission Sergey Klishevich, the members of the commission – Dmitry Baskov, Olga Petrashova, Anton Tkachev and the executive secretary of the Parliamentary Assembly Sergey Strelchenko. In Sokhumi, within the framework of the so-called visit, a meeting of the representatives of the Parliamentary Assembly was held with the de facto president of the “republic” of Abkhazia, Aslan Bzhania.

The media reports that the deputies thanked the “president” for the reception and noted the importance of developing relations with the “republic” of Abkhazia in the humanitarian, political and economic spheres and expressed their belief that the peoples united by common values, culture and faith will be able to jointly respond to the challenges they face.

The de facto president of Abkhazia spoke about the importance of deepening “relations” at the level of the “legislative, executive, and various government structures” and expressed his belief that each such meeting would strengthen the friendship between the people of Abkhazia, Russia and Belarus.

A meeting of the so-called chairman of the facto parliament of Abkhazia, Lasha Ashuba, and the deputies of the Assembly was also held.

The deputies of the Parliamentary Assembly spoke about the development of Belarus-Russia relations in the fields of youth policy, sports and tourism. They noted the potential of the “republic” of Abkhazia in the mentioned areas and expressed their readiness to strengthen efforts in this direction.

On his part, Lasha Ashuba emphasized the importance of the meeting and confirmed his positive attitude towards the deepening of “relations and cooperation”.

“As for the relationship with the Parliamentary Assembly of the Union of Belarus and Russia, we have a relationship that will be 15 years old in October 2023. In October 2008 in Moscow, in response to the appeal of the parliaments of Abkhazia and South Ossetia, it was decided that the parliaments of our countries were granted permanent observer status within the framework of the relevant association. We will always be grateful for the support of the leadership of the Parliamentary Assembly and its deputies. This was a very important decision for us,” chairman of the facto parliament of Abkhazia, Lasha Ashuba, said.